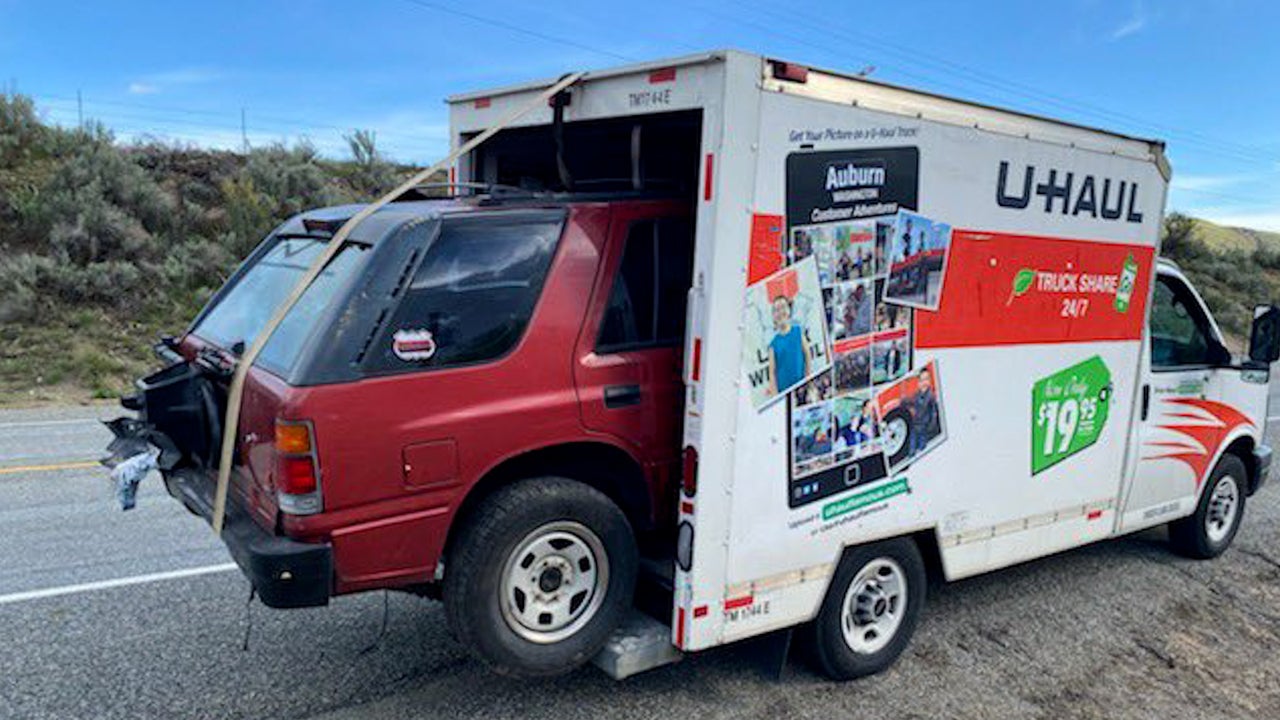 It’s not every day a driver is seen hauling an SUV inside a U-Haul truck. But that recently occurred on a two-lane highway four hours east of Seattle, Washington. Even worse: the SUV was only being held by one strap, officials said.

“That’s kind of the things we look at, we as troopers,” Bryant told Inside Edition Digital, noting another officer spotted the U-Haul while it was in motion. “Should this be driving on the road? Is it safe?

“If you look at the photos, it’s hazardous,” he continued. “I mean, there’s no bones about it. No matter how many comments I get on social media saying, ‘Well, it’s not that bad.’ It is pretty bad. It’s not a good thing.”

Officers pulled the driver over, and looked into his situation. “They discovered that his license was suspended, and he had a warrant out for a previous suspension where he did not show up for court,” Bryant said.

In addition, the rented U-Haul was overdue, Bryant said.

“U-Haul was upset, to put it mildly, that their vehicle hadn’t been returned in quite a while,” he said. “I don’t know what the number of days were, and that day the manager told our trooper that they were actually going to list the vehicle as stolen because it hadn’t been returned.”

The U-Haul driver was cited $139 by Washington State Troopers for an unsecured load. The motorist will now have to deal with a suspended license, the warrant issued in the previous incident and U-Haul. But, as Bryant stated, the situation could have been a lot worse for the driver.

“A lot of folks will walk on the side of the road,” he said. “So if that thing bounces out of there, hits a pedestrian, or hits a car, the things that you can imagine that could happen would be not good.”

Overall, Bryant said, the best thing for people to do while driving is to be smart and safe.

“Safety on the roadways,” he said. “Besides the, ‘watch your speed, don’t drive impaired, wear a seatbelt,’ and things like that. But it’s the other little things. Watch what you’re doing. Don’t follow too close. Try and be kind to each other while driving on the road.”