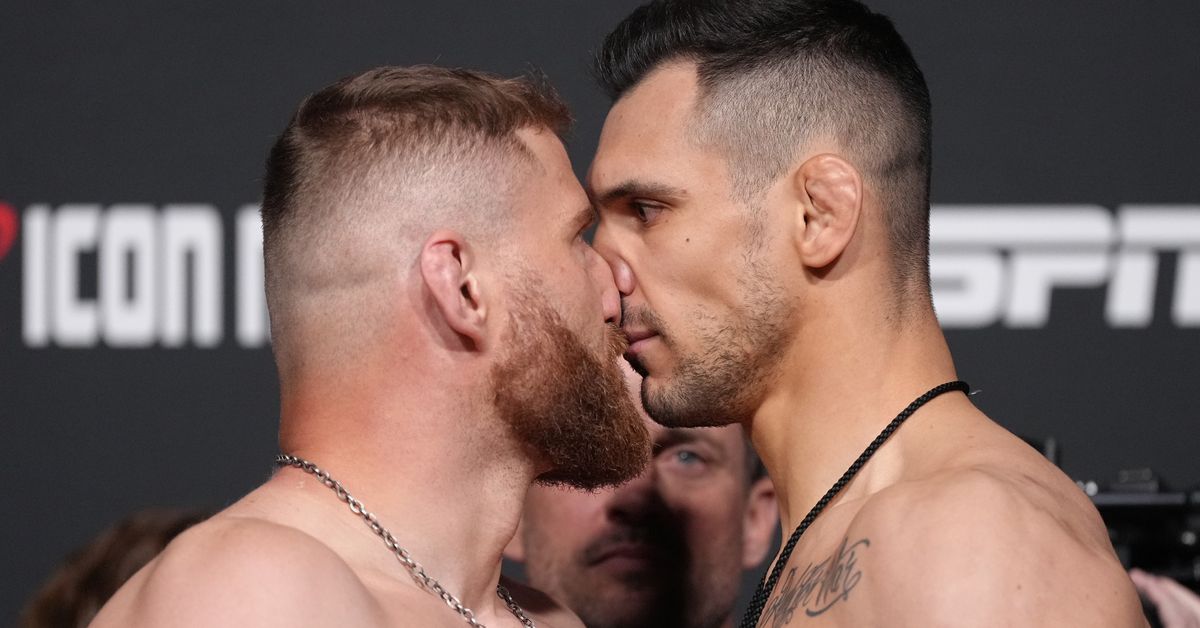 With UFC 274 in the rear-view and full of talking points, and yet another Fight Night card this evening, there’s no time to muck about. So let’s talk about the fights tonight, Charles Oliveira, Carla Esparza, Michael Chandler, and Alexander Volkanovski.

is the UFC rooting for both Rakic and Jiri to win? Feel like they could begin a great fresh rivalry in a lackluster LHW division.

Those are probably the results they would prefer, and for exactly the reason you state. But I doubt they care too terribly much what happens, because even if both Glover Teixeira and Jan Blachowicz win, the UFC can simply pivot to the winner of Magomed Ankalaev vs. Anthony Smith for the next title shot. In a perfect world, both Jiri Prochazka and Aleksandar Rakic win and then the UFC has options, plus they have a host of great fights available and, seemingly out of nowhere, they have three relatively young contenders atop the division, something they haven’t had in years.

In the end though, this is all probably moot, because Ankalaev is going to get the belt within a year, and for as good as he is, that’s not a dude they’re going to be able to market all that well. He can be an exciting fighter, but he’s not really marketable, and that’s just the way it is. What was once the UFC’s most marquee division is now among its worst. 2022, y’all.

Assuming the winner of Blachowicz-Rakic gets a title shot, how do each of them fare vs. either Texeira or Prochazka? (Would Jan be able to adjust in a Glover rematch?)

We just saw this one, and while Jan could adjust, it was so decisive I feel like Glover is overwhelmingly likely to simply be able to do it every time.

I would favor Rakic for the same reason I favor him over Blachowicz, Glover is 1000 years old and Rakic is younger, faster, and works at a much higher pace. Glover always has the opportunity to score takedowns and get a submission, something that Jan is less like to offer against Rakic, but Glover also is more hittable and more hurtable on the feet than Jan. I think Rakic dings him up.

This would be awesome. The Legendary Polish Power vs. Czech Chaos. I think Jiri is the best or second-best light heavyweight in the world right now (possibly behind Ankalaev), and I’ve never been fully sold on Jan’s actual punching power, so I would favor Jiri to do some full Tazmanian Devil nonsense and KO Jan, but I’d love to see the fight.

This is the most likely of the fights for us to get and coincidentally, it is the best one. Prochazka is incredible and has the most violent peaks, but Rakic is fundamentally solid and has the higher floor. Either Jiri breaks out some hyper-violence or Rakic just sort of tunes him up with a more complete game over the course of 25 minutes. I could see either happening and, one way or another, we will see this fight before both men retire.

I’ve got a hypothetical, put Conor McGregor in Charles Oliveira’s position on the scale last Thursday. What happens differently from the weigh in to the post fight? And in this hypothetical Conor does everything the Charles did

Honestly, Conor McGregor is probably the lightweight champion of the world right now. Not saying it’s right (it isn’t), but it’s hard for me to see the UFC being sticklers about anything with Conor, because they have basically never been so before. My best guess is that Conor would have hoped the cage, yelled at UFC President Dana White to give him the belt, and Dana would have. And instead of adhering to their rules, Dana would be at the post-fight press conference making all the same arguments that everyone now is making for why Oliveira should be the champion.

The reality is, it is both sort of stupid that Oliveira isn’t champion and sort of not. The sport has rules, he broke them. That’s on him. At the same time, as I’ve said for years, weight classes are kind of dumb, and considering an overwhelming majority of lightweight contests take place at 156 or less, it’s a bit dim for Oliveira to be punished here, since I don’t see anyone saying it was the extra .5 pounds that made the difference in that fight.

In spirit, Oliveira is still the champion, he’s just not in name. And that’s as it should be. Because for as dumb as all of this is, the dumbest thing is that he didn’t make the weight. Oliveira was given an extra hour to cut a half a pound. I would give anything to know what he did during that time, but it strains credulity to think he couldn’t have lost it. And if he legitimately couldn’t have, well then again, that’s on him. Play stupid games, win stupid prizes. If the UFC crowns him champion despite the miss, that’s setting a precedent for any champion to disregard the rules moving forward. And since challengers would 100% not get that benefit, you simply can’t do it.

In your mind is Carla Esparza currently, or has she ever been, one of the top 3 strawweights in the world?

This depends on how we’re establishing “best.” If “best” is a term with regard to accomplishment, then absolutely. Esparza is currently the best strawweight in the world (by the book) and was also in the top-three when she initially won the belt off of The Ultimate Fighter. If “best” means, “Do I think she’s better than everyone else?” Then no, she is not currently in the top three, though she was number three when she won the title behind Claudia Gadelha and Joanna Jedrzejczyk.

Taking nothing away from what Esparza has a accomplished, I am extremely confident that Jessica Andrade, Weili Zhang, and Marina Rodriguez would all beat her if they fought this summer. I would also feel pretty confident about Rose Namajunas beating her, but given the horror show we just witnessed in their rematch, I don’t begrudge anyone who disagrees. And then there comes women like Mackenzie Dern or Amanda Ribas, who I wouldn’t be stunned if Carla beat them, but I would also favor to beat her. She’s still not the UFC champion who would have been a better underdog to the most people though. That title will remain forever with Michael Bisping.

How would you rate and interpret the Michael Chandler signing 4 fights in? Was it one of the best signings in recent UFC history??

It has to be an A-plus. The only signing I can remember who has delivered more in their first four fights with the promotion is Justin Gaethje (two “Fight of the Year” winners, another one that was second in FOTY to a different Gaethje fight, and a “Knockout of the Year” contender). Chandler, who for large parts of his Bellator career was not the most exciting guy, has seemingly recognized that father time is coming for him, so he is going for broke in the short span he has left. The dude has exceeded every expectation anyone could have for him and established himself as a legit star, and must-see TV. Even I, one of the most well-established Michael Chandler haters in the world, have to admit that the dude is captivating right now.

It’s still lame how he’s no-selling Dustin Poirier because he got his feelings hurt, though.

How many title defenses should a champ have before they are able to challenge for a second belt? Is it circumstantial in your mind or is there a specific number?

I’m answering this one because recently, Alexander Volkanovski has been saying he wants to move up to lightweight if he beats Max Holloway for a third time, and while I understand it, I also hate it.

First of all, lightweight is a fustercluck right now. Islam Makhachev should be fighting for the belt, but he’s probably going to have to fight Beneil Dariush and then Oliveira will fight Conor or something, which will delay Islam’s fighting even further. And with Islam quite possibly being the best lightweight alive, and someone who would almost certainly ragdoll Volkanovski, having Volkanovski move up to either lose immediately, or lose next year, is very dumb. Let’s get some clarity in the division before we force more double champs into existence.

Second, fighters should have to clean out their division (or abandon their title) if they want to move up. Volkanovski is an exceptional fighter, but if he moves up, he will have done so with four title defense, two of them against the same guy — the dude he took the belt from. That is FAR from cleaning out the division. The hardest thing to do in this sport is defend a title over and over again. It’s why we have so few champions with double-digit title defenses. In most instances, I wish the UFC would go back to make fighters finish their divisions before starting a new level.

And lastly, for a guy who, when the UFC wanted to rebook a trilogy fight with Max immediately after the second one said, “I want new blood,” well, he’s not really living up to that. Volkanovski has beaten exactly three top-15 ranked featherweights, the men he’s defended his belt against and now he wants to bail on the division because no one has made a case. Garbage. Pick one and go. Were people screaming for Anderson Silva to fight Patrick Cote? No. But he had a job to do and he did it and his resume is all the better for it.

Whenever any champion talks about moving divisions to get a second title, it all means the same thing. They want the opportunity to cement themselves in the GOAT conversation (even though two belts does not do that), they believe it will make them more marketable, and it’s an all upside, not downside roll of the dice. Either they win and get everything, or they lose and no one blames them because they moved up a weight class. Just look at Israel Adesanya. He tried, he failed, and no one holds it against him or his legacy.

If a fighter wants to pursue a second title, I want them to have cleaned out their weight class (beaten at least five people in the current top-10), and it not disrupt natural challengers in the other weight class. Or they can vacate their title and take an actual gamble instead of playing with house money. I’m fine with that, too.

Thanks for reading and thank you for everyone who sent in Tweets! Do you have any burning questions about things at least somewhat related to combat sports? Then you’re in luck, because you can send your Hot Tweets to me, @JedKMeshew, and I will answer them! Doesn’t matter if they’re topical or insane. Send them to me and I’ll answer the ones I like the most. Let’s have fun.