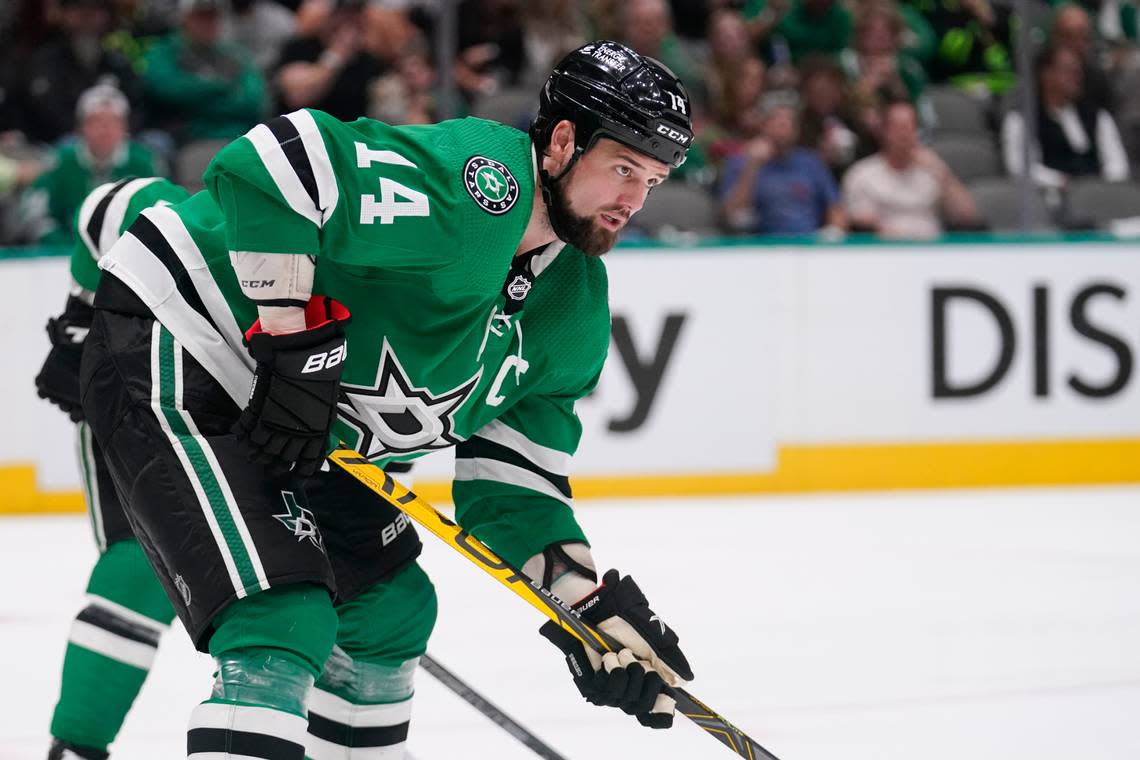 There is almost nothing left to suggest one of the best players in the history of the Dallas Stars will ever be the player he was, but his teammates have given Jamie Benn the chance to prove he’s not toast.

Benn is still “The Captain,” but the mileage has changed the man.

When the Stars lost the Stanley Cup Final in 2020, no player took it harder than Benn. He knew how hard it is to reach that destination.

He probably knew something else, too.

That the player he was is likely gone.

He has been handed the perfect chance to show he has something left.

On Friday night, the Stars avoided elimination from the NHL’s Stanley Cup playoffs with a rousing 4-2 win over the Calgary Flames at the American Airlines Center.

The Stars took a 2-0 lead before Calgary tied it in the second period.

The Stars’ best player, defenseman Miro Heiskanen, broke the tie with a beautiful wrister, and goalie Jake Oettinger made it hold.

The following doesn’t happen much, so enjoy it:

On Sunday at 7 p.m. the Dallas Mavericks will play Phoenix Suns in Game 7 of the NBA’s Western Conference semifinals.

At 8:30 p.m., the Dallas Stars will play the Calgary Flames in Game 7 of the NHL’s Western Conference quarterfinals.

Of all the Stars players who need to show up on Sunday night, Benn just can’t vanish. He has to do more than shoot from the blue line, or threaten to drop the gloves with some random Flames forward.

If Benn can’t generate positive offensive chances for a Game 7, the Stars have a major problem moving forward.

Benn has done almost nothing through the first six games of this series; he has one assist.

He has not scored a goal in 12 straight playoff games.

Benn is the second-highest paid player on the Stars, and he’s basically turned into a third-line player.

Players age, some better than others.

Because of the way he plays the game, Benn’s aging process was always ripe to be terrible.

He plays so heavy, and hard, that all of the contact has consequences.

It’s not as if Benn is mailing it in. He’s not stealing money.

He played all 82 games this season, and finished with 46 points.

His scoring average started its dive beginning in the 2018-’19 season.

It’s hard to watch a player who was once so much fun to see check, pass, punch, skate, shoot and score no longer able to do what he once did.

Players put in the work. They try. They push.

It’s just not there any more.

When the Stars were in the Stanley Cup “bubble” in Edmonton in 2020, Benn showed signs that his dominating days were done.

But the player who carried some truly average Stars teams for years would re-appear, and in playoff series wins against Colorado and Vegas he was outstanding.

The Stars have not seen that player since the 2020 Western Conference Finals.

What they have seen is a 32-year-old player doing the best he can, and the points no longer follow.

Benn is under contract for three more years at $9.5 million in each of those remaining seasons.

The Stars are not going to eat this contract, and cut their Captain.

They have at least one more game remaining in their season, and Benn has one more chance to prove what he has left.

If he has anything at all.