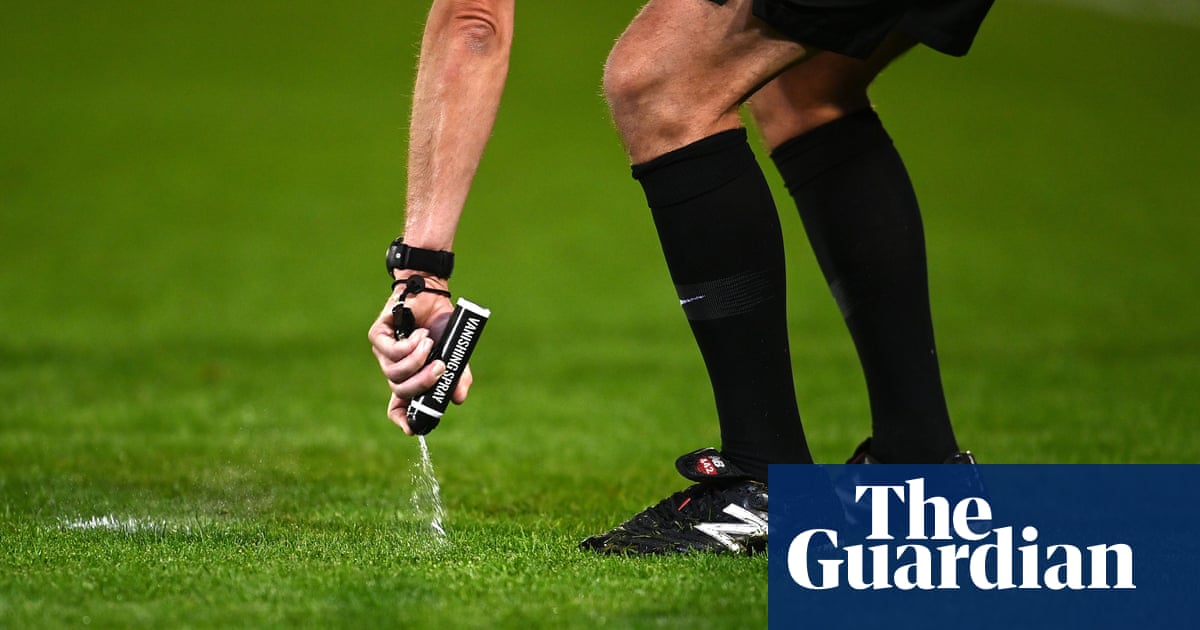 The Premier League paid £12.26m to implement VAR in the 2019-20 season. Whatever your views on VAR, there is no way anyone can claim it has eradicated refereeing controversies. By contrast, vanishing spray is freely available online for £6.99 per can, and there are no longer any disputes over retreating at free-kicks in the professional game.

There is something mystical about the power of the vanishing spray. I cannot recall seeing any team trying to disobey the spray. Once it’s marked out, it seems to placate even the most unruly centre-half into retreating behind the spray’s forcefield. You rarely witness any attempts to argue where the line is, as routinely happens with corner takers trying to place the ball on the furthest speck of the white line.

There is a valid debate surrounding VAR that controversies contribute to the joy of watching football. Goalline technology has worked almost perfectly, but also removed the fun of knowing your side have got away with the opposition’s clearly over-the-line goal not being given. Moreover, at £200,000 per stadium to set up and £3,000 per game afterwards, it’s unavailable below the Championship.

It’s important that the vanishing spray is so affordable. A chunk of the equality of the Laws of the Game from Sunday league upwards vanished once goalline technology began in the Premier League in 2013-14. The price of VAR has heightened that, but the £6.99 spray – mostly a mix of water, butane and vegetable oil – reintroduces utopian socialism to Hackney Marshes. For an extra £1, anyone wanting to cosplay as Graham Scott can buy both spray and the shorts holster in which to hold it.

While chaos is king for post-match talking points, surely only a gamesmanship addict enjoyed the pantomime of a four-man wall stealing a few yards once the ref’s back was turned. Those days are gone, and if that means one less time-wasting tactic is available to Wycombe Wanderers, we can all celebrate. Nobody talks fondly of the days when failing to retreat 10 yards at a free-kick meant an automatic booking, yet was treated with the same lax attitude as goalkeepers only holding the ball for six seconds.

It’s fitting the spray was created by a fan fed up of defensive wall time-wasting. Watching his country’s 2-1 win over Argentina on TV in the 1999 Copa América, Brazilian businessman Heine Allemagne had a Eureka moment on hearing the commentator despair: “Will anyone ever find a way of keeping the wall in place?” Although Allemagne had not previously invented anything, he enlisted a cosmetics factory to help perfect the spray’s formula. Within a year, it was used in amateur Brazilian football. By the time Brazil hosted the 2014 World Cup, vanishing spray was ready to go worldwide.

With Fifa now involved, the tale inevitably gets murky. Weeks before confirming the spray’s use at the World Cup, Fifa offered Allemagne $500,000 (£380,000). Correctly predicting his invention’s time had come, Allemagne said no. Eight years and various court cases later, Fifa still have not paid up. That’s infuriating for someone whose invention has, much like the best referees, improved football in a calm and unobtrusive manner. Bar the slapstick of referee Istvan Kovacs accidentally spraying a player in the face in a Romanian cup semi-final in 2018, spray controversies are hard to find.

Indeed, so ubiquitous is the spray’s use, nobody has settled on what to call it, nor what brand to use: there are at least three on sale, with only Forza featuring any obvious branding. Allemagne called it 9.15 Fair Play, instantly confusing Brits, who failed to see that’s 10 yards in metric. If, like the TV remote having a myriad of nicknames, nobody settles on what to call vanishing/free-kick/refs’ spray, so be it. Everyone knows VAR’s name, but it’s the spray that’s the unsung foamy hero.