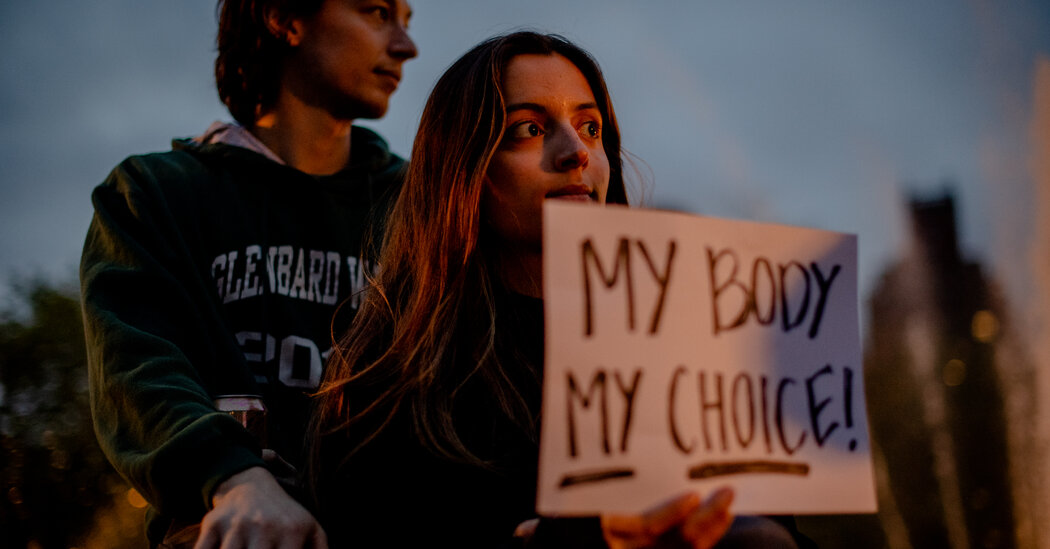 In the post-Roe America that abortion rights advocates say they have long seen coming, pregnant women in many states will have to scrape together money, book hotels, arrange child care and board buses, trains and planes bound for places that provide safe abortions. New York will be one of them.

It is both a vision of the uncertain future and a very real portrait of the past.

New York has long been seen as a sanctuary for out-of-state patients seeking to terminate their pregnancies. The state legalized abortion in 1970, three years before Roe v. Wade established a constitutional right to the procedure.

The New York law allowed abortions within 24 weeks of pregnancy, and at any time if the woman’s life was at risk. In the two years after it passed, nearly two-thirds of the more than 400,000 abortions performed in New York were for women who had come from elsewhere, health officials estimated.

One of those women was Teresa Meade, now 73, whose friends drove her to New York from Massachusetts in 1971 after they raised several hundred dollars for the trip.

“New York was just known as being the closest and most accessible, and also New York was known for having clinics where it was very efficient and sympathetic,” Ms. Meade said in an interview.

Now, with the Supreme Court seemingly poised to overturn Roe, advocates, abortion providers and lawmakers are working to strengthen existing protections in New York, and gear up once again for a potential surge of out-of-state patients.

Local leaders of abortion funds, which assist people who face financial and logistical barriers, are ramping up fund-raising efforts. Providers are studying the law to understand whether they are protected if they treat patients from states where abortion is illegal. Community groups are spreading the word about medication abortions.

But the preparation didn’t start this month. The past few years, during which a rising number of states have restricted access, have been like practice, abortion fund workers said. Nearly 9 percent of abortions performed in New York in 2019 were for out-of-state residents, according to the Centers for Disease Control, compared with 4.1 percent in 2009.

They have been using the time to raise money and strengthen relationships, not only with abortion clinics, but also hotels and car rental companies.

“The movement has been sounding the alarm for years,” said Chelsea Williams-Diggs, a board member of the New York Abortion Access Fund, a volunteer-driven abortion fund.

A legislative push to solidify rights

In 2019, sensing that Roe might not always be around, New York officials passed the Reproductive Health Act, which codified the right to abortion and allowed the procedure after 24 weeks of pregnancy in cases where the fetus wasn’t viable or the health of the mother was at risk.

Thirteen states have trigger laws that would ban abortion if Roe is overturned, and officials in several are seeking to punish patients who seek care elsewhere and doctors who provide it.

From Opinion: A Challenge to Roe v. Wade

Lawmakers have introduced a number of bills aimed at supporting providers, including measures that would shield them from certain legal liability and prohibit law enforcement from cooperating with out-of-state investigations on abortion cases.

There is also an amendment, sponsored by State Senator Liz Krueger, that would enshrine the right to abortion in the state Constitution, one of many measures on the table that would strengthen and expand abortion rights.

Without solidifying these protections into law, New York cannot guarantee that it will remain a center of safe abortion care, said Sasha Neha Ahuja, the national director of strategic partnerships for Planned Parenthood.

“We like to think New York is protected,” Ms. Ahuja said. “Now is the time to really step up and make that possible for folks that are seeking care.”

On Tuesday, Gov. Kathy Hochul announced a $35 million fund for reproductive health clinics that she said were already treating an influx of out-of-state patients. Unlike the legislative options under consideration, Governor Hochul’s action went into effect immediately.

Most of the money, $25 million, is being funneled to providers through the state health department, while the remaining $10 million is going to grants for security, which Ms. Hochul framed as critical given violent attacks on abortion providers or clinics.

Many Republicans in the Legislature oppose such actions, calling them a waste of government resources. “Abortion rights are protected in New York, regardless of the Supreme Court’s ultimate decision. New York Democrats are fully aware of that,” said Assemblyman Will Barclay, the minority leader, adding that the plan to spend millions was “unfortunate and unnecessary.”

When someone seeking help contacts an abortion fund, a representative starts booking flights or rental cars, arranging travel to a clinic and a night (or more) at a hotel. Envisioning potential hurdles, the funds provide everything from cash for a parking garage to multiple days’ worth of child care to credit card authorization forms for clients who have to borrow cards from the fund.

Patients who contact the Brigid Alliance, a group based in New York that assists with logistical costs, usually travel about 1,000 miles to get care, said Odile Schalit, the group’s executive director, and their needs typically amount to about $1,000.

As of early May, the New York Abortion Access Fund had pledged about $350,000 this year to people seeking abortions, more than twice the $150,000 it had promised by this point last year.

For Ms. Williams-Diggs and Karla Salguero, two of the fund’s board members, it is too soon to tell whether last week’s leak of the draft Supreme Court decision overturning Roe has directly translated into a surge of out-of-state interest.

But they have seen a steady uptick in calls in recent months from outside New York, especially from the South.

Last September, Texas passed a law effectively banning abortion in the state, kicking off the most recent wave of restrictions across the country. In the eight months since, the fund has helped 28 callers from Texas, compared with just five callers in the previous eight-month period.

When the Brigid Alliance began in 2018, the organization helped about 20 patients a month, Ms. Schalit said. Now, it supports as many as 125 monthly, a number she said was directly connected to the heightened restrictions in states like Texas and Mississippi.

“We are expecting that the number of people who need to travel to New York or states like New York is going to grow,” Ms. Schalit said. “We’re expecting a dramatic increase, no question.”

‘I tremble to think about what could have happened’

For Representative Gwen Moore, a Wisconsin Democrat representing Milwaukee, securing a safe abortion in New York in 1972 would never have been possible without the help of an abortion fund based in Wisconsin.

“I had no money,” Ms. Moore said. “I tremble to think about what could have happened.”

She was about 20 years old, she said, and studying at Marquette University. She already had one child, whom her family was helping her raise.

The State of Roe v. Wade

What is Roe v. Wade? Roe v. Wade is a landmark Supreme court decision that legalized abortion across the United States. The 7-2 ruling was announced on Jan. 22, 1973. Justice Harry A. Blackmun, a modest Midwestern Republican and a defender of the right to abortion, wrote the majority opinion.

What was the case about? The ruling struck down laws in many states that had barred abortion, declaring that they could not ban the procedure before the point at which a fetus can survive outside the womb. That point, known as fetal viability, was around 28 weeks when Roe was decided. Today, most experts estimate it to be about 23 or 24 weeks.

What else did the case do? Roe v. Wade created a framework to govern abortion regulation based on the trimesters of pregnancy. In the first trimester, it allowed almost no regulations. In the second, it allowed regulations to protect women’s health. In the third, it allowed states to ban abortions so long as exceptions were made to protect the life and health of the mother. In 1992, the court tossed that framework, while affirming Roe’s essential holding.

A second child would have forced her to drop out of school and would have stretched her family’s resources to the limit. But she couldn’t afford to travel to New York, let alone pay for an abortion.

“What you hear people say,” Ms. Moore said, “Black and brown women are going to bear the brunt of not making abortion accessible — I was that person.”

Representative Moore, who is Black, happened to have befriended several women who were white and middle class, and had a phone number for an abortion fund in Madison.

Within a few days, she was on a plane to New York, her first time ever traveling there. The abortion fund had arranged for someone to pick her up at the airport and take her to a clinic.

Hours later, she was headed home. All of the costs had been covered.

“I have had no regrets, not one day of regrets, for having terminated that pregnancy,” she said. “It was for me, my little girl and my future family, my two sons that I had. I did it for them.”

But she emphasized that she was one of the lucky ones, having made connections who had more resources than she did, and she was relieved when the broader protections afforded by Roe kicked in.

The idea that Black people with fewer means may now have to find their own way to New York infuriates her, she said.

But Ms. Meade said she was not surprised.

“We have been expecting this,” Ms. Meade, a retired history professor who lives in Harlem, said of the draft ruling, adding that reading it still felt “like a sucker punch.”

“The naïveté of it was so amazing,” she said. “They’re living in a world that made no sense.”

Ms. Meade was 22 in 1971 when she was raped by four men at gunpoint in Connecticut as she waited for a bus to visit friends in Boston.

She said the assault began after the men pulled her into a car. Then they took her to a motel, where it continued. “It went on for a long time,” she said.

One of the men got her pregnant. She said it was well-known at the time that New York was the place to go for a safe and legal abortion, so her friends helped her scrape together money and drove her.

“When you come through a traumatic event, the last thing in the world you need is to have to drive to another state,” Ms. Meade said.

Merle Hoffman, 76, who founded one of the first abortion clinics in the country, Choices Women’s Medical Center in Queens, recalled the busy years before Roe was decided.

Representatives from Manhattan clinics would meet women seeking abortions at airports or bus stations, wearing lapel pins to identify themselves. Her clinic’s first patient, in 1971, was from New Jersey, where abortions were still illegal.

Ms. Hoffman said that in the past six or seven years, as more states have moved to restrict the procedure, the clinic has revived its program to help out-of-town patients. They come from a range of states, as well as Bermuda and Jamaica.

If the Supreme Court strikes down Roe, she expects demand to surge. “It’s going to be a lot of poor and minority women,” she said. “The main reason that so many women have abortions is because of economic stress and pressure.”

She says her clinic, which sees up to 40,000 patients per year, about half of whom need abortions, will be ready. It works closely with abortion funds to pay for the procedures, travel and lodging.

“And we will continue to do that,” she said, “I don’t care how many bans they put in place. We’re standing here.”