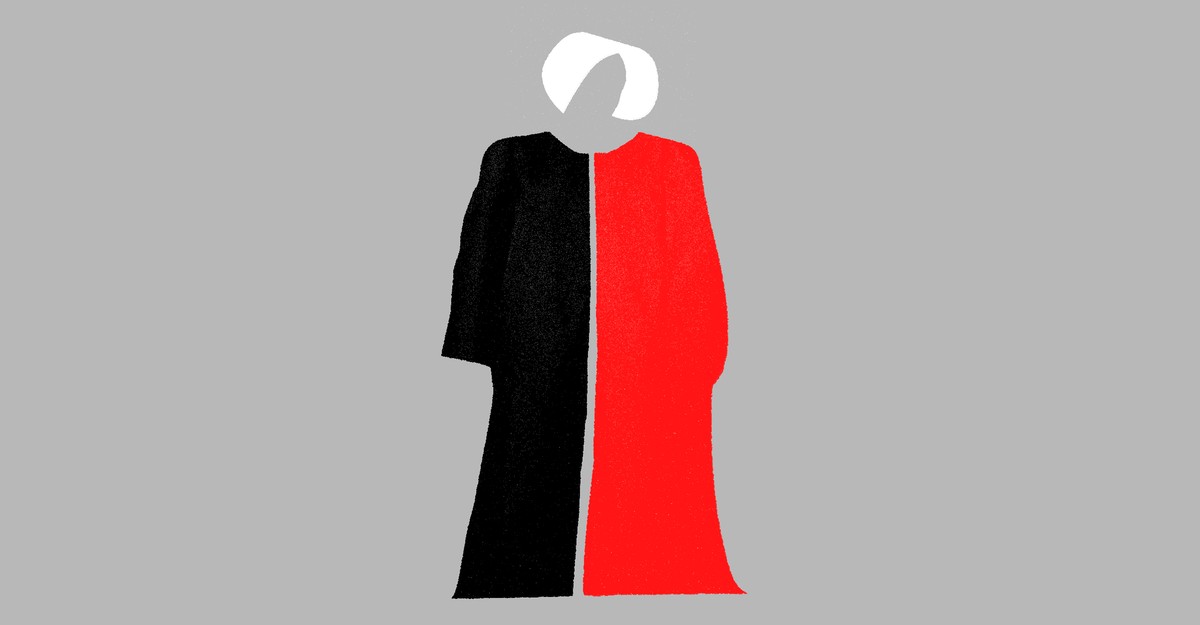 In the early years of the 1980s, I was fooling around with a novel that explored a future in which the United States had become disunited. Part of it had turned into a theocratic dictatorship based on 17th-century New England Puritan religious tenets and jurisprudence. I set this novel in and around Harvard University—an institution that in the 1980s was renowned for its liberalism, but that had begun three centuries earlier chiefly as a training college for Puritan clergy.

In the fictional theocracy of Gilead, women had very few rights, as in 17th-century New England. The Bible was cherry-picked, with the cherries being interpreted literally. Based on the reproductive arrangements in Genesis—specifically, those of the family of Jacob—the wives of high-ranking patriarchs could have female slaves, or “handmaids,” and those wives could tell their husbands to have children by the handmaids and then claim the children as theirs.

Although I eventually completed this novel and called it The Handmaid’s Tale, I stopped writing it several times, because I considered it too far-fetched. Silly me. Theocratic dictatorships do not lie only in the distant past: There are a number of them on the planet today. What is to prevent the United States from becoming one of them?

Read: Margaret Atwood on envy and friendship in old age

For instance: It is now the middle of 2022, and we have just been shown a leaked opinion of the Supreme Court of the United States that would overthrow settled law of 50 years on the grounds that abortion is not mentioned in the Constitution, and is not “deeply rooted” in our “history and tradition.” True enough. The Constitution has nothing to say about women’s reproductive health. But the original document does not mention women at all.

Women were deliberately excluded from the franchise. Although one of the slogans of the Revolutionary War of 1776 was “No taxation without representation,” and government by consent of the governed was also held to be a good thing, women were not to be represented or governed by their own consent—only by proxy, through their fathers or husbands. Women could neither consent nor withhold consent, because they could not vote. That remained the case until 1920, when the Nineteenth Amendment was ratified, an amendment that many strongly opposed as being against the original Constitution. As it was.

Women were nonpersons in U.S. law for a lot longer than they have been persons. If we start overthrowing settled law using Justice Samuel Alito’s justifications, why not repeal votes for women?

Reproductive rights have been the focus of the recent fracas, but only one side of the coin has been visible: the right to abstain from giving birth. The other side of that coin is the power of the state to prevent you from reproducing. The Supreme Court’s 1927 Buck v. Bell decision held that the state may sterilize people without their consent. Although the decision was nullified by subsequent cases, and state laws that permitted large-scale sterilization have been repealed, Buck v. Bell is still on the books. This kind of eugenicist thinking was once regarded as “progressive,” and some 70,000 sterilizations—of both males and females, but mostly of females—took place in the United States. Thus a “deeply rooted” tradition is that women’s reproductive organs do not belong to the women who possess them. They belong only to the state.

Wait, you say: It’s not about the organs; it’s about the babies. Which raises some questions. Is an acorn an oak tree? Is a hen’s egg a chicken? When does a fertilized human egg become a full human being or person? “Our” traditions—let’s say those of the ancient Greeks, the Romans, the early Christians—have vacillated on this subject. At “conception”? At “heartbeat”? At “quickening?” The hard line of today’s anti-abortion activists is at “conception,” which is now supposed to be the moment at which a cluster of cells becomes “ensouled.” But any such judgment depends on a religious belief—namely, the belief in souls. Not everyone shares such a belief. But all, it appears, now risk being subjected to laws formulated by those who do. That which is a sin within a certain set of religious beliefs is to be made a crime for all.

Let’s look at the First Amendment. It reads: “Congress shall make no law respecting an establishment of religion, or prohibiting the free exercise thereof; or abridging the freedom of speech, or of the press; or the right of the people peaceably to assemble, and to petition the Government for a redress of grievances.” The writers of the Constitution, being well aware of the murderous religious wars that had torn Europe apart ever since the rise of Protestantism, wished to avoid that particular death trap. There was to be no state religion. Nor was anyone to be prevented by the state from practicing his or her chosen religion.

Read: The challenge of Margaret Atwood

It ought to be simple: If you believe in “ensoulment” at conception, you should not get an abortion, because to do so is a sin within your religion. If you do not so believe, you should not—under the Constitution—be bound by the religious beliefs of others. But should the Alito opinion become the newly settled law, the United States looks to be well on the way to establishing a state religion. Massachusetts had an official religion in the 17th century. In adherence to it, the Puritans hanged Quakers.

The Alito opinion purports to be based on America’s Constitution. But it relies on English jurisprudence from the 17th century, a time when a belief in witchcraft caused the death of many innocent people. The Salem witchcraft trials were trials—they had judges and juries—but they accepted “spectral evidence,” in the belief that a witch could send her double, or specter, out into the world to do mischief. Thus, if you were sound asleep in bed, with many witnesses, but someone reported you supposedly doing sinister things to a cow several miles away, you were guilty of witchcraft. You had no way of proving otherwise.

Similarly, it will be very difficult to disprove a false accusation of abortion. The mere fact of a miscarriage, or a claim by a disgruntled former partner, will easily brand you a murderer. Revenge and spite charges will proliferate, as did arraignments for witchcraft 500 years ago.

If Justice Alito wants you to be governed by the laws of the 17th century, you should take a close look at that century. Is that when you want to live?