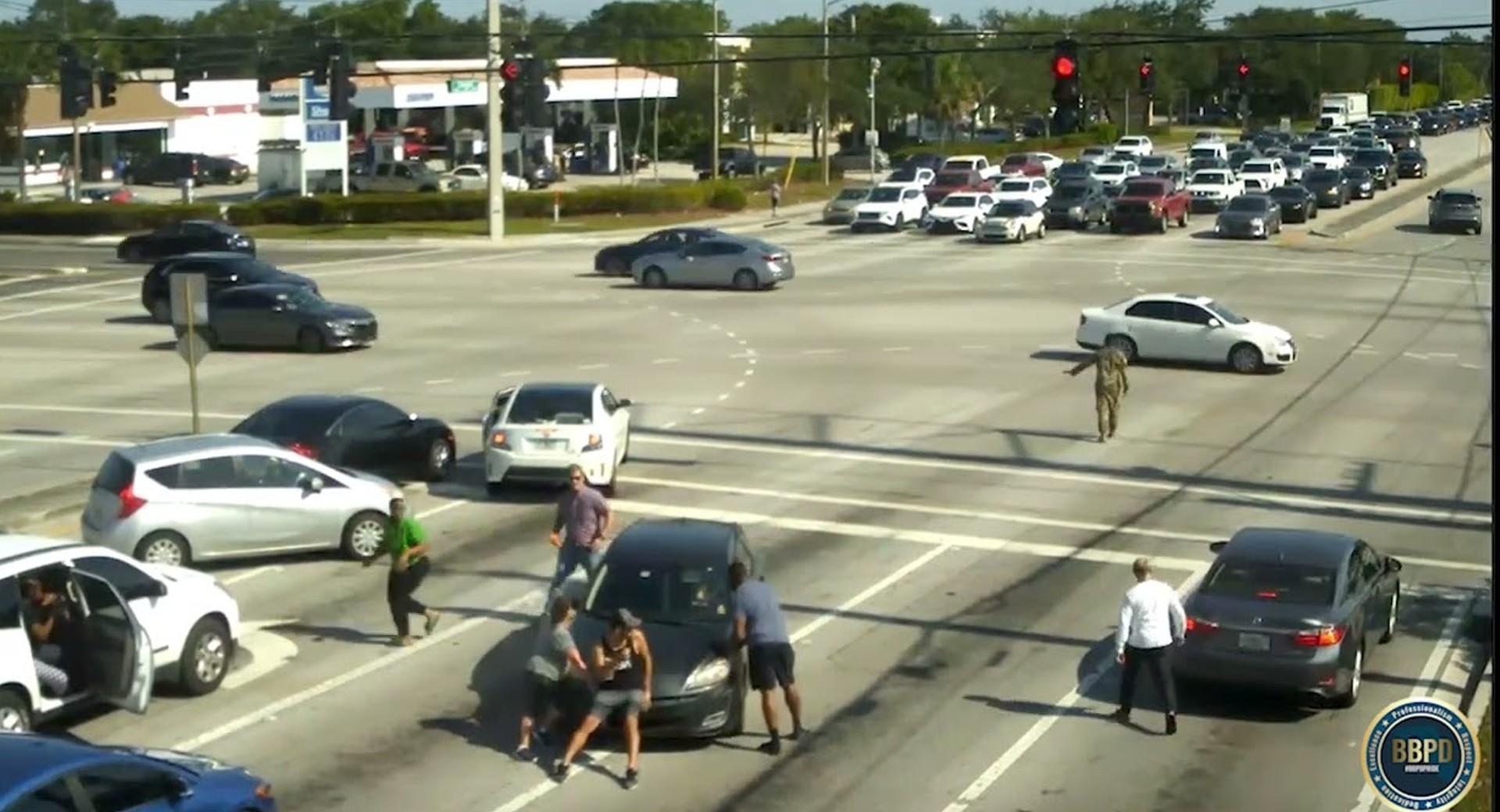 The end times must be neigh because a group of amazing Samaritans from none other than Florida just came together like the Avengers to help an incapacitated driver in the throes of a medical emergency. The ordeal was caught on a traffic camera in Boynton Beach near Boca Raton, Forida. Her co-worker, who was driving next to her, noticed the problem first but what happened from there looks like something straight out of a movie.

Laurie Rabyor was the woman at the center of the incident and she recently spoke to local news station CBS12 about how a combination of medication and other factors led her to feel dizzy behind the wheel. Before she could safely pull over and call for help she lost consciousness.

Around that same point in time, she says that she hit a curb though we don’t see that in the footage. Instead what we see is how her car is slowly creeping into the large intersection as cars whizz by. Her co-worker jumps out of her own car and immediately runs into the intersection waving her hands as if to draw attention to the issue and perhaps slow traffic.

More video of this act of heroism! We have been in touch with several of the Good Samaritans and will be honoring them/reuniting them with the woman they rescued tomorrow afternoon. Thank you. @WPBF25News @WPTV @CBS12 @wsvn @WPLGLocal10 @nbc6 pic.twitter.com/hQgFvl5RiN

Almost simultaneously, a person in a car on each side of the intersection opens their door and each one makes their way towards the still drifting Mazda. A third person jumps out of a nearby Lexus and then two more folks come out of nowhere to assist in stopping the car.

One of them is a lady who ultimately returns to her vehicle to grab a dumbbell which she lends to a man who uses it to smash in the rear passenger window of the car. A different gentleman then crawls into the broken window to unlock the car so others can begin assisting Rabyor.

Thankfully, EMTs were able to attend to her and she credits the group with saving her life. What’s wild is that she still doesn’t know many of the individuals involved in the rescue. The local police department has already begun the effort to identify everyone involved and is trying to coordinate a time for everyone to meet Ms. Rabyor.

It’s a warm and wonderful story that reminds us all that good things are happening all over the place. This is just one of the few times when it was unexpectedly caught on film. It’s also a good reminder to keep an eye out for your fellow drivers.