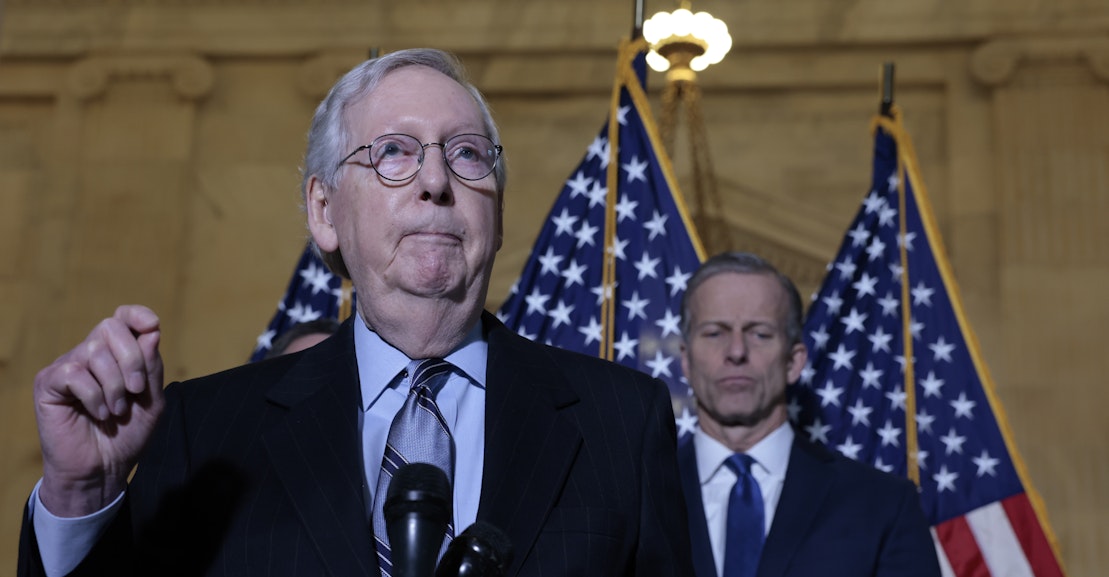 If Putin invades Ukraine, as it appears he will, the United States should impose severe non-military sanctions, and damn the cost, because such aggression mustn’t go unpunished. McConnell and most Republican politicians would agree (though some are apparently hearing the siren call of Tucker Carlson, who is anti-Ukraine and pro-invasion in support of the creepy cult of international nationalism that Kathryn Joyce wrote about earlier this month in TNR). “Ukraine is a democracy,” Rep. Michael R. Turner, the highest-ranking Republican on the Intelligence Committee, explained to Carlson in November. “Russia is an authoritarian regime that is seeking to impose its will upon a validly elected democracy in Ukraine, and we’re on the side of democracy.” Damn right!

But Turner wasn’t willing, back in November, to say damn the torpedoes, full speed ahead when the House took up the Build Back Better bill. He voted nay. “One of my biggest concerns about our economy is inflation,” Turner said earlier this month, “and I’ll certainly be working to oppose non-defense spending that could have inflationary impacts and then of course, you know, that comes right out of the pockets of every family member as they see increased prices at the grocery store, at the store, and at the gas pump.” Never mind the inflationary impact of defense spending, which accounts for 11 percent of all federal spending, or of nonmilitary sanctions against Russia. Those don’t count!

If you favor penalizing Russia for a Ukraine invasion, then you’re willing to live with higher inflation.

I don’t wish to give aid and comfort to the Carlsonite brownshirts. But if you favor penalizing Russia for a Ukraine invasion, then you’re willing to live with higher inflation. You just are. It’s no use pretending that the defense of freedom comes free. Twenty years ago, Lawrence Lindsey, chairman of President George W. Bush’s National Economic Council, blurted out to Bob Davis of The Wall Street Journal that the Iraq war might cost $100-$200 billion. Because the official line was that the war would cost $50-$60 billion, Lindsey was shown the door. But Lindsey really should have gotten fired for low-balling. The real cost ended up being more than $3 trillion (not to mention the death of more than 4,400 soldiers), according to a rigorous calculation by Nobel laureate Joseph Stiglitz and Linda Bilmes of Harvard’s Kennedy School. Lindsey’s forecast was off by $2.8 trillion.

Punishing Russia for invading Ukraine won’t be as costly as deposing Saddam Hussein. The price this time will involve no blood and a lot less treasure. But sanctions will impose an inflation tax much higher than anything threatened by the Build Back Better bill. That’s a tax I’m willing to pay, but one that saber-rattling Republicans like McConnell and Turner won’t acknowledge, to assist a nation that lies 5,000 miles away. Let’s help the Ukrainians as best we can. But let’s help ourselves, too.