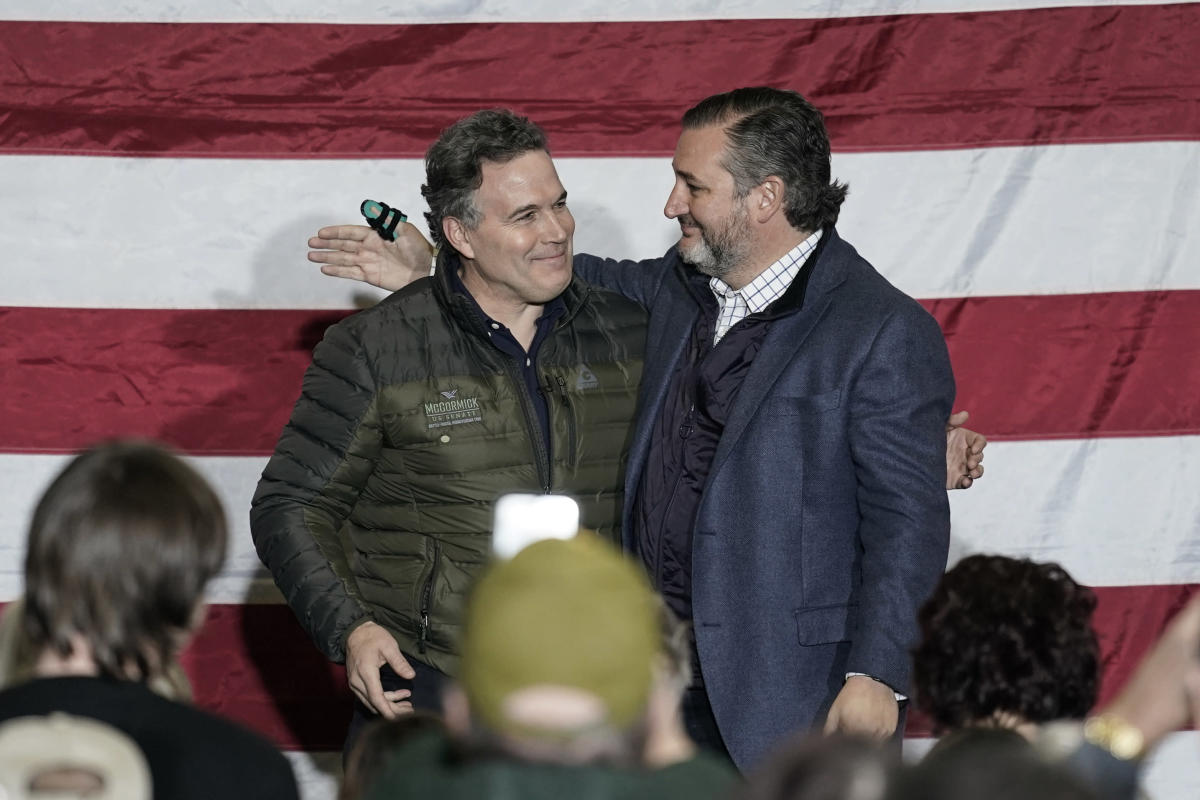 Sen. Ted Cruz of Texas, who endorsed McCormick last week, headlined a rally for the candidate on Tuesday at a skeet shooting facility near Allentown that doubled as McCormick’s first public campaign appearance.

It was a preview of McCormick’s campaign strategy of enlisting an all-star roster of party stalwarts and Trump White House insiders, including adviser Hope Hicks and press secretary Sarah Sanders, who is now running for Arkansas governor.

The contest in Pennsylvania for the seat being vacated by retiring Republican Sen. Pat Toomey is expected to be among a handful of competitive races this year that will determine control of the Senate, a sentiment echoed by Cruz as he stumped for McCormick and pointed to the Senate’s Democratic leader, New York’s Chuck Schumer.

“Pennsylvania could very well decide this entire election,” Cruz said. “The Senate is in the balance. I believe if we win in Pennsylvania, we will defeat Chuck Schumer. And if we lose in Pennsylvania, I think in all likelihood, Schumer remains the majority leader.”

In recent weeks, the Republican primary field for Pennsylvania’s Senate seat has reset after the Trump-endorsed candidate, Sean Parnell, pulled out of the race amid an ugly custody battle with his estranged wife.

The national party is officially neutral, and party officials don’t expect Trump to make another endorsement in the race any time soon.

The candidates are working to win favor with state committee members ahead of an endorsement vote on Feb. 5 and so, for now, the surrogates will have to do.

McCormick is able to draw high-level support through his experience in Washington as a top official in President George W. Bush’s administration and through the influence of his wife, Dina Powell, a former deputy national security adviser in the Trump administration. He is also well known in high finance as the former CEO of Bridgewater Associates, one of the world’s largest hedge funds.

Before going over McCormick’s long resume as a Gulf War combat veteran and senior government official, Cruz told the crowd, “Let me tell you something about this guy: He’s a badass.”

One, he just got into the race barely two weeks ago. Two, he just moved back to Pittsburgh after living in Washington and Connecticut since 2005, raising cries of carpetbaggery from rivals.

Three, he is relatively unknown to voters, especially considering that his primary rivals include Jeff Bartos, the GOP’s endorsed candidate for lieutenant governor in 2018, and Mehmet Oz, the heart surgeon, wellness author and TV personality who carries unrivaled name recognition as the host of daytime TV’s “Dr. Oz Show.”

It remains to be seen whether McCormick’s strategy will help.

“If he has out-of-staters coming to speak on his behalf, that reinforces one of his problems, and that is that he’s just recently back here from out of state,” said Jeffrey Piccola, the Republican Party chair in York County and a Bartos supporter.

In addition to the rally with Cruz, Sanders is expected in Pennsylvania in the coming days.

For Dave Ball, the chair of the Washington County Republican Party, McCormick checks the boxes he looks for in a candidate: someone with the money to run a campaign, charisma, shared values and the ability to win a general election.

But Ball doesn’t care about endorsements. He doesn’t think they mean anything to voters or, for that matter, the state committee members who will vote on whether to endorse a candidate in the May 17 primary election.

“With the endorsements that they have right now,” Ball said, “who’s going to be impressed with these?”