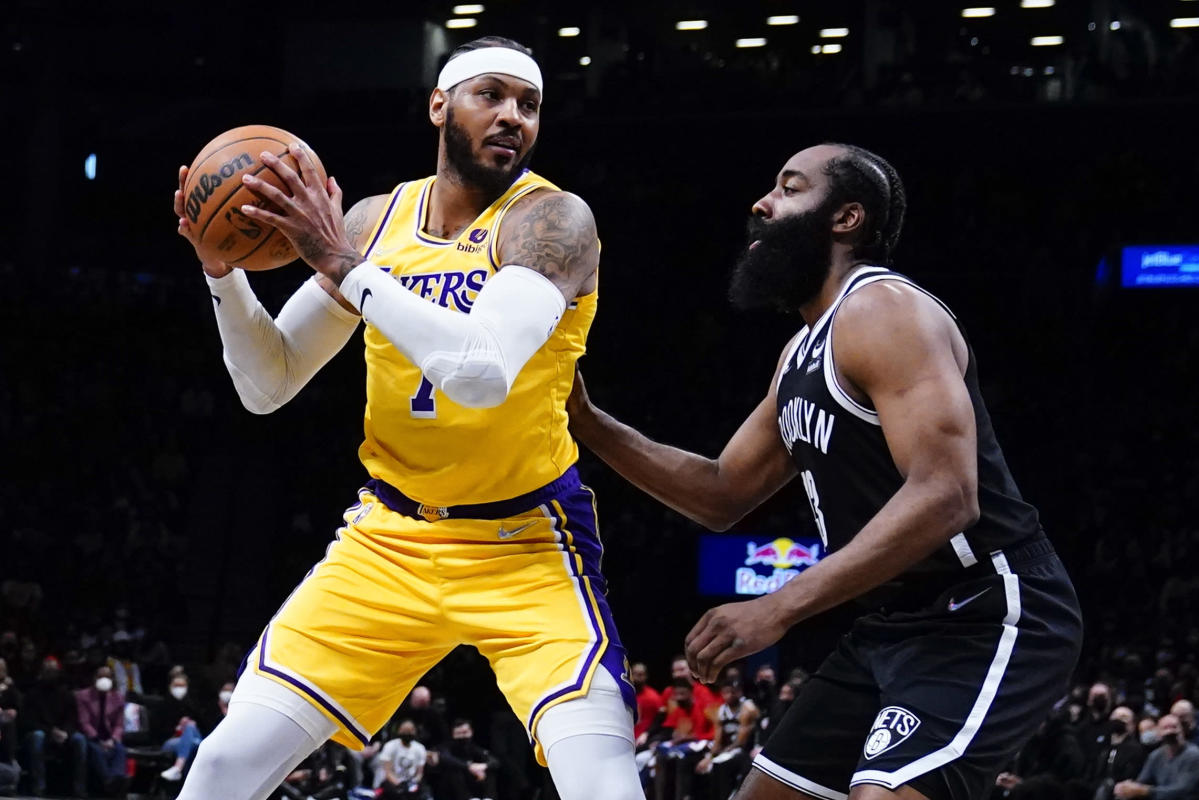 NEW YORK (AP) LeBron James welcomed Anthony Davis back with a lob pass for the game’s first basket, then turned to his own offense to score 33 points in the Los Angeles Lakers‘ 106-96 victory over the Brooklyn Nets on Tuesday night.

Davis had eight points in 25 minutes after missing 17 games with a sprained left knee and the Lakers got good nights off the bench from Malik Monk and Carmelo Anthony.

James added seven rebounds and six assists, punctuating his performance with steals and dunks about 15 seconds apart midway through the fourth quarter in front of a roaring road crowd that didn’t have most of its own stars to cheer.

James Harden had 33 points, 12 rebounds and 11 assists in an impressive follow-up to his strong game in Los Angeles when the Nets won there on Christmas. But with Kevin Durant still out with a sprained left knee ligament and the unvaccinated Kyrie Irving unavailable again now that the Nets are back from their four-game road trip, the Nets couldn’t match the Lakers on one of their good nights in an uneven season.

Davis looked in sync right away, throwing down a lob pass from James on the first possession of the game. He also blocked three shots in the first quarter, which ended with the Lakers leading 33-25 on James’ basket as time expired.

James opened the second quarter with a three-point play to push the lead to 11, and the Lakers would lead by as much as 14 before taking a 62-53 lead to halftime.

The Nets got within two midway through the third, but James made two straight jumpers, Monk hit a 3-pointer and James fired a pass to a cutting Russell Westbrook that led to a three-point play that capped a quick 10-2 spurt and restored the double-digit lead at 81-71. It wasn’t close again.

Lakers: Westbrook scored 15 points. … Monk had 16 points in the first half.

Nets: Harden became the 32nd player to reach 23,000 points. The four active ones were all on the rosters of these teams: James, Anthony and Durant are ahead of him. … Center Nic Claxton returned after missing seven games with left hamstring tightness. He had six points and seven rebounds in 17 minutes.

Coach Frank Vogel said the Lakers expected Davis to have stretches where he was out of sync or rhythm, because he would be playing his way into shape in games without enough opportunities to do it during full 5-on-5 workout situations.

”With limited practice time, we are still viewing these first few games as not out of the woods yet,” Vogel said. ”This is going to be his reconditioning phase.”

Coach Steve Nash said he hadn’t spoken to Harden about any of Harden’s concerns that were reported in a Bleacher Report story Tuesday looking at his free agency after the season. The story said Harden was frustrated with Irving’s part-time status and by Nash’s playing rotations. Nash said they didn’t seem like things Harden would say.

”So I’m not sure what to believe,” Nash said. ”James and I speak all the time and I think we have a great relationship, so I’m not sure the validity of these comments to be honest with you.”