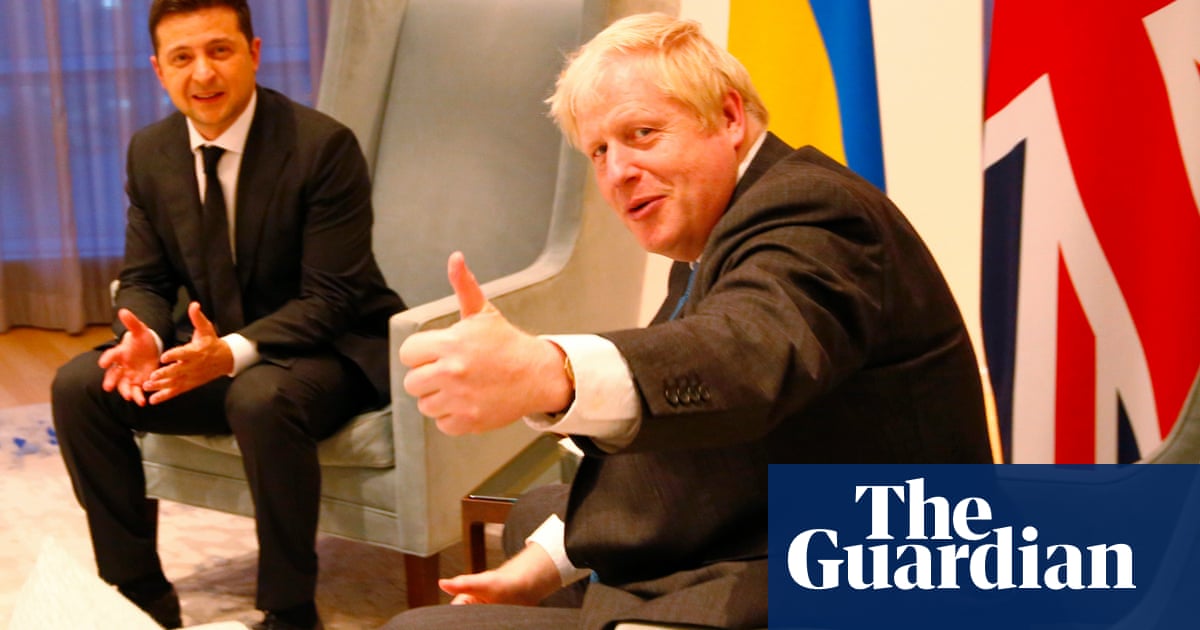 The unusual Foreign Office revelation on Saturday night that British intelligence had unmasked a plot to install a Russian puppet government in Ukraine was issued alongside a lengthy release from Downing Street in effect claiming Boris Johnson was now at the helm of an anti-Russian alliance.

The release said a deeply engaged Johnson was being briefed daily on the crisis, had ramped up the Whitehall response and was willing to engage directly with Vladimir Putin. It also touted his close personal friendship with the Ukrainian president, Volodymyr Zelenskiy, and the number of calls he had made to world leaders in recent days.

The release, promising ministers would be fanning out across Europe and a gear change across Whitehall, sought to give the impression of an animated leader gripping a crisis, some distance from the impression of a broken man unable to shed the travails of Downing Street parties in lockdown.

It was confirmed that the defence secretary, Ben Wallace, at Johnson’s instruction, would be travelling to Moscow, and Liz Truss, the foreign secretary, may go to Kyiv and Moscow, following in the footsteps of the new German foreign minister, Annalena Baerbock.

Yet the Downing Street release was unusual not just for giving the impression of frenetic activity. For alongside its call for maximum Nato unity and its insistence that the UK was operating in lockstep with the US, Johnson delivered some pointed barbs against the French and the Germans.

The No 10 statement was in diplomatic terms most remarkable for making no attempt to disguise his frustration with his European Nato allies. In a clear reference to remarks made by the French president, Emmanuel Macron, the statement said: “The prime minister has been clear to counterparts in recent days that now is not the time in the face of spiralling aggression on the border to start a conversation about Europe’s strategic autonomy or radical changes to the European security architecture.”

Macron has recently once again raised the idea of a stronger European defence pillar. No 10 said it would be “frankly naive to assume that Russia could be mollified by changes to the European security architecture – the Kremlin’s behaviour has made that consistently clear”.

Sources close to Johnson were described as saying he feared that “some world leaders may not appreciate the deteriorating picture on the Ukrainian border, or fully comprehend the risks posed by a bullying Russia.”

No 10 did not name these naive countries but it did take aim at the German coalition government, pointing out that Johnson in a Mansion House speech in November had broken with the previous approach of polite but muted opposition to the Nord Stream 2 gas pipeline from Russia to Germany, saying it was “a major strategic problem for European security”.

Johnson will also have raised eyebrows in European capitals with his announcement that he was setting up calls with G7 leaders to form a sanctions coalition that would hit “Putin-supporting oligarchs”.

His announcement came on the day Transparency International released figures showing that the amount of Russian money in London property is higher than previously thought – £1.5bn, as opposed to the previous estimate of £1bn. Efforts are still under way, led by the Liberal Democrat Layla Moran, to set up a public property register in London, but so far the government has dragged its feet on it.

Transparency International UK said it had “identified almost 150 land titles ultimately owned by Russian individuals alleged to be involved in corruption or with links to Putin’s regime”. It said: “Of the £1.5bn identified, more than £1bn of this is held by companies based in secrecy havens, the majority of these companies are based in UK crown dependencies and overseas territories like the British Virgin Islands and the Isle of Man. The ownership of these firms has only been revealed due to court cases, document leaks and investigations by journalists.”

Few can predict the course of the Ukraine crisis, and no one doubts the huge military and ideological support provided by the UK, but at minimum Johnson has a lot of catching up to do before he is taken seriously as the central player in this conflict in the way that Downing Street projects.