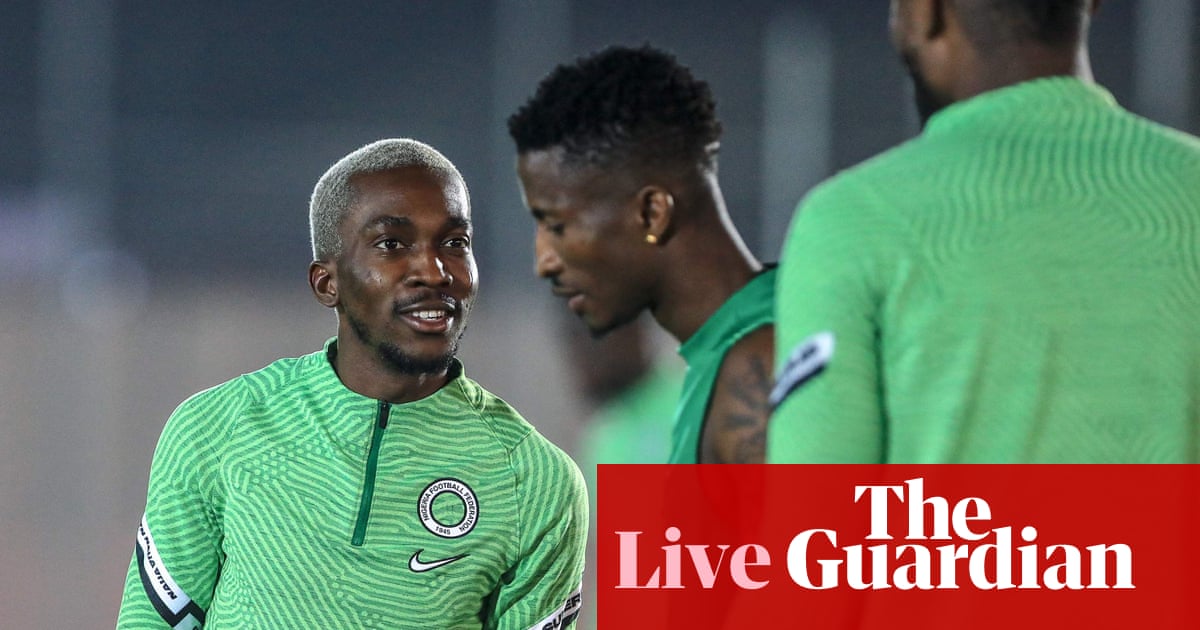 4 min: Tunisia are yet to launch an attack, or even spend any time in the Nigeria half. It’s going to be a long night for their back four at this rate.

1 min: Nigeria win an early corner. Wilfred Ndidi nearly gets on the end of it with a header. But Tunisia repel the danger.

Nigeria v Tunisia is go. The Super Eagles v the Eagles of Carthage.

After a draining penalty shoot-out, Burkina Faso finally get the job done! And they are the first team to go into the last eight at the Africa Cup of Nations thanks to the winning spot-kick by Ismahila Ouédraogo.

Abdoul Tapsoba just had a sudden-death penalty to send Burkina Faso through … and it was saved by Amonome!

Burkina Faso and Gabon’s penalty shootout has gone into sudden death, after the two teams scored four out of five penalties each.

Comoros will be forced to start an outfield player in net for their Africa Cup of Nations round of 16 clash against hosts Cameroon on Monday, as their three goalkeepers are all absent.

‘He can play as a keeper’: Comoros to use outfield player in net in Afcon last-16 tie

Excitingly, Burkina Faso and Gabon are currently locked at 1-1 in extra-time in their last-16 encounter. Gabon had Sidney Obissa sent off on 67 minutes, and were already trailing by a goal to nil, but an injury-time own goal by Adama Guira took into beyond 90 minutes.

“The middle continues to rise. In Europe at least, the question about African football is why it has not kicked on the past two decades from the time when, in the space of 12 years between 1990 and 2002, Cameroon and Senegal reached World Cup quarter-finals and Cameroon and Nigeria won Olympic golds. One quarter-final since does not look much like progress.”

Nigeria’s form in winning Africa Cup of Nations Group D was exemplary: played three, won three, five goals scored, one conceded. Tunisia’s Covid-19 hit squad, on the other hand, began the tournament with a controversial 1-0 loss against Mali. They were also on the wrong end of a 1-0 scoreline in their third and final Group F game against Gambia. But a 4-0 thrashing of Mauritania, between those two defeats, proved to be enough for progress into the last 16.

Will it be the Super Eagles, or the Eagles of Carthage, that soar into the last eight? The smart money surely has to be on Nigeria taking flight, but this is knockout football, and Tunisia are certainly no mugs. We’ll see when the teams are revealed to what extent Tunisia have recovered from the Covid cases that ravaged their squad. Team news and more coming up.