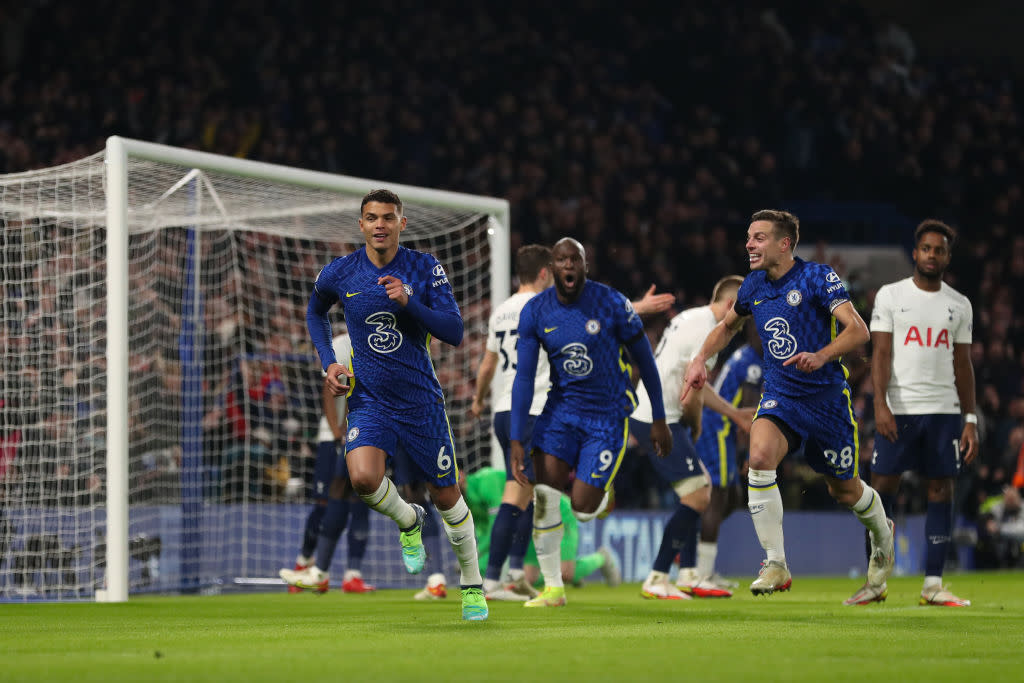 Chelsea looks to win a fifth-straight match against London rivals Tottenham for the first time since 2002 when it hosts Spurs on Sunday at Stamford Bridge (watch live, 11:30am ET Sunday online via Peacock Premium).

The Blues won a pair of League Cup matches versus Tottenham earlier this month, adding to two-straight PL wins.

Throw in a 0-0 draw in November 2020 and Chelsea has not lost or allowed a goal to Spurs in five matches. Moreover, Chelsea’s only loss to Spurs since the first month of 2019 was a 2020-21 League Cup loss in penalties.

Here’s everything you need to know ahead of Chelsea vs Tottenham.

Tottenham have sent on Moura and Skipp. Kane’s cross is hooked goalwards by Bergwijn, but Kepa saves.

GOALLL! 2-0 to Chelsea. A free kick is whipped in by Mason Mount and Thiago Silva heads home. Blues cruising.

GOALLLL! Hakim Ziyech with an absolutely stunning goal to put Chelsea 1-0 up. What a goal! Incredible dip and bend on that. Wow. Moments later he has a drilled effort pushed wide by Hugo Lloris. Chelsea superb at the start of the second half.

Start of the second half delayed as the net had a small hole in it at one end. Did Kane’s shot in the first half break it!? What a weird weekend we’ve had in the PL for things you never thought you’d see..

HALF TIME: Tottenham will be much happier with that than Chelsea. Spurs look dangerous on the counter. Chelsea sluggish going forward. Conte’s side keeping it tight.

NO GOAL! Harry Kane scores. But the goal is ruled out for a foul on Thiago Silva. Kane pushed his arm out on Silva, but that is very soft. Lovely finish from Kane after a great burst forward from Bergwijn. Goal ruled out. Silva used his experience there. A let-off for Chelsea.

It is very even. Kane is getting on the ball more but is dropping very deep. Chelsea look tired, just like Tuchel has been saying.

VAR check for a possible red card as Doherty catches Sarr with a nasty one on his ankle. No red card. Probably the right call. Tanganga then hits his head on the advertising board after he was given a little nudge by Mount. Getting spicy.

Harry Kane working back down the right flank and wins it back and feeds Harry Winks. His low shot is saved easily by Kepa. Better from Spurs.

Chelsea have started better but Tottenham have settled things down. A few crosses into the box from the hosts, but that is about it. Very tight and tense.

Matt Doherty playing as a right winger for Tottenham. Malang Sarr playing left back for Chelsea. Spurs in a 4-4-2 and Chelsea in a 4-1-4-1. Feels like both managers sending a message to their board about new signings…

Romelu Lukaku loops a shot well over after good work down the right. Bright start from Chelsea.

KICK OFF: We are underway in a massive London derby. This is huge for both clubs.

The atmosphere is building up nicely here.

Steven Bergiwjn, the man of the moment after his amazing late double at Leicester, is going through the shooting drills alongside Harry Kane. Both looking sharp.

When it comes to the lineups for both of these teams, it seems like both may have switched to a back four from their usual 3-5-2 formation. They have played several teams in recent weeks, so Tuchel and Conte are trying to gain an edge.

The atmosphere is building up nicely in the streets of west London ahead of this clash between bitter rivals! Welcome to Stamford Bridge. Gloomy skies and a little chilly here in England’s capital city. In my book, that is a beautiful day for what should be a beautiful game. Sunshine is overrated… Right!?

Edouard Mendy is still on duty at Africa Cup of Nations, while Reece James, Ben Chilwell, Andreas Christensen, and Trevoh Chalobah also miss out with injuries or illness. Hudson-Odoi is starting at wing-back, with Kante also on the bench.

How to watch Chelsea vs Tottenham live, stream link and start time

Kick off: 11:30am ET Sunday
Online: Stream via Peacock Premium