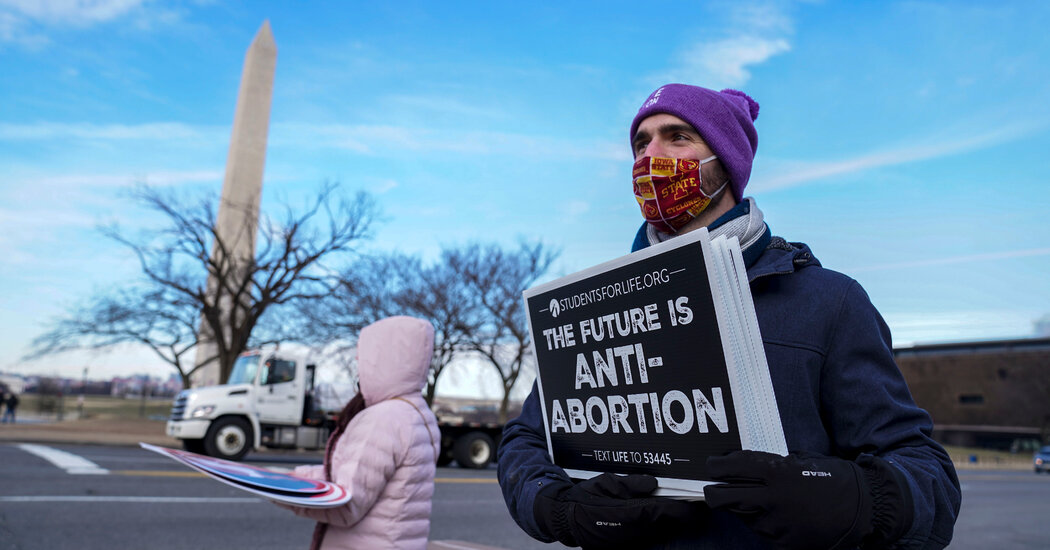 Anti-abortion protesters descended on Washington from across the country on Friday for the annual March for Life, a ritual that this year took on the tone of a celebration as they anticipated the Supreme Court overturning the decision that established a constitutional right to abortion half a century ago.

The marchers have arrived by the busload in Washington every January since 1974, the year after the Supreme Court’s decision in Roe v. Wade established a nationwide right to abortion. The tension this year was higher for both sides in the abortion debate as they await the court’s ruling on a Mississippi law that bans abortion after 15 weeks. That law directly contradicts the Roe decision, which forbade states from banning abortion before a fetus becomes viable, or roughly 22 weeks.

At oral arguments in December, the court’s six conservative justices signaled that they were inclined to uphold the Mississippi law. Several justices indicated they were willing to go further and overturn the Roe decision entirely.

“We are hoping and praying that this year, 2022, will bring a historic change for life,” said Jeanne Mancini, the president of the March for Life Defense and Education Fund, which has organized the march since 1974.

Bailey Ashe, a freshman at Liberty University in Virginia, who arrived in Washington after a four-hour bus ride with other students on Friday morning, said she was optimistic that the Supreme Court would overrule Roe in the spring. “All I can do is hope and pray it happens,” said Ms. Ashe, 18, who was holding a black-and-white sign that said, “I am the post-Roe generation.”

Groups that support abortion rights were also anticipating that the 49th anniversary of the Roe decision on Saturday could also be the last. They held events all week underscoring the ways they say the Roe decision has advanced the health and economic security of women and families, and warning of the risks if the court strikes it down.

On Thursday evening, the abortion rights group Catholics for Choice beamed messages in light on the side of the Basilica of the National Shrine of the Immaculate Conception in Northeast Washington, the largest Catholic church in North America, as anti-abortion marchers convened inside for an all-night vigil. The messages on the tower of the basilica noted that one in four women who get abortions are Catholic and that 68 percent of Catholics in a Pew poll support the Roe decision. “Pro-choice Catholics, you are not alone,” read one.

According to the Guttmacher Institute, which supports abortion rights, laws in 26 states would ban abortion immediately if the court overturns Roe, a swath that extends from Idaho and Arizona in the West to Ohio and Florida and includes 36 million women of reproductive age.

Other states have rushed to adopt laws that restrict abortion except in the earliest weeks of pregnancy — before many women realize they are pregnant.

The number of abortions in the United States has declined since Roe — with 862,000 performed in clinics in 2017, according to several studies. But those declines are largely from a decline in pregnancies. The numbers suggest that a reversal of Roe would mostly affect poor women, women of color, and those who are already mothers.

Ms. Mancini, the president of the March for Life, accused abortion rights groups of fear-mongering about the risks if Roe falls. She argued that overturning the decision would simply return the question of abortion rights to states to decide according to the wishes of their citizens.