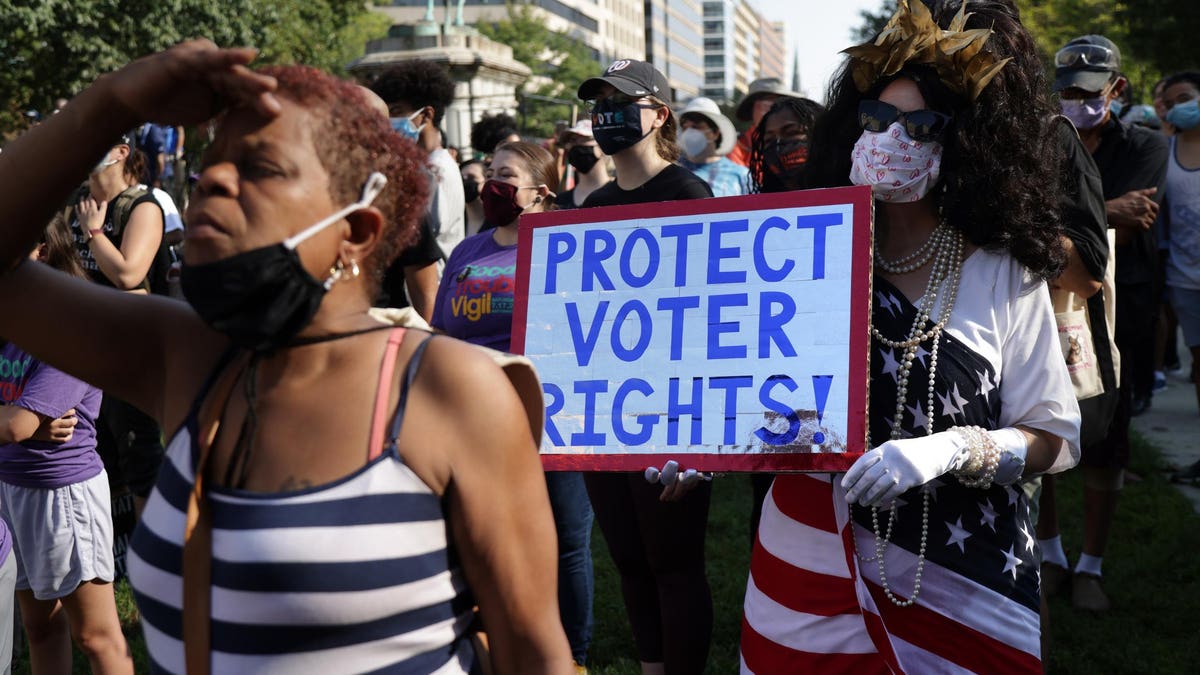 With the Democrats’ election legislation on life support and Senator Schumer promising more debate next week, it is worth reviewing what recent polls on it reveal. Several new ones shed light on why the legislation was unlikely to pay big political dividends for the president or to improve Americans’ views about voting integrity.

An online Morning Consult/Politico poll released this week asked registered voters what the top priority for Congress should be in this area. Twenty percent said reforming Congress’ role in counting Electoral College votes, 22% said expanding oversight of states’ changes to voting practices, and 26% expanding voting access in federal elections. But the top response, given by 32% of those surveyed, was “none of the above should be a priority for Congress.”

There are several possible reasons for the “none of the above” response. First, Americans are clearly focused on issues such as inflation and coronavirus. Just 6% in the latest AP/NORC poll volunteered “voting laws, voter fraud, or voting issues” as the top problem the government should be working on in 2022.

Second, most Americans have not been paying much attention to the debate on the legislation. The latest NPR/Ipsos poll explored public awareness of various voting reforms included in the legislation without mentioning the legislation by name. Fifty-three percent said they were very or somewhat familiar with the proposals to allow any eligible voter to vote by mail. This was the only issue tested that showed majority awareness. Forty-four percent were familiar with state proposals reducing access to absentee ballots, limiting early voting times, or reducing the number of voting locations. Forty-one percent were familiar with proposals standardizing voting rules across states, 39% with state legislatures changing election laws to give them the power to determine election outcomes, 36% with state legislatures limiting the independence of elected election officials, and separately, with proposals moving redistricting authority to nonpartisan commissions. Finally, 32% were familiar with proposals to give the vice president the right to decide which electoral votes should be counted. Democrats were more familiar than Republicans with each of these, but the low levels of overall familiarity don’t suggest a groundswell of public interest.

In the Morning Consult/Politico poll, a substantial 28% of registered voters responded “don’t know” or “no opinion” when asked whether they supported the Senate’s filibuster rule, and 27% gave that response in another question about changing the filibuster rules to pass voting rights legislation. In the first of these questions, 42% supported the filibuster rule (30% were opposed), and in the second one, people were split evenly, 37% to 36%, about changing it now. I’m less confident about the support and oppose scores than I am about limited public awareness of complexities of the issue.

There is the third reason most Americans may not see the urgency or necessity of passing legislation that would give Washington more control in this area. Neither the NPR poll nor the Morning Consult poll asked Americans about their personal experience with voting, although NPR has asked these questions before in its polling with PBS NewsHour and ­­­­Marist. As Samantha Goldstein and I showed in a report for the Democracy Fund Voter Study Group, very few Americans have faced impediments to voting such as being told they didn’t have the correct identification, that they weren’t on the registration list. Very few say they did not receive their mail-in ballot in time. Most Americans say it very easy to vote, and in the Pew Research Center’s trend, most say they are confident their own vote was counted accurately.

Americans are generally reform-minded. In the Morning Consult/Politico poll, 65% supported expanding access to early voting, 64% prohibiting partisan gerrymandering, 63% requiring states with a history of past voting rights violations to get permission from the Department of Justice or US District Court before making changes, 62% making it illegal to prevent someone from registering to vote, 61% making Election Day a holiday, and 55% expanding access to voting by mail. But these issues don’t have much intensity in the current climate.

Americans have made clear in many polls and in the actual way they vote that they support expanding convenience voting with safeguards. In the Morning Consult poll, people were more enthusiastic about expanding access to early voting than they were about expanding automatic voter registration or same-day registration — areas where some sense the potential for fraud.

These polls don’t tell us whether Americans want to significantly increase federal involvement in voting. In the new Quinnipiac University poll released Thursday, two-thirds said they were confident that their state would protect their right to vote. Just 16% were not confident at all.