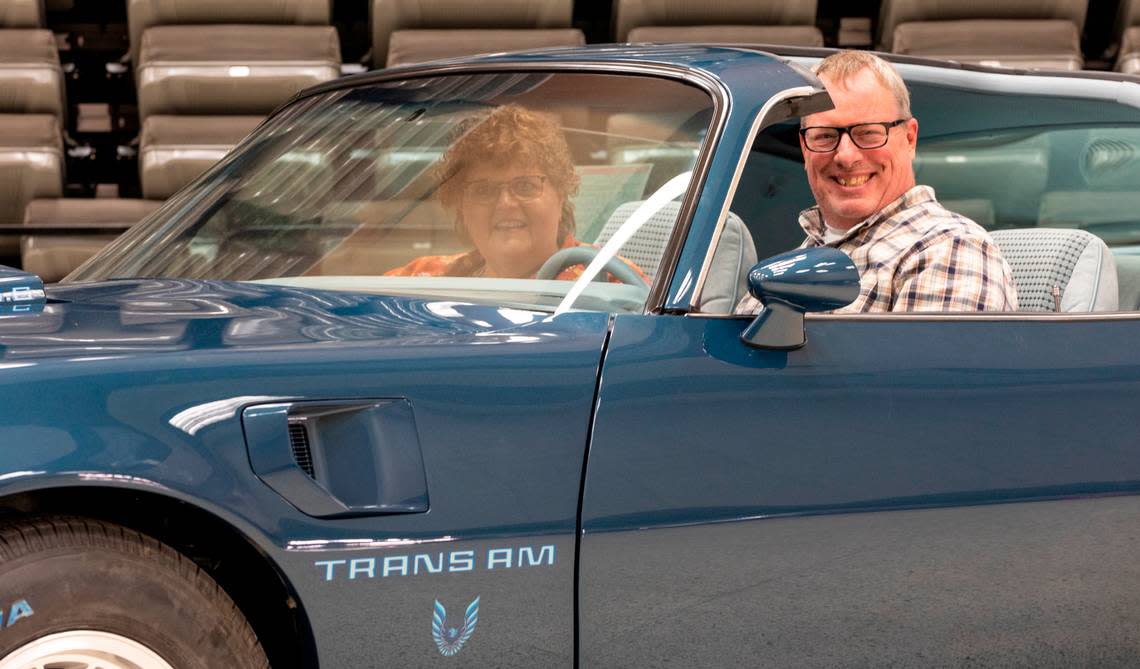 There’s a car that’s in this weekend’s 2022 Cars for Charities Rod & Custom Car Show at Century II that would not have made it without a lot of persistence — along with help from a TV show.

It’s actually the story of three wives, two husbands and one very popular Trans Am.

“I bought this car when I was a junior in high school, which would have been 1982,” said Wichitan Brent Lehner.

He had picked out another car, a 1969 convertible Corvette, “that my dad told me I couldn’t buy.”

His father explained that Lehner didn’t need the car, and then Lehner explained “that need had nothing to do with it.”

Instead, Lehner found a dark blue 1979 Pontiac Trans Am, complete with T-tops. The original owner was selling it with 34,000 miles on it.

“This was a hot car for a high school kid,” Lehner said.

His father still didn’t approve, especially when his son explained how he was going to pay for it.

John Lehner was a cattle farmer, and he’d gotten his son into the business. The younger Lehner had some luck. His father congratulated him and advised he put the money he earned into more cattle.

His son instead opted for a $6,750 Pontiac Trans Am and did not follow him into the cattle business.

“That car was me,” Lehner said. “When you saw a blue Trans Am in McPherson County or surrounding counties, you knew it was me.”

He couldn’t sneak back from school in Manhattan to see a girlfriend without his family hearing about a Trans Am sighting.

Lehner said he took good care of the car.

His father warned him,” I swear to God, you’re going to kill yourself in that car.”

That’s how Lehner figured out his father had taken the car for a spin and saw its horsepower.

“He was an old hot-rodder back in the day,” Lehner said.

The car, which Lehner never named, got him through high school and college, but then came his first job, a wife and a baby, and the car sat unused.

One day, his wife gave him an ultimatum: He had till the end of the week to sell the car or she would.

Lehner said he wasn’t disappointed only for himself.

“I’d always said, ‘My daughter is going to drive this car to her high school prom.’ ”

Mostly, though, he was sad for himself.

“I mean, this car was really an important piece of me.”

When he sold it — really, practically gave it away, he said — he told the new owner that he had another set of keys that he forgot to bring and would mail them, but he never did. Instead, the keys sat in his jewelry box as a constant reminder of what he’d lost.

About seven years or so ago, Lehner decided to try to track down the car. He called county after county searching for the VIN number. He kept being told he’d have to call Topeka, but Lehner said he couldn’t see anyone at the state level helping him. A Scott County employee told him he was right, he probably wouldn’t get far, “But they might talk to me,” she said.

Fifteen minutes later, she called with the number.

Then, a friend in law enforcement ran the number through a database, “which is against every known policy in every local law enforcement,” Lehner said.

He was given a name with a Coffeyville address, but he couldn’t find a phone number. Lehner said he didn’t feel comfortable simply showing up.

Instead, he contacted a TV show called “Lost and Found With Mike and Jesse” for help locating it.

Lehner’s daughter, Katy, became involved, and the show took the angle that she was trying to surprise her father with the car. Lehner took a back seat, so to speak, in the deal.

Except there almost wasn’t a deal. The Coffeyville car owner didn’t want to sell, nor was he pleased to hear representatives from the show talk about “Brent’s Trans Am.”

“It was Brent’s Trans Am,” Lehner recalled the man saying. “It’s my Trans Am now.”

After much prodding from the show along with a deal the Coffeyville resident’s wife made him — sell the Trans Am and take the money to finish your other project car — the man agreed to sell it for $12,000.

Lehner’s new wife, Jane Deterding, was doing the negotiating, and she refused to pay more than $7,000.

Deterding is chairman of Citizens Bank of Kansas, and Lehner said she is known for driving a hard bargain. It worked to her benefit. She paid $7,000, and the show kicked in the other $5,000.

Lehner said the show probably is the only way he could have gotten the car from the Coffeyville resident.

“I don’t think I could have closed the deal. I think he would have just thrown me off the property.”

The interior of the car was not in good condition, but Lehner said he’s had just about everything on the car fixed.

“Every single nut and bolt on that car has been taken apart and put back together.”

The other day, Deterding asked how much he’s spent restoring the vehicle.

Terry Reames of Wichita’s Eye Candy Garage and Tom Wilhite at Wilhite Performance in Derby have done most of the work.

“I’m not sure Terry got any sleep last night,” Lehner said of getting ready for the car show, which runs Friday through Sunday.

And driving it again “was pretty amazing.”