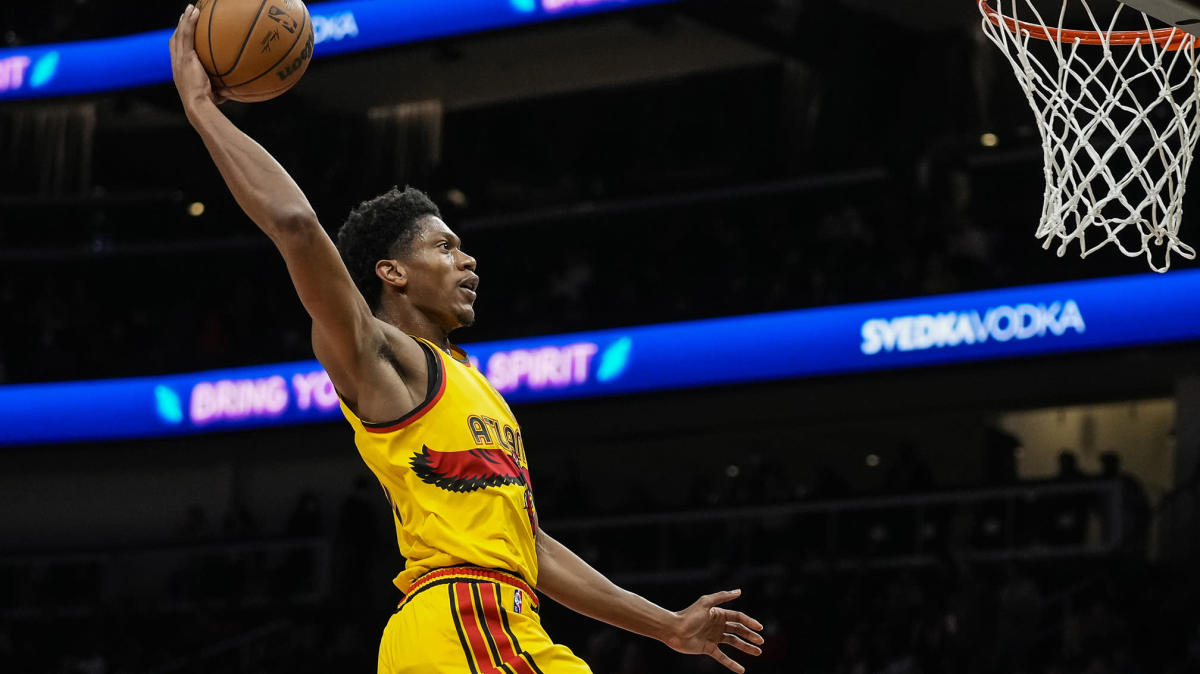 *To qualify for this list, players have to be available in over 60% of Yahoo Leagues.

For NBA News and fantasy advice, find me on Twitter here!

De’Andre Hunter (36%)- Hunter has had some awful luck in the injury department for the past couple seasons but he looked to be in mid-season form in his return. He had 15 points (4-of-11 FGs), one rebound, one steal, one block and three triples in 24 minutes, and all signs point to the Hawks moving on from John Collins. Hunter’s future is as a small-ball four, and that should be great for his rebounding and defensive numbers. Hunter was a top-100 player in 23 appearances last season with 15.5 points, 4.8 rebounds, 1.9 dimes, 0.8 steals, 0.5 blocks and 1.3 triples.

Max Strus (26%)- Jimmy Butler’s ankles are made of Doritos and Strus recently leapfrogged Duncan Robinson for a starting job. Whether he sticks in the first unit or not, Strus has officially earned the trust of the coaching staff and should remain a key rotation player for the foreseeable future. Over the last month, Strus is second on the Heat in fantasy value with top-70 numbers of 19.1 points, 4.6 rebounds, 1.9 dimes and 4.4 triples.

The App is Back! Don’t forget to download the NBC Sports EDGE app to receive real-time player news, mobile alerts and track your favorite players. Plus, now you can check out articles and player cards. Get it here!

Amir Coffey (30%)- Who needs Kawhi Leonard and Paul George when you’ve got Coffey? He’s been on our watch list in recent weeks but graduates to must-roster status as one of the key contributors on this squad. In the seven games prior to Jan. 13th, he ranked as a 7th-rounder in 9-cat with 13.1 points, 4.3 rebounds, 3.1 dimes, 0.9 steals and 2.3 triples on 53% from the field and 87% from the line. He’s been so good that Ty Lue said he’s open to the idea of Coffey remaining with the starters if/when Paul George comes back. “He’s a guy on the court who is never going to hurt you,” Lue said. The Clippers will be getting Luke Kennard back soon, but I’m guessing that it won’t impact Coffey too much with the way he’s played.

Kentavious Caldwell-Pope (38%)- KCP doesn’t get enough love in the fantasy world. While his recent numbers are a bit inflated with so many guys in the protocols (including Bradley Beal), he was worth rostering before that too. Over his last eight games, KCP has been putting up 10th round numbers of 14.0 points, 4.5 rebounds, 2.3 dimes, 0.8 steals, 0.8 blocks and 2.8 triples. The offense will slow down a bit, but the steals should pick back up to offset that.

Lance Stephenson (37%)- Malcolm Brogdon’s Achilles is being held together by scotch tape and can’t seem to stay upright. Stephenson’s upside won’t be through the roof because the Pacers have most of their key players up and running again, but I do expect him to remain a pivotal part of the rotation as one of the few players who looks interested in competing. And with Indiana expected to be sellers at the deadline, there’s a lot of things that could fall right for Stephenson. I predict a lot of galloping and showboating in his future.

Kevin Huerter (37%)- The Hawks unloaded Cam Reddish to New York, and even though De’Andre Hunter is back in the rotation to take away any gains Huerter’s fantasy value was about to get, it doesn’t sound like Atlanta is done making moves. John Collins could be the next domino to fall, so Huerter may be able to shed his boring label in the fantasy industry soon. Over his last five games, Huerter is averaging 15.4 points, 3.6 rebounds, 3.0 dimes, 1.0 steals and 1.6 triples.

Cam Reddish (28%)- The Knicks rescued Cam from a team that clearly had no interest in giving him the role he wanted. He’ll get that chance in New York and will reunite with Duke teammate RJ Barrett on the wings. Reddish will have to leapfrog Evan Fournier to really flourish, but how hard can that be? A sixth man role should be his floor, but selfishly I want him to earn a starting job so we can see those famous Tom Thibodeau workloads. I’m adding where I can and will re-evaluate after a couple weeks.

UPDATE: Cam is expected to miss time with his ankle injury, reducing him to just a stash if you have the luxury.

Devin Vassell (24%)- I’m pretty confident he’s been the most mentioned player in this column this season, but we’ve all been waiting patiently for the second half of the campaign. Vassell’s role will steadily climb the rest of the way, and his blend of 3-point shooting and defense gives him a top-100 floor if he’s close to 30 minutes. For the season, he has a per-36 line of 2.4 triples, 1.4 steals and 1.0 blocks.

Nassir Little (18%)- Nassir’s shot has eluded him lately, as he’s hitting 37% from the field and 67% from the line over his last six games. Despite that, he’s still managed to average 13.3 points, 5.5 rebounds, 1.8 dimes, 2.7 triples and 0.8 blocks in 33.5 minutes. You’d think the Blazers would be sellers at the trade deadline to open even more usage up for Little among others, but I’m even content with him in his current role. When the defensive stats pick back up and his rhythm on offense returns, I think there is legitimate top-75 upside here.

Onyeka Okongwu (14%)- He has slowed down a bit, but so has the entire Atlanta roster. Clint Capela continues to miss time with an ankle sprain, but when he returns I still think there’s a path to 20 minutes for Onyeka. On the season, Onyeka is a 9th-rounder in punt-FT% builds in only 23.2 minutes with 9.0 points, 6.3 rebounds, 1.1 dimes, 1.3 blocks and 0.6 steals.

Darius Bazley (18%)- I’m cool if you want to ignore most of the Oklahoma City roster given how volatile they’ve been, but Bazley is starting to make some noise again. Over his last three games, he ranks inside the top-80 for 9-cat with 13.3 points, 6.3 rebounds, 1.3 triples and 1.7 blocks. Bazley’s biggest issue is that he tries to do way too much, but lately it seems like he’s embracing a glue-type role and is doing all the little things out there. “I’d say I’m a lot more comfortable,” Bazley said of his new bench role. “Of course it was a change of scenery at first. Embracing it more.”

Talen Horton-Tucker (18%)- The Lakers are coming off a 2-game week but now have two straight weeks with four games each. He’s been held to 19 minutes in two straight, but did have three fouls in each. Despite that, he’s still averaging a respectable 13.6 points, 3.0 dimes, 2.6 rebounds, 1.0 steals and 1.2 triples in 25.0 minutes through five January games. If the Lakers can convince Russell Westbrook to stop playing darts with the top of the backboard, THT could have more usage too.

Chimezie Metu (6%)- The Kings are said to be very high on Metu and it’s easy to see why, as he competes, runs the floor and can hit from deep. Richaun Holmes’ return doesn’t scare me too much, as Metu has played 70% of his minutes as a four this season. That means the only thing we really need the Kings to do is to move on from Marvin Bagley which is very likely at the deadline. Metu has produced back-to-back gems in only 22.5 minutes, averaging 13.5 points, 6.0 rebounds, 2.0 dimes, 1.5 steals, 1.0 blocks and 2.5 triples.

Cedi Osman (15%)- Stick with him. He’s only shooting 38% from the field and 60% from the line over his last four, but the minutes and usage are still there. He’s also averaging 28.0 minutes despite the cold spell, so you’ll want to be holding him when he figures it out.

Day’Ron Sharpe (7%)- He was a major letdown vs. the Thunder, but the Nets didn’t exactly set him up for success by resting several key players. If Nicolas Claxton (hamstring) and LaMarcus Aldridge (foot) both continue to miss time, Sharpe will be worth streaming. Over his last three, he’s been solid with 12.7 points, 6.7 rebounds and 1.7 blocks in only 21 minutes per.

Isaiah Hartenstein (6%)- It’s the same story as last week. We’re just waiting on him to get the green light as he’s been the best big on the Clippers this season. Plus, Serge Ibaka and Marcus Morris are now on the trade block.

KJ Martin (5%)- When his minutes start getting close to 30, be ready to add quickly. Look back and see how he finished the final few weeks of 2020-21 to see what kind of upside we’re dealing with.

Robin Lopez (4%)- A monster stream whenever Mo Bamba and Wendell Carter Jr. are out.

Thomas Bryant (25%)- The Wizards have a three-headed monster at center. Bryant does have a decent fantasy resume in recent years with some nice upside too, but he needs to clear 25+ minutes and I don’t see that happening yet.