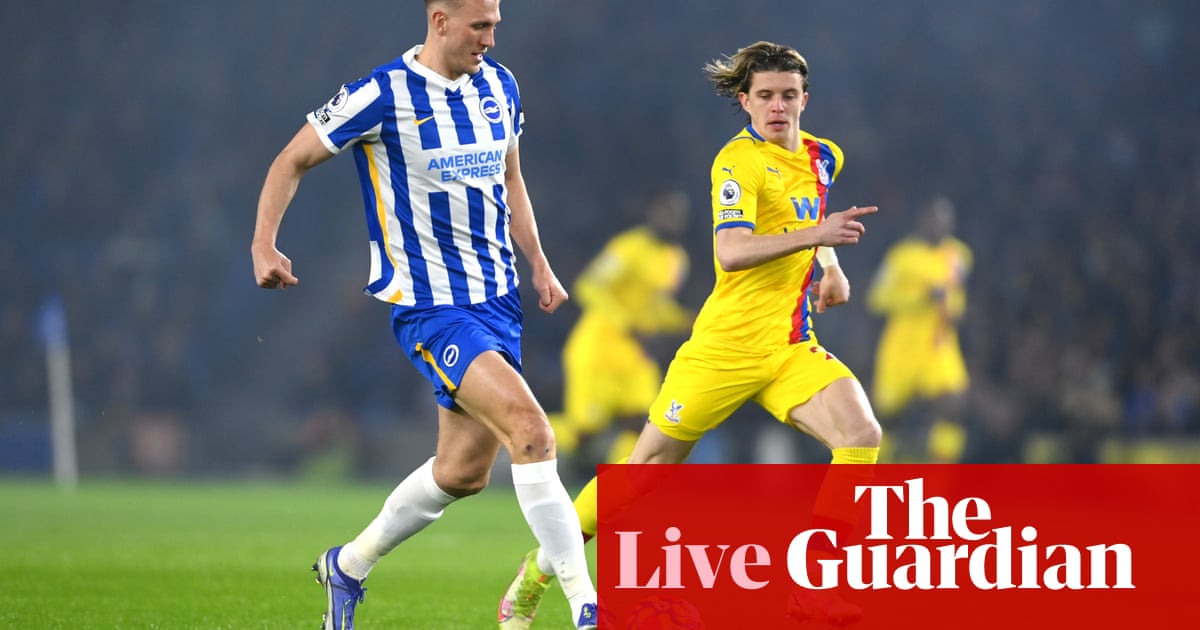 5 min: Mitchell slips with the ball at his feet in his own area. MacAllister strips the prone Palace player of possession and cuts back for Trossard, who can’t get a decent shot away despite a nice shift of feet. Brighton have started the better.

4 min: Lallana and Mac Allister exchange crisp passes down the middle of the park. Lallana tries to slip Moder clear down the inside-right channel but Andersen is wise to his game and intercepts.

2 min: A slow and scrappy start on the south coast.

Palace get the ball rolling … but only after a knee is taken. The gesture is met with warm applause. There’s no room for racism.

Here come the teams! Brighton are in their blue and white stripes, while Palace are in second-choice yellow with a blue and red sash. The visitors arrive to a barrage of boos, then the hosts are met with rafter-bothering cheers. A proper atmosphere at the Amex, the sort you’d expect when two arch rivals are about to get down to serious business. We’ll be off in a minute!

Patrick Vieira talks to Sky. “We are never satisfied. You always want more. But to be honest, we are in a good place. We have a good number of points and are playing the way I want the team to play. Inside the box in both areas, we need to improve as a team. We are a team. Of course when Wilfred Zaha is there, you are strong. But when he is not there you have players who are capable of taking responsibility. The game is about the team. They have talent. Conor Gallagher is doing well, I don’t want to put pressure on him, but he is like a Frank Lampard.”

Graham Potter has a quick chat to Sky about those late, late goals that keep cropping up in this rivalry. “We keep going to the end, which is important. We want to try to play well and get the game won earlier, but it’s not as simple as that in this league. You have to fight to the end. It’s a nice quality to have.”

Victory for Brighton tonight would see Graham Potter’s side leapfrog Wolves into eighth spot. They’d then be just a couple of wins away from the Champions League places. Should Palace claim all three points tonight, they’ll edge ahead of Southampton and Leicester and make it into the top half of the table, where they’d be right on Brighton’s shoulder.

Palace make one change to the XI named ahead of their 2-1 cup victory at Millwall. Odsonne Edouard comes in for Jean-Philippe Mateta. Eberechi Eze will make his first Premier League start of the 2021-22 campaign.

The latest edition of this geographically strange but historically passionate derby kicks off at 8pm. Make sure you stick around until 9.45pm, then, because each of the last three matches between Brighton and Crystal Palace have concluded with a perception-altering goal in the 90th minute: two equalisers for the Seagulls and a winner for the Eagles. More of the same tonight would be most entertaining. It’s the 109th A23 derby. It’s on!