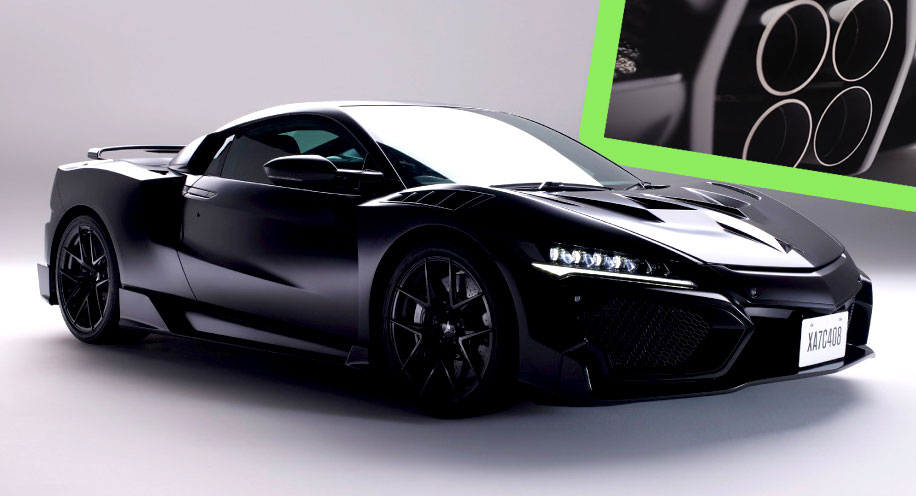 The current-gen Honda NSX is essentially reaching the end of its life cycle, but that didn’t stop tuners like ARTA from continuing to customize them. Called “Legavelo”, the car they brought to Tokyo Auto Salon is a carbon-bodied NSX limited to just five units.

While it may look a bit edgy and unrefined, the blacked-out NSX’s shape is said to be reminiscent of the function-over-form nature of GT race cars. The comprehensive body kit includes new bumpers, new fenders, a new hood, new side skirts, a new tail gate, a new wing, a new roof, a new B-pillar, and even a new fuel door, and as mentioned before, it’s all carbon fiber reinforced. Additionally, the interior features new suede upholstery as well as carbon and silver trim.

Read More: Just 30 Examples Of The 2022 Honda NSX Type S Will Be Sold In Japan

But given ARTA’s racing know-how, this kit isn’t just for show, as it features functional fender air outlets to relieve pressure in the wheel wells, as well as a functional diffuser to produce added downforce. Other performance-related upgrades include in-house designed forged aluminum wheels as well as a Pagani Huayra-esque quad-barrel exhaust.

See Also: Acura NSX Will Return In The Future, Likely As An EV, But There Are No Plans Right Now

There aren’t any upgrades to the engine other than that exhaust, but with 573 hp (581 PS / 427 kW) and 476 lb-ft (645 Nm) of torque on tap from the car’s 3.5-liter hybrid V6, the five eventual owners probably won’t be disappointed with its performance. Not to mention the fact that since all the body panels are now carbon fiber, the car likely weighs less and should show a measurable difference in driving dynamics.

Check out our full coverage of the Tokyo Auto Salon here.