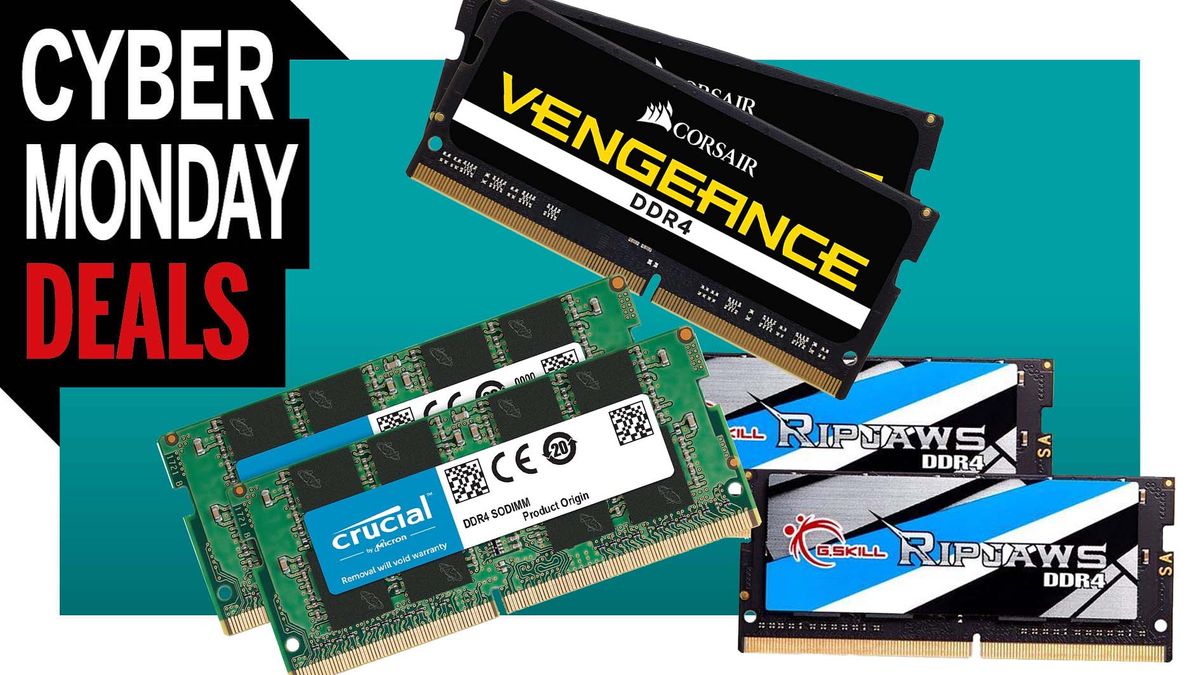 Thinking about adding more RAM to your laptop? Now might be a decent time to do it as Cyber Monday takes hold over at Newegg. I’ve spotted a couple of SO-DIMM RAM kits going for a decent amount of money under their usual selling price, including this Crucial 32GB (2x 16GB) DDR4 kit for $102. Not a bad price for a healthy dose of additional memory capacity.

This Crucial kit runs at an admirable 3,200MT/s, which should make it a good fit for either AMD or Intel-powered systems, and runs at 1.2V. Its CAS latency sits at 22, which should also prove more than fast enough for most needs combined with that speed.

Similarly, you can grab the mobile equivalent of Corsair’s popular Vengeance RAM for $137.99. That’s not much of a discount, just $10, but it’s still down to one of its lowest prices ever by our making. The specs are actually pretty similar to the Crucial kit’s, however, at 3,200MT/s, a CAS latency of 22, and 1.2V.

The same goes for the third kit I want to highlight, the G.Skill Ripjaws DDR4 64GB kit (2x 32GB) for $179.99, which matches speed and spec of those above but bumps up capacity to a serious 64GB. That should prove more than enough for the life of the laptop.

These kits should play nicely with many gaming laptops, though the only way to be sure is to check your laptop’s compatibility. Some laptops may not support up to 64GB or RAM, or may come with soldered RAM sticks, meaning you can’t remove them or add more. There are also systems with more unusual RAM configurations, like some of Asus’ ROG Zephyrus systems that come with soldered RAM and just a single SO-DIMM slot.

Most ‘standard’ gaming laptops offer two SO-DIMM slots, and since all of these kits are two sticks a piece you shouldn’t run into any issues in that regard. Compatibility is something you should absolutely check, though, and while your laptop’s manual is a good way to do it, there are also tools online for the job, like Crucial’s RAM compatibility checker.

So when should you upgrade your gaming laptop’s RAM? Sometimes we recommend you do so when buying a budget system, as dropping system memory from the more widely utilised 16GB to a slimmer 8GB is often the first port of call for a system manufacturer saving costs.

The bump to 32GB will prove more than ample for gaming, though, it must be said. However, if you use your laptop for more than a game here or there—say you’re a chronic Google Chrome tab-a-lot or are using demanding apps on the go such as Blender or Adobe After Effects—then the greater RAM capacity will prove useful.

As for the upgrade process itself, that will vary laptop to laptop. Assuming you have available SO-DIMM slots available to you, it should be a fairly simply process for most gaming laptops to remove the rear of the device and access these. However, it may be best to follow an ifixit or YouTube tutorial to find out the easiest way to go about doing that, and to avoid accidentally pulling a ribbon cable out of whack and doing some damage to your machine. And it’s also probably worth checking the process out for your specific laptop first, just to see how comfortable you are about the operation before you click the buy button.

There are desktop RAM deals over in our Cyber Monday RAM deals section, if that’s more your bag. It is a far easier upgrade, after all. RAM and SSD storage have become one of only few silicon products not to see vastly increased pricing this year, but remain as good an upgrade as any for your gaming PC.