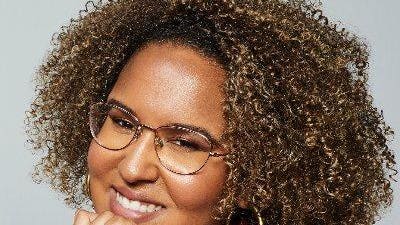 In the world of podcasting, Brittany Luse is a legendary name. She’s a co-host and co-producer of The Nod with Eric Eddings. Formerly a producer and host at Gimlet Media, Brittany also co-hosted For Colored Nerds, an independent podcast about race, news, and pop culture. On her latest venture, she’s the host of YouTube’s first ever podcast that explores how creatives are making it happen in the digital space by following their passions.

The Upload: The Rise of the Creator Economy — a 5-episode series that will go behind-the-scenes into the businesses of the people whose videos we watch every day.

I caught up with Brittany and we spoke about how she broke into podcasting, how she became to biggest fan of Blackness, and her new show.

Grove: When did you first realize that you love to tell stories?

Luse: Oh my gosh. Um, I mean, I think that’s probably one of the first things that I discovered about myself as a kid. I always loved to talk. Every single one of my report cards mentioned that I socialized too much and all of those things. When I was a kid, I was always participating in acting, drama, or theater since I was really small. Then, I realized how much I loved writing. I loved the idea that I could get so much excitement and enjoyment out of a book and that there was a way that I could put words together that would give somebody else that feeling. When I was in the sixth grade, I realized that I was funny. I realized more often than not when I say something and people laughed and that was a really good feeling.

Grove: I’ve read a quote that you said, “I’m the biggest fan of blackness.” First of all, wish I would have thought of that. Did you come up with that on the spot?

Luse: [Laughs] I would say the exact verbiage just came to me as some last-minute inspiration. Anytime we’ve ever had to come up with our tagline for anything, it’s always this process of going back and forth, having a bunch of ideas, putting things on the whiteboard. At the end of the day, when my co-host Eric and I co-hosted the first version For Colored Nerds and The Nod, that was our process. He’s also my best friend of like, 16 years. We both love pop culture and there are so many things outside of mainstream pop culture that Eric and I both love. But when it comes down to it, the nucleus of our work is just how fascinated we’ve always been with Black history, Black culture and how Black culture influences pop culture here and internationally. That was just a quick distillation of just how we feel and what we always wanted to be the center and the North Star on the work we did together on our podcasts

Grove: Why is podcasting been such a great medium for you to express your love of Black culture and to tell stories?

Luse: Podcasting has changed a lot since I entered the field seven years ago but seven years in podcasting is like a lifetime. I feel like that Rip Van Winkle who fell asleep for 100 years. Although the industry has changed a lot, one of the things about it that I think is still true is that there is a relatively low barrier to entry. I mean, when Eric and I started podcasting. I was technically a marketing manager at a multinational communications company. I loved my coworkers but just as much as I was planning conferences, I was also like, making sure we had enough milk in the refrigerator and that the kitchen dish towels were clean. It wasn’t like, I had some fancy job that I was working in media or content creation or anything like that. Eric and I started our podcast in our spare time, while we were both doing different jobs in corporate America. We were able to like reach a bunch of people and get a nice-sized audience and was given opportunities to do our work with more resources and on a larger scale.

We were able to do that without having connections, without having money, without having traditional institutional support that you tend to need if you want to be successful in almost any other medium. Anybody can really start a podcast and as long as you’re passionate and consistent with it, you’re going to reach some type of audience. I mean there are people who have audiences way larger than mine and there are also people who are reaching a solid, you know, three dozen people and they rocking with them. I think that there’s something really special about the fact that you can make something on your own with relatively low investment as far as equipment is concerned, and be able to see the world similarly to you or people who want to understand how you see the world and are fascinated by how you see the world.

At the end of the day, listeners are hearing a story or a conversation and there’s a certain intimacy and immediacy to that and you just can’t replicate in any other medium.

Grove: How does it feel to be the first YouTube podcaster and launch The Upload?

Luse: When I was approached about this project, I was really excited about it because I love watching YouTube. I think especially during the pandemic, there’s something about that direct-to-camera delivery that makes you feel like you’re in a part of a conversation. I think that’s what a lot of people actually relate to similarly with podcasting. They’re listening to it and they just want to start talking to hosts because they’re like having this conversation too. That’s kind of how I think it feels to watch a lot of content on YouTube because it just feels like you’re being welcomed into someone’s world, or in an intimate, parasocial relationship with them. YouTube for me. I kind of first dabbled in it when I was in college. I was coming out of college and entering the workforce in my hair I needed to kind of come together. Natural hair was really becoming a thing in like the late aughts and I was watching YouTube videos to learn how to style my hair and products even eventually found my hairstylist on YouTube. You know, the relationship is strong.

But what really appealed to me about this project and what made me want to get into it was that it was going to be about the creators behind the creator economy. The point of the podcast is to really like lift up the hood and show how YouTubers have been able to create successful businesses from their passions. The real hook of the project was being able to talk to people who had in found things that they were passionate about, and wanted to share with other people. They tapped into an audience and have been able to employ their spouses or spend more time with their kids or work with their friends and still be able to do the things that they’re passionate about. These are real businesses that are making real money and they have real stakes in these businesses but at the end of the day, they’ve been able to use the platform as a way to expand their love for something that was important to them and that’s something that I can definitely relate to. I had such a blast interviewing everybody for the show and I absolutely fell in love with their stories just their excitement for for their work. Also, it was amazing to see them dig into what motivates them, what makes them tick, and what drives them to create the businesses they have.

Luse: [Laughs} This is a piece of advice that I think is helpful and it’s something that I know to be true. The biggest takeaway that I had from interviewing everyone is something that I already I think knew in my spirit but it was something that always bears repeating. As I’ve been transitioning into freelancing finding my voice in writing or finding my voice hosting other shows like this one, after working specifically on one main project for so long, it’s to not be swayed or distracted by trying to make yourself sound like, look like, or act like somebody else. I think it’s important to remember to let inspiration inspire you. Knowing who you are is good enough. I think that’s something that kept coming up with each of the creators that I talked to and they were each so different. They each had different motivations. They each had different passions. But it was so incredible to see that that was sort of the through-line. They were all people who showed up, kind of like as they were, and met people in an authentic way and their audiences had such a strong response to that.

Grove: Lastly, what do you want the listeners to leave with?

Luse: That’s a really great question. I think we want the listeners to walk away with the understanding of just how big the creator economy is, just how sizable it is and you know, it’s not going anywhere. It’s not something that’s going away or that can be ignored. The creator economy is something to be taken seriously. But more importantly than that, the creators that I spoke to, are really the show and I feel like I’m just set dressing. If the listeners walk away with anything, it’s just how inventive, innovative, savvy, and passionate these people are. They have real businesses and they’ve been able to build real businesses off of their interests and by doing things that they love. That took no small amount of work and no small amount of focus. Their success has been the result of so much hard work, drive, and creativity. At the end of the day, these are just hardworking people who focused and honed in on something that they love and really gave it their best shot by being themselves. So I think that’s probably what I want people to walk away with.