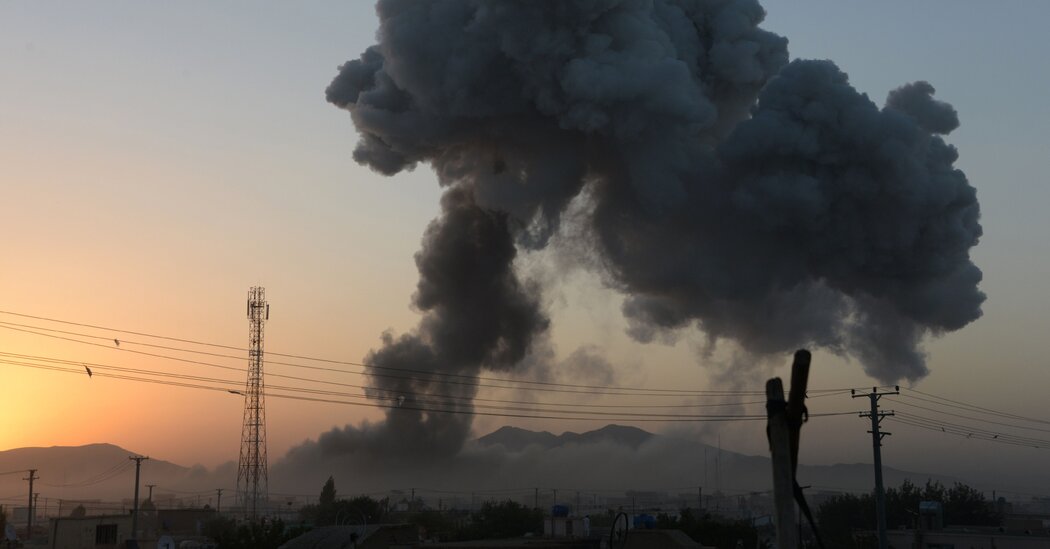 Hussain had just arrived at his office in Afghanistan’s capital when the world seemed to explode around him. It was the morning of May 31, 2017, and a truck bomb had just detonated, boring a crater in the earth, killing more than 150 people, most of them civilians, and releasing a shock wave that shattered glass across the city.

Hussain suffered head and leg wounds in the blast, one of the largest in two decades of war, and was in constant anguish during months of surgery.

The still-lingering pain was made more acute this past week when Hussain watched the new acting minister of interior — Sirajuddin Haqqani, the leader of the very group accused of carrying out the attack — honoring the people who had consigned him to a life of agony: the Taliban’s ranks of suicide bombers.

“Instead of asking for forgiveness, they are commemorating the suicide bombers,” said Hussain, who asked to be identified by first name only out of fear of retribution from the Taliban. “And I will never forgive.”

On Tuesday, the Taliban government brought together families of suicide bombers at the Intercontinental Hotel in Kabul, praising the deaths of their children and siblings in the fight against the U.S.-backed coalition and Afghan government, and giving them condolence payments and a promise of land.

The new government’s decision to so publicly memorialize its suicide bomb squads seemed to be both an effort to appease the aggrieved families for the movement’s use of their loved ones as weapons and an overt attempt to rewrite the history of the war by championing the bombers’ deaths as the highest level of sacrifice. In short, it sought to professionalize the role of suicide bomber.

“Their sacrifices are for religion, for the country and for Islam,” Mr. Haqqani told the crowd in the gilded ballroom of the same hilltop lodge attacked by the Taliban in 2011 and 2018.

As the Taliban government seeks international recognition after its countrywide takeover this summer, broadcasting an event that honors a tactic long seen as terrorism would seem to do little to help. The Taliban have claimed that suicide attacks were against military targets only, but civilians were often killed and wounded by them.

And while the event delivered a message to the Taliban’s supporters, it was bound to alienate parts of the Afghan population grappling with the group’s return — especially the families of the victims. After more than 40 years of war, the ceremony was one more painful reminder for a population already traumatized by a slew of armed actors, including the Soviet Army and the U.S.-led Western coalition that invaded in 2001.

“The suicide attack by itself is a shameful, cowardly and inhuman act. And justifying such a horrific action to prove yourself legitimate is also certainly shameful,” said Yaser Qobadiyan, whose sister was killed by the Islamic State in a suicide attack in Kabul in 2018 and whose father died in a 2006 car bombing presumed to have been carried out by the Taliban.

“The Taliban should give land and money as compensation for the families of the victims of their suicide attacks,” he added.

The public display also raised questions of how the Taliban will remember the tens of thousands of soldiers killed and wounded while serving in the previous government’s military, and how — or if — their family members will be compensated. This leaves the newly appointed minister of martyrs and disabled affairs, Abdul Majeed Akhund, in a perilous position, having to reckon with two versions of the war and the meaning of sacrifice for those who participated on both sides.

Killing others through one’s own self destruction has been a tool of war for centuries, but according to the United Nations the first suicide attack believed to be carried out in Afghanistan did not occur until Sept. 9, 2001. That’s when foreign operatives of Al Qaeda assassinated Ahmad Shah Massoud, the leader of the Northern Alliance group fighting the Taliban.

The Taliban’s eventual use of frequent suicide attacks, experts say, was most likely connected to a 2003 video by Osama bin Laden in which he called for “martyrdom” operations against the enemy. In the years after the video’s release, the number of suicide attacks in Afghanistan began to climb, first in a trickle. But by 2006, the number had risen to more than 100, and it never abated.

By the end of the war, the Taliban’s use of suicide attacks had evolved from a tool of terror to an integral military tactic, used to seize territory and win battles. Those who carried out the attacks wore slick uniforms and were championed as elite in certain units.

“People told us that fighting with Americans was like fighting with the mountains,” Mr. Haqqani said in his speech this past week. “Allah almighty promised us that one day you guys will be successful, and our teams were discussing with each other, that we have to find suicide bombers to fight against Americans. Otherwise it is impossible to fight against them.”

The Taliban have said suicide bombings were their answer to the West’s more powerful military technology and equated the choice of self-destruction to the ultimate form of resistance.

When Kabul fell in August and the Western-backed government fled, the Taliban’s suicide bombers were ready to attack. If the capital had not fallen as easily as it did, the group was prepared to flood the city with truck bombs.

“The Taliban is trying to institutionalize sacrifice in a way that’s never been done before in Afghanistan,” said David Edwards, a professor of anthropology at Williams College who wrote “Caravan of Martyrs,” a book about the Taliban and suicide bombing. “This is an act of rewriting history, showing suicide bombers not as disaffected youth, but taking that story and rewriting it as an elite cadre who used their bodies against the technological superiority of the west.”

Watching this week as the families of those who carried out those attacks were compensated, Karam Khan, a former police officer, wondered if his two brothers killed fighting the Taliban would receive the same kind of treatment.

“This kind of propaganda changes ordinary people’s perceptions of those who worked or sacrificed their lives for the republic,” Mr. Khan said. “The Taliban look toward us as their enemies.”