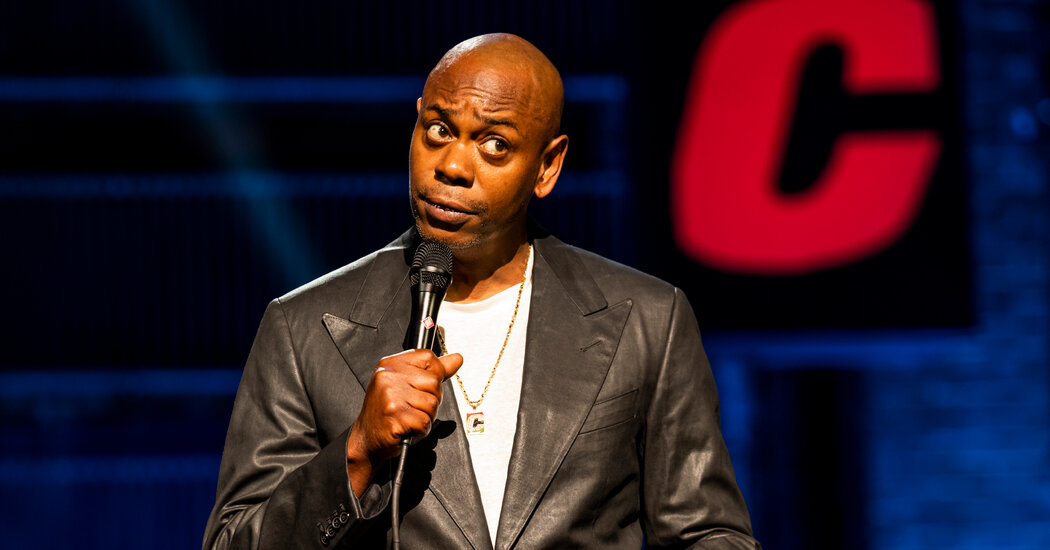 The first time Dave Chappelle wanted to quit a TV show, he didn’t do it. After shooting the pilot of his soon-to-be-forgotten 1996 ABC sitcom, “Buddies,” an amiable comedy about an interracial friendship, the network fired his co-star Jim Breuer, which led Chappelle to tell his manager he wanted to quit.

He was talked out of it, and the show got poor reviews and was canceled after five episodes. When I interviewed one of the co-creators, Matt Williams, several years ago for an e-book about Chappelle, he told me he wished he had built more conflict between the leads. “Then you could capitalize on the charisma of Chappelle,” he said. “But he was different then. He was impish. He was playful, innocent. No danger.”

As controversy boils over Chappelle’s latest special, “The Closer,” I have been thinking about what lessons he might have learned from this early failure. At Comedy Central, he famously did quit and returned with a new mystique. In his current incarnation, he leans hard into conflict, and part of his enduring popularity is his ability to manufacture a sense of danger.

In his last special, “Stick and Stones,” Chappelle took aim at the audience and cancel culture, made many jokes about transgender people and defended Kevin Hart, who had lost the job of hosting the Oscars because of protests over old homophobic tweets. Chappelle earned backlash, negative reviews and the sympathies of the right-wing media, which has become invested in issues of comedy and free speech in the Trump era.

OK, so what did Dave Chappelle do for his next act? Take aim at cancel culture, mock trans people and bring up the same trans friend he mentioned in the last special. By the time he defends Hart again (even if losing the Oscars was the worst injustice known to man, does it deserve two specials’ worth of protest?), you might be feeling a sense of déjà vu.

A few days before “The Closer” premiered, Chappelle predicted he would be canceled; a few days later, he appeared at the Hollywood Bowl at the premiere of his new documentary and talked again about being canceled. The fact that no one thinks Dave Chappelle will be canceled, whatever that means to you, is beside the point.

This rollout was a performance of danger. Of course, what is dangerous is an open question. “The Closer” courts outrage with dopey attacks on #MeToo, and jokes linking Asian people to Covid, but mostly with the subject he has been fixated on for years: transgender people.

When Jaclyn Moore, a showrunner for the Netflix series “Dear White People,” announced she would no longer work with the company while it produces “dangerously transphobic content,” the statement was a reference to the numbers of hate crimes against transgender people and the statistics about mental health and suicide.

There is a tendency these days to quickly conflate language and violence in discussions about controversial art, especially comedy. A punchline, even an offensive one, is not the same as a punch. And yet, it’s hard to imagine that anyone who has attended middle school (or seen a Martin Scorsese film) would not understand that jokes can contribute to a culture of bullying and abuse.

In defending Chappelle, Ted Sarandos, the co-chief executive of Netflix, waded into the issue of the consequences of cruel jokes by arguing that he doesn’t believe there is a relationship between art and harm. It’s a rickety platform to stand on when your company consistently puts out work that hopes to raise awareness, increase representation or move the culture. If art can do good for the world, then isn’t it possible the reverse could be true?

The fallout from “The Closer” is in some ways the most interesting thing about the special. A group of trans employees has planned a walkout on Wednesday to protest. And anger within Netflix led to a rare and fascinating leak of internal viewing numbers, revealing just how little we understand success in the era of minimal transparency by entertainment companies. According to Bloomberg, based on Netflix’s measurement of efficiency, which balances a show’s reach with its price tag, Bo Burnham’s “Inside” (which earned the comic $3.9 million) performed significantly better than “The Closer” (which cost $24.1 million).

Chappelle remains a gifted yarn-spinner who shifts from gravitas to irreverence as deftly as anyone. But judged purely by originality and construction of jokes, he’s a star in decline. There are some startlingly hack jokes, like a well-worn one about Mike Pence’s sexuality, and others about pedophilia and Covid that badly need the shock of offensiveness to make an impact.

Why has he been so fixated on transgender people for so many years now? It may be that he believes deeply that gender is a fact. Maybe he passionately wants to let us know he’s “Team TERF,” as he says in “The Closer” — an acronym for trans-exclusionary radical feminist. Neither of those points come with punch lines. It could also be that he sees pushing these hot buttons as the easiest way to make a big fuss.

One of the major developments in comedy over the past decade has been the rise of comics animated by opposition to left-wing dogma and cancel culture. I have seen struggling comics boost their careers by pivoting right — or, more precisely, anti-left. There’s no question that there is a market for it. While he has lost some fans, Chappelle is a hero to this group now. In middle age, Chappelle acts less like a comic and more like a pundit. He’s far more comfortable than most of his peers in going long stretches without jokes. His recent monologues about George Floyd and the way streaming services have not compensated him for showing his sketch show were both righteous and largely without humor.

In 2006, after he left “Chappelle’s Show,” which made better arguments that jokes should be able to punch in any direction than anything he says in these specials, he proclaimed in an interview, “I feel like I’m going to be some kind of parable.” Then he said he was going to be either a legend or a tragic story.

Give Chappelle credit for this: In a climate in which people seem to get more excited about culture wars than culture, he has figured out a way to be both.

Still, I suspect the long-term impact of the last few specials will not flatter his reputation. Comedy moves fast. And right now, there are more funny transgender stand-ups getting hours ready at comedy shows in the city than ever before. The legacy of “The Closer” might be less in the jokes it makes than in the ones it inspires.