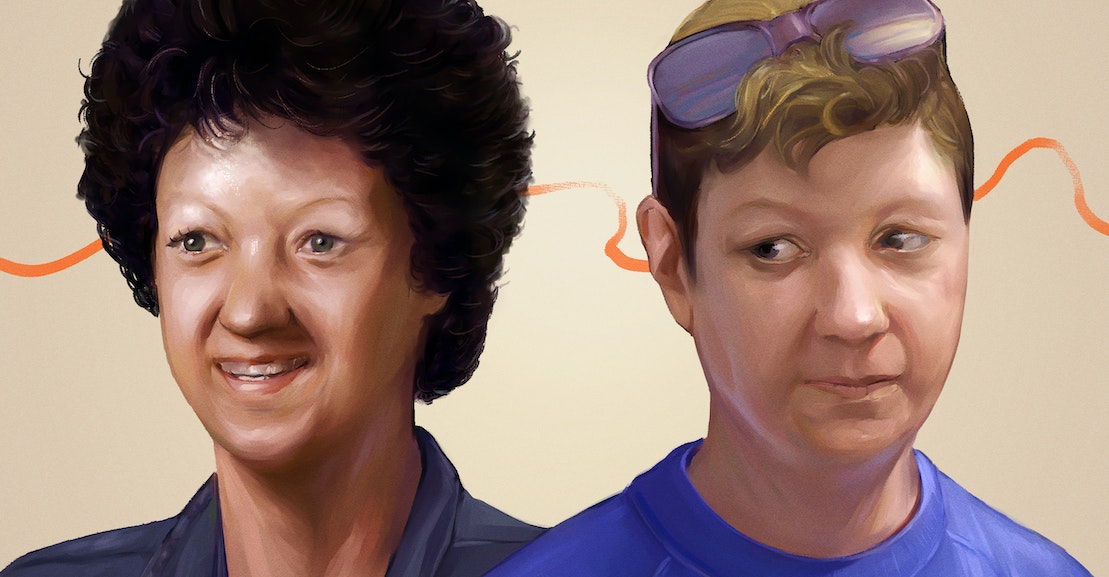 Driven not by ideals so much as by pain and anger, Norma McCorvey was prone to outbursts, and frequently off message.

Her conversion brought a lot of pain, especially for Gonzales, as McCorvey, over time, began to profess that homosexuality now appalled her and “that she herself had never really been gay.” But perhaps no one suffered more from the differences between McCorvey’s public and private personas than her children. Prager tracks down and extensively profiles for the first time each of McCorvey’s daughters. McCorvey’s youngest, Shelley, was unaware of her parentage or her role in the famous case for most of her childhood. But at 18, with McCorvey’s blessing, an “adoption detective” and a tabloid reporter traced her. They told her who her mother was, and pressured her to go public with her own opinions on abortion. The experience was traumatic, and it wasn’t made better when she connected with McCorvey, who told her she should “thank her” for not having her aborted. Shelley never forgave her, and the anger she harbored toward McCorvey haunted her for years, preventing her from developing relationships with her biological sisters.

Almost anyone who worked with McCorvey came to realize the limits of trying to make her into a political symbol—driven not by ideals so much as by her own personal sense of pain, anger, and betrayal, she was prone to outbursts, frequently off message, incapable of being a spokesperson. Toward the end of her life, she started to say, again, that abortion should be legal through the first trimester, and believed that Trump would succeed in outlawing it. Of course, she spun this final reversal to maximum effect. “This is my deathbed confession,” she told the film crew who made the FX documentary AKA Jane Roe. The filmmakers asked if her pro-life turn had been an act. McCorvey said that it was. News outlets, including The New York Times, picked up on the claim that McCorvey had been paid to switch sides. Yet even that wasn’t really true, according to Prager—she had been paid to give speeches and write her book after she converted, just as she had been paid in her past life as a pro-choice advocate. “I was lonely for some excitement,” she told him of her conversion. “I needed to do something that would cause media attention. Isn’t that awful?”

Does it matter that the woman at the center of Roe v. Wade changed her mind? Prager excels in revealing the messy, complicated people at the heart of America’s abortion fight; their motives, he seems to say, are much more tangled than any of them would likely admit. Boyd, the doctor, begins performing abortions after awakening to the necessity of women’s reproductive freedom—inspired, in part, by a childhood crush whose reputation was ruined by an unwanted pregnancy. But he prioritizes his work over his family, bringing an end to his marriage. Weddington takes ever greater credit for her role in Roe, eventually all but erasing Coffee from the litigation that was her most significant achievement. Coffee struggles with money and career management to such a great extent that, when Prager tracks her down later in life, she is living in poverty with her partner in a small town in Texas.

None of the people who populate this book is a perfect hero, nor are there perfect villains: Prager makes the convincing case that Mildred Jefferson, who became president of the National Right to Life Committee and whom Ronald Reagan credited with awakening him to the horrors of abortion, found her way to a career as a pro-life spokesperson in large part because of racism. The first Black woman to graduate from Harvard Medical School, Jefferson was denied her dream job of being a surgeon due to sexism and bigotry in Boston’s medical establishment. The work she went on to do as a pro-life leader allowed her the professional notoriety a traditional career in medicine hadn’t. She was praised by one politician as “a beautiful, articulate, educated, black woman, a surgeon, and not even a Catholic, but a Methodist.”