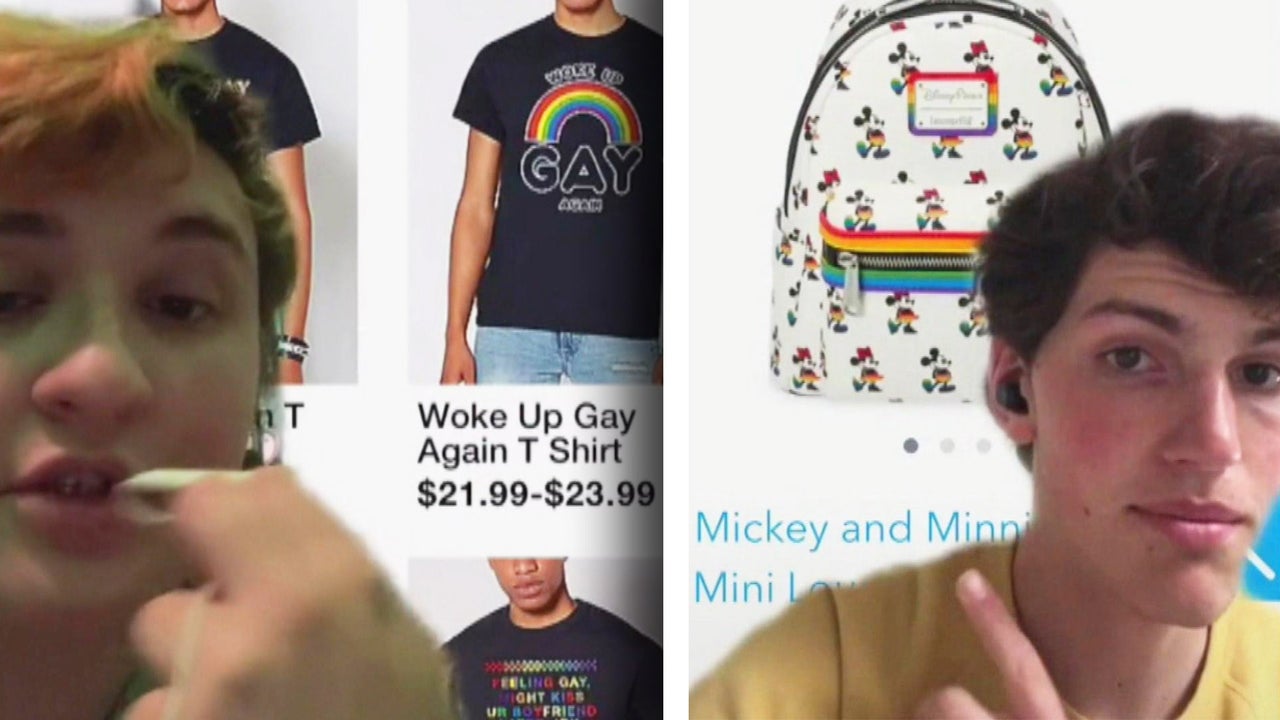 “What trans person is wearing this?” Nicole Brennan, an artist from Brooklyn, New York, lamented on a recent TikTok video. She’s talking about a pair of shorts sold by a major retailer, with hearts on each butt cheek in the unmistakable blue-and-pink striped pattern of the trans pride flag.

Harry Nelson, a 20-year-old TikToker, had similar thoughts about Disney’s Pride Month collection. “You’re going to sell this,” he said, pointing to the Pixar logo, complete with the lamp and ball, in rainbow print, “after doing whatever the hell this was,” showing an image of Officer Specter, an animated lesbian cyclops unicorn cop Disney marketed as its first LGBTQ character, to appear in the upcoming film, “Onward.”

The trend of roasting companies’ Pride collections on TikTok is undoubtedly funny, with many LGBTQ creators even embracing some of the tackier designs in a tongue-in-cheek way.

But all of this points to a deeper problem: rainbow capitalism and the performative behavior corporations tend to engage in during Pride Month.

“Disney’s Pride collection really angered me this year because that is a company that has the power to create meaningful representation … that would let queer kids feel seen and help them understand who they are … yet refuses to,” Nelson told Inside Edition Digital.

Speaking directly to fashion brands, Brennan explained, “I’m not saying it’s bad to have all of these rainbows out in public, but on the flip side, these companies, the majority of them, are not queer-owned, and are not donating the majority of their profits, if any profits at all, back to LGBT organizations.

“It just really brings up the question,” she continued, “where is the motive here?”

For Blake Pruitt, an organizer with Reclaim Pride Coalition, the answer is profit. “Queer people are used both as marketing tools by corporations to sell their products and also as consumers to market to during the month of June and all year,” he told Inside Edition Digital.

Pruitt’s New York City-based group was born out of a concern of corporate sponsors taking over Pride Parades around the world in the shape of floats, merchandise and rainbow designs.

“It is harmful because it is changing the narrative of Pride. Pride has almost become a celebration of the ‘war’ being over when in reality queer people still face a never-ending list of challenges and prejudice that cishet (cis-gendered, heterosexual) people do not,” Nelson said. “These big companies do nothing about it, but every June they are trying to make a profit and pretend they care.”

Reclaim Pride Coalition now hosts Pride demonstrations and celebrations that “returns it to what it started as, which is a community protest event that began the year after the Stonewall riots,” Pruitt explained.

“You just show up and march,” he said. “You don’t have to pay to join, you don’t have to be a part of the corporation. And we marshal ourselves. We keep ourselves safe. We don’t coordinate with the police and we don’t have corporate sponsors. “

Brennan echoed the concern that Pride Month has become very commercialized. “People seem to treat Pride and June as a party and kind of a holiday,” she said. “This isn’t just an excuse to have a cocktail and have a party. There’s still so much to fight for.”

But she does see some advantage of the LGBTQ community becoming more visible in America through a brand. At 23 years old, she explained that even when she was growing up, gay symbolism seemed rare.

“If there’s a kid walking through Target with their parents who may not support them at home, or they may still be in the closet and they’re afraid to tell their parents and they see those rainbows in the store, that’s a good feeling,” she explained. “Even [queer] people that may have grown up in the 60s, or years ago and they’re seeing this now, and seeing the world changing.”

Nelson agreed. “You never used to see companies make products for Pride,” he said. “I understand why a lot of people love these collections, and I have many queer friends who happily purchase pride merch proudly every June.”

But behind the rainbow socks, ally tank tops and slogans touting equality, both Brennan and Nelson worry about anti-LGBTQ policies corporations may be supporting behind closed doors.

“How are they treating LGBTQ employees if they’re hiring them at all? Do you have queer people in your executive board and making these decisions? Who is designing these queer products for Pride Month?” Brennan suggested. “If trans people still feel unsafe to use your bathroom, that’s performative.”

Nelson agreed with these sentiments. “Having worked in retail, at companies that changed their logos to rainbow during June, not once did I feel these companies did anything to make me or my queer coworkers feel safer and accepted,” he said.

Nelson continued, “I also think these collections are purchased by a lot of non-queer people who want to wear them to be allies. This could be a positive notion but it also enables people to fail to examine prejudices they still might have even if they truly believe they are not homophobic.”

But that’s just the tip of the iceberg. Many companies that have a presence in Pride Parades around the world and are identified by Human Rights Campaign (HRC) as some of the “Best Places to Work for LGBTQ Equality” are also ones that have donated significantly to anti-LGBTQ legislations and politicians, according to a study by independent journalism newsletter Popular Information.

“The NYC Pride Parade has become this 10- to 12-hour advertising event,” Pruitt said. “We’re being used as a way for these corporations to shield all of the egregious environmental, political causes and people who they are giving money to, by saying, ‘We had a float at the pride parade,’ or, ‘This is our Pride collection,’ or, ‘We’re donating some money to GLAAD, but we’re also donating to Republican senators who are responsible for the deaths of trans children by legislation.’”

The Walt Disney Company emphasized to Inside Edition Digital that in honor of their 2021 Pride collection, they are continuing to support inclusivity in the workplace for LGBTQ employees and are donating money to groups that support LGBTQ communities around the world.

For Pruitt, it’s not enough for organizations to pledge a certain percentage of their Pride earnings to an LGBT non-profit organization. “Even if these brands are giving 5% of their merch sales to whatever these huge non-profits with CEOs who make a lot of money they are partnering with, it’s not really cutting it.”

But those looking to represent and support the LGBTQ community shouldn’t avoid purchasing rainbow-themed merchandise altogether.

Brennan runs a fast-growing Etsy shop, where she sells buttons with pronouns, earrings that say “Be Gay, Do Crimes,” and patches with the words “Gay Cousin,” among other products with catchy leftist slogans and bright designs.

“We’re here year-round,” she said. “Support your queer friends and family year-round, support queer-owned businesses, especially for your Pride merch and just your everyday things that you would buy because there’s queer owned businesses everywhere that sell all sorts of things.”