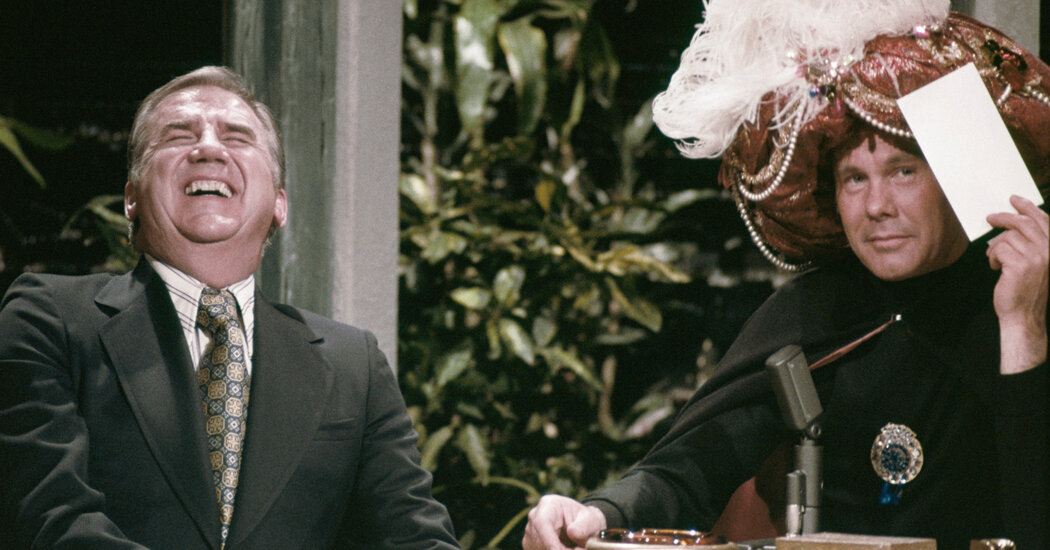 Several years ago, Conan O’Brien’s talk show did a bit about Andy Richter’s forgetting how to do his sidekick job after a summer break. A woman from human resources has to remind him, “You need to make the host believe in the irrational fantasy that he is the funniest person in the world.” She instructs him, “Laugh first, think later.”

In the long, rich history of making fun of talk-show sidekicks, this was not particularly biting, not as scathing as Phil Hartman’s Ed McMahon impression on “Saturday Night Live” or as bleak as the moment on “The Larry Sanders Show” when the buffoonish second banana Hank Kingsley responds to his producer’s telling him he doesn’t suck by saying: “That’s one of the kindest things anyone has ever said to me.”

What made the jokes about Richter so gently absurd is that no one has more persuasively countered the popular image of the sidekick as a pathetic sycophant. As O’Brien finishes his run on late night on June 24, he leaves behind a massive legacy, a comedically ambitious fixture on late night for nearly three decades who influenced a generation of oddball comics. And yet one of the most impressive accomplishments of his work belongs to Richter, who reinvigorated the role of the traditional sidekick.

While Richter expanded and refined the job, he also earnestly performed the old-school work of nightly sidekicking (laughing at jokes, making the host look good) without ever sacrificing his voice or dignity. No mean feat since the relationship between host and sidekick has long been defined by a vast disparity in power. If the host is the king of this court, the sidekick isn’t the jester so much as the flatterer, the yes man, the official doormat. The job has always been to set up jokes, but just as often, to be one. And now this tired, often thankless work may be headed toward obsolescence.

It’s difficult to pinpoint the first sidekick, but the founding mother is surely Dagmar (the stage name of Jennie Lewis) who appeared on “Broadway Open House,” the predecessor to “The Tonight Show.” With Jerry Lester as host, her main job was to get ogled and be the object of leering double-entendres. Despite this limited portfolio, she became a sensation, which led to difficulties on the program and, according to some accounts, to the demise of the show, the first of many sidekicks taking the blame for a program’s failure.

The list of fired sidekicks is long. Magic Johnson’s “The Magic Hour,” one of the most notorious bombs in TV history, went through several in a few months, including one, Craig Shoemaker, dismissed during a commercial break. Regis Philbin, the sidekick to Joey Bishop in the 1960s, actually quit on air in an odd act of talk-show repentance, confessing that he had hurt the show enough. Decades later, he revealed that Bishop forced his exit to create a spectacle to goose ratings. It didn’t work (and Philbin later returned).

The early “Tonight Show” sidekicks became major stars but eminently deferential ones. When Jack Paar walked off during a 1960 broadcast in protest at being censored, his sidekick Hugh Downs nimbly took over and finished the show but was careful to never sit in the host’s chair. Of course no sidekick loomed larger in the public imagination than McMahon, who sat next to Johnny Carson on “The Tonight Show” for more than three decades. He knew his job was to laugh at every punchline, never upstage the host and occasionally set up jokes. The sidekick could be funny but not too funny. “My talent is making it seem like I have no talent,” he wrote in a memoir. He did this well.

McMahon was also the butt of jokes just like Dagmar, including many making him out to be a cartoon of the Irish drunk. A typical Carson quip: “The first time Ed saw Niagara Falls, he asked, ‘Does that come with scotch?’” McMahon always played along merrily.

Join Times theater reporter Michael Paulson in conversation with Lin-Manuel Miranda, catch a performance from Shakespeare in the Park and more as we explore signs of hope in a changed city. For a year, the “Offstage” series has followed theater through a shutdown. Now we’re looking at its rebound.

The homogeneous demographics of talk-show hosts have drawn considerable scrutiny, with criticism that the job has long been dominated by white men, who for many decades tended to be gentiles from the Midwest. But there’s been relative silence about sidekicks. Years ago, writing for Slate, Troy Patterson pointed out that Chelsea Handler and Jimmy Kimmel both relied on small Hispanic men working blue-collar jobs as supporting players. They “could surely serve as fodder for a 10-page Latino-studies paper.” For many years, network executives promoted the idea, dating to the radio and television titan Arthur Godfrey, that a talk show was like a family, with the host as the patriarch. Relegating minorities to the lower-status sidekick never received much blowback, as patronizing as it often seemed.

The current popularity of the white network host-Black bandleader pairing evokes the sentimental racial politics of the buddy cop genre of an earlier era. And what to make of the near total absence of female sidekicks? The fact that you rarely hear laments over this disparity may speak to the low status of the job.

As sensitivity to the power dynamics of comedy increased, the traditional sidekick seems, among other things, counterproductive. Anything that looks like punching down is not going to make the host appear better. Audiences are quicker to see cruelty in the way Carson ribbed McMahon. Of course that abusive subtext was always baked into the host-sidekick relationship.

It’s why most of the really funny sidekicks of the last half-century have been fictional or outright spoofs. Long before Hank Kingsley (played by Jeffrey Tambor on “Larry Sanders”), there was Jerry Hubbard, the hilariously clueless, unfiltered sidekick embodied by Fred Willard on the satire “Fernwood Tonight.” Paul Shaffer was a bandleader for David Letterman, but grew into an inspired quasi-spoof, his affectations evolving into a parody of phony showbiz. The terminally underrated Craig Ferguson adopted a similarly mocking take, settling on a skeleton robot sidekick with the delightfully mundane name of Geoff Peterson, who was one of the better characters in late night.

Richter, notably, played it straight. He was part of an explosion of comedic talent that emerged from Chicago improv houses in the 1980s and ’90s, and his strength was in creating comedy on the fly and playing scenes with intelligence even when doing something extremely stupid. In an intentional move to distinguish themselves from David Letterman’s detached approach, O’Brien and Richter didn’t double down on ironic distance, with the sidekick bringing his own earnest silliness to the show. Richter also added pinpoint ad-libs, stole scenes and built on the jokes. He performed the nuts and bolts of the job, setting up the host, laughing a lot, but not when something wasn’t funny. “If I can get Andy to laugh, I know it’s real,” O’Brien once said on the show.

Unlike the early sidekicks, Richter gave as good as he got. When Handler was a guest and poked fun at his weight, teasingly asking whether he floated when he went in the water, Richter didn’t play along, pushing back with a joke: “Do you sink? Maybe it’s that cast-iron heart.”

O’Brien and Richter clearly shared a smartly silly sensibility, and yet, they have very different personalities. O’Brien is at heart a showman, feeding off the crowd, constantly riffing, deflecting, trying voices, insult humor, self-mockery, letting a raging insecurity drive his humor. Richter is a more patient presence, steadying the ship, often indifferent to the crowd. He’s careful to be generous to guests and shift into elusive language when jokes get dicey, but other than that, he doesn’t pander.

In recent years, as the show leaned more on freewheeling banter and less on monologue jokes, Richter has shined. More than any other sidekick, he has carte blanche to cut in. While O’Brien welcomes the audience, Richter sometimes tells the first jokes, improvising with him right from the start. And he even cuts in and improves prepared jokes from guests in interviews.

A key aspect of Richter’s success is that O’Brien has carved out room for him to take center stage. This was a radical break from tradition: O’Brien is clearly fine doing the laughing, not just the jokes. He was a host happy to play the sidekick.

Others have followed suit at times. Seth Meyers regularly plays the straight man to his writers in the running segment “Jokes Seth Can’t Tell,” which helped launch the talk show career of Amber Ruffin. Jimmy Fallon has put the spotlight on his announcer, Steve Higgins, and James Corden begins shows surrounded by writers and production people. But it’s hard to see any nonmusical sidekick today playing as big a role in the comedy of the talk show as Richter did. Is Richter the last great traditional talk show sidekick?

Maybe. It’s hard to imagine another star performer whose main role to the eyes of a casual viewer is to sit near the host and guffaw at his jokes. While it’s not an exact comparison because they perform weekly, Desus Nice and The Kid Mero might offer a view of the future, the next step from O’Brien and Richter. On their hilarious show “Desus & Mero,” they present a more balanced comedy duo, where two funny friends with great chemistry play off each other without rigidly hierarchical roles.

The talk show has always been a more collaborative genre than the common wisdom suggests, and their rapport finally makes this explicit. Instead of being all about the person behind the desk, this show makes the case for sharing the comedic wealth.