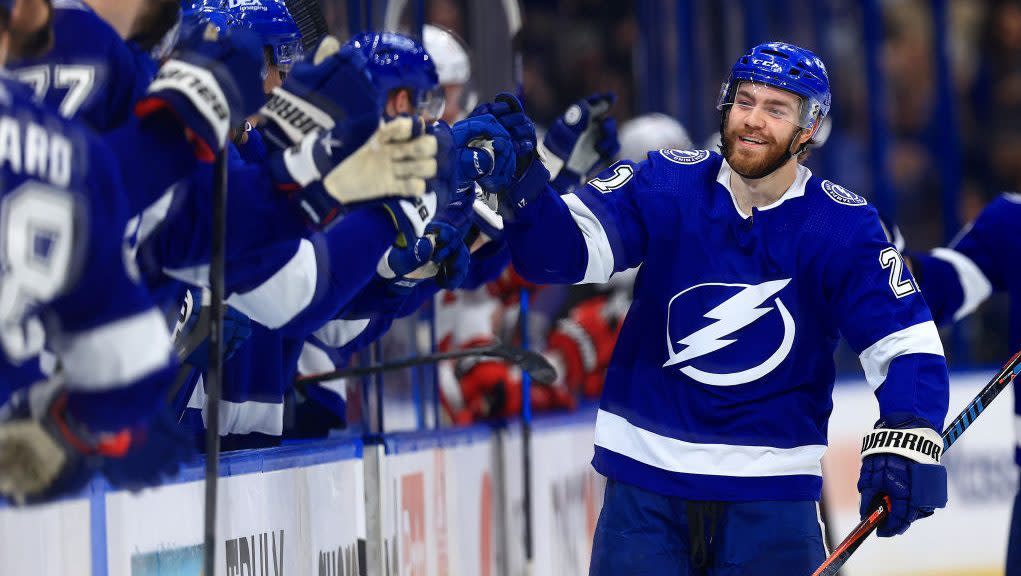 We should probably all be making a bigger deal about Brayden Point‘s historic playoff goal streak, and how great he’s been, in general.

To some extent, Point and the Lightning are taking on a formidable opponent in the Islanders, who they hope to close out in Game 6 on Wednessday 8 p.m. ET (NBCSN / Peacock). To another extent, Point is chasing history.

As it stands, Point is just the second player in NHL history to score a goal in at least eight consecutive playoff games; Reggie Leach is the other, and Leach holds the record with a goal in 10 straight playoff games.

Point also has an outside chance to match or exceed Reggie Leach and Jari Kurri for the most goals in a single playoff run, period. Leach and Kurri scored 19, while Point goes into Game 6 of Lightning – Islanders with 13 goals. Last season, Point scored 14 goals and 33 points in 23 Conn-Smythe-caliber playoff games.

Even if Point slows down, he’s already accomplished a lot. As in, he’s been rubbing shoulders with the all-time greats.

With that, let’s dive into how and why Point has been able to put together this eight-game playoff goal streak, and why he’s been so dominant during the past two postseasons.

Exploiting time and space, and buckets of confidence

As you can see from the video above this post’s headline, Point’s Lightning teammates are calling him “Mr. Clutch.” Steven Stamkos doesn’t know if the playoff pressure even gets to Point, while Nikita Kucherov wonders if the pressure makes Point even better.

“When you’re on a streak like that like I was on, I knew I was going to get a goal before I got to the rink because you’re so confident and you can get to your spots,” Leach said. “I used to leave the house and tell my wife, ‘I’m going to get a goal tonight, for sure.’”

One thing Leach noticed about Point, and other goal-scorers, is that they find ways to avoid traffic. Yes, Point’s scored on breakaways and in dirty areas, but it’s just as much about being elusive.

That’s an area where the Islanders hope to limit Point in Game 6 (and they hope, Game 7). Even if it’s easier said than done.

“You try to take even more space,” Trotz told the New York Post’s Mollie Walker. “The one thing that is a really dangerous thing is he can make plays when you double up on him. He still can make that high-skill play when there’s players [on him]. Players like Brayden and [Nikita] Kucherov and [Artemi] Panarin — which we know from the Rangers — they actually want you to double up on them. They want you to do certain things to them so they can open up other people. That’s the danger.”

When it comes to stopping great players, sometimes teams must feel helpless. Really, how much can you scheme or gameplan when Point scores goals like these in the playoffs?

Some luck, but maybe not as much as some might assume

Granted, there’s plenty of luck to go with all of that skill and swagger.

For some perspective, Point’s indeed a pinpoint shooter overall, managing a precise 17.3 shooting percentage during his regular season career (139 goals on 802 SOG over 351 games).

So, for opponents looking for hope, there’s only a bit. Point probably will see his shooting heater cool off slightly — maybe even during these playoffs, perhaps as early as Game 6 — but maybe not as much as others who’ve been on fire.

As Barry Trotz might agree, it’s not about stopping Point, it’s mainly about hoping to contain him.

James O’Brien is a writer for Pro Hockey Talk on NBC Sports. Drop him a line at phtblog@nbcsports.com or follow him on Twitter @cyclelikesedins.