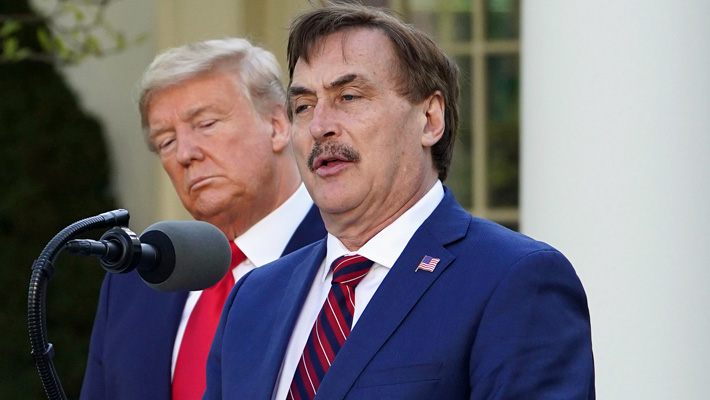 Last weekend, everyone’s favorite deranged bedwear salesman, Mike Lindell, aka the financially troubled MyPillow Guy, held a kooky pro-Trump rally in New Hampshire. It was called “MAGA Frank,” and it featured such 45th president fans as Diamond and Silk, filmmaker and pardoned felon Dinesh D’Souza, as well as the big boy himself. Lindell is so confident about his belief that the failed blogger not only won in November but will be re-installed in the White House that he allowed a Rolling Stone reporter to cover the event, even interview him. And in the finished piece, he had some new deranged things to tell him.

Arguably the most shocking? That the Jan. 6 insurrection — in which violent Trump supporters stormed the Capitol in an attempt to overturn the 2020 election — was a scam. This isn’t a new opinion; baseless theories that folks from Antifa and BLM were posing as DJT fans were floated almost immediately after the failed but deadly attack. But Lindell still subscribes to some variation on that nonsense idea.

For one thing, he admitted to reporter Stephen Rodrick that he’s “never even watched footage of that.” His bona fides thus established, he then went on to claim that, “in my opinion, it was a setup.” Why? Because it had never happened before. “I’ve been to over 50 rallies year. There has never been one incident. And you don’t think it was a setup? Gimme a break.”

Is it a waste of time to point out that it’s hard for Trumpists to storm the Capitol at rallies not held at D.C.? Perhaps. But Lindell had another revelation: In his latest video, entitled Absolute 9-0 — a reference to his belief that the Supreme Court will unanimously vote to reinstate Trump after they get a load of the intel he drops in his latest motion picture screed — he claims that Trump didn’t win. He won bigly. While discussing his film with Rodrick, he doubles down on his claims:

“There was 147 million registered to vote. OK, Biden got 80 million and Trump got 75 million. That’s 10 million extra voters.” Lindell nods repeatedly, proud of his point. In fact, over 213 million American were registered to vote — Lindell was off by just a bit, i.e., 66 million. He then mentions that 1.7 million Pennsylvanians requested mail-in ballots while the election count shows hundreds of thousands more, proving more fraud. In reality, Pennsylvanians requested over 3 million mail-in ballots. As Lindell becomes more caffeinated, the claims become increasingly exorbitant. “Trump won 80 million to 68 million,” Lindell says as conservative outlets line up in the bus for their interview. That would be a 19 million-vote swing. Lindell is a college dropout whose main mathematical background comes from card counting at casinos. He says that number will be confirmed when there are audits done in all 50 states.

There’s a lot in the Rolling Stone piece, including Lindell’s belief that, because he banned him (and Trump) from Twitter, Jack Dorsey “should go to jail.” He brushes off the death threats that people like Georgia Secretary of State Brad Raffensperger has received from Trump supporters, claiming he’s been getting them, too. And he makes a bold claim about his favorite president: “He is the only president in my lifetime who wasn’t in it for the ego and worked only for the people and not for his own interests.”

Despite this, Rodrick describes Trump’s eventual speech at the rally as “autopilot,” as though he couldn’t even bring the pain for his most ardent fan among the home goods market. A shame.