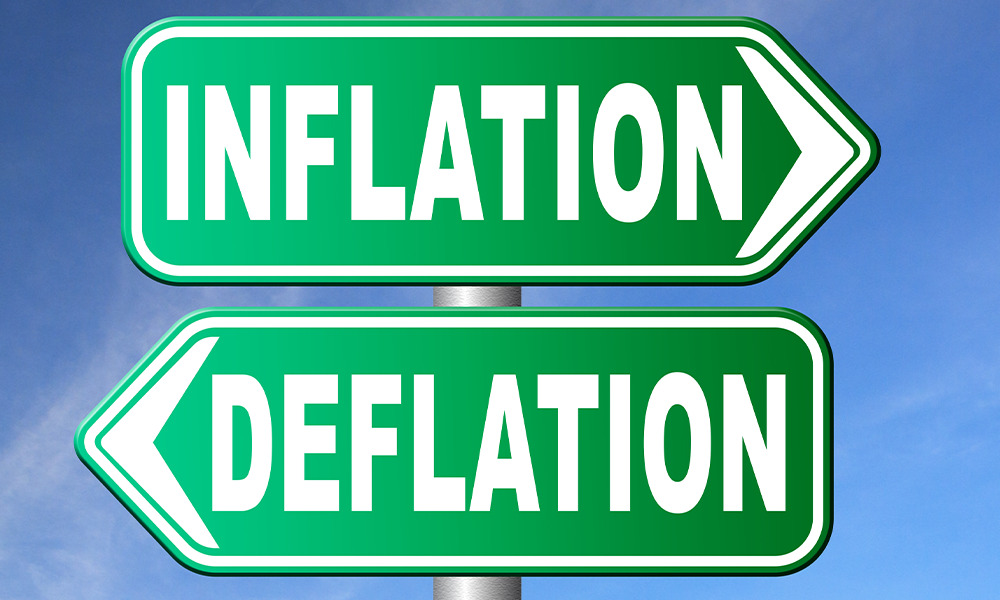 I see the same question in forums, threads, articles and emails: what can I do to protect myself and my family from whatever lies ahead?

Given the uncertainties and extremes that are so evident, recognizing risk is a useful first step, a recognition that is very much out of fashion.

If we glance at the charts of margin debt (loans taken against one’s stock portfolio) which is at record highs, and short interest (bets that stocks will drop) which is at record lows, it seems the primary risk on investors’ minds is FOMO (fear of missing out) of all the fat, juicy guaranteed gains just ahead.

For the few still asking about the source of risk, the general answer takes one of two paths: inflation leading to hyper-inflation or a deflationary collapse of defaults and popping asset bubbles.

It’s easy to find pundits arguing for one or the other, but do we have the initial conditions, variables and functions we need to solve this problem and get a clear answer, inflation or deflation?

Consider two variables that are rarely visible in pundits’ arguments:

1) What will benefit the banks?

2) What will benefit the nation’s place in the geopolitical pecking order?

The inflationary camp holds that the soaring debt, public and private, can only be serviced if incomes inflate so households, companies and governments have enough income to make the payments on their soaring debts.

Since this is a self-reinforcing spiral — more inflation leads to more inflation — central banks will be forced to print their currencies into oblivion, i.e. hyper-inflation.

If they ever stop printing, the house of cards (soaring debt) will collapse.

This logic seems sound enough. But once hyper-inflation takes off and people are earning $250,000 a month and a loaf of bread is $250, how will banks profit from households paying off their once-stupendous mortgage (that required 30 years of monthly payments to pay off) with a single month’s pay?

Hyper-inflation will destroy not just the currency but the entire banking sector, which is politically powerful. Will the banks just sit by passively watching their wealth and income being destroyed by high inflation?

One suspects they will use their political power to avoid being ground into dust by hyper-inflation.

The banks would much prefer defaults that they can shift to the government (via bailouts) and deflation, where every monthly credit card/mortgage payment has greater purchasing power than the previous month.

Next, consider the consequences of hyper-inflation on the nation’s currency: it loses virtually all its value. Nobody will want to trade real goods for worthless dollars.

In terms of a nation’s economic power, its currency is the foundation, because if the currency plummets to near-zero then everything denominated in that currency also loses value on the global stage.

A reserve currency — a national currency that is widely held globally because it it’s expected to hold its value, and the market for everything denominated in that currency is extremely large and liquid — is the crown jewel of whatever nation (or entity, in the case of the EU) issues it.

Who would benefit from the destruction of a nation’s reserve currency?

Virtually no one. The nation would be impoverished. So why is hyper-inflation — the destruction of the currency — so broadly accepted as inevitable?

It’s also widely assumed that the Federal Reserve and other central banks control all the variables in setting bond yields, interest rates and inflation. But what if some variables are outside the Fed’s control? What if their claim of controlling all variables is mere PR?

This makes an enormous difference: arithmatic inflation is predictable — 5% a year, for example — but geometric increases lead to hyper-inflation and complete destabilization of the economy and society.

Very few pundits reckon the central banks and governments will choose default and deflation because these will be painful — but what could be more painful than wiping out the value of the currency?

If the wealthy elite own precious metals, farmland, manufacturing, government bonds, etc., then the default of zombie households and corporations (zombies defined as entities that have to borrow more to remain among the living), then why would they care?

Corporate bondholders and marginal lenders would be destroyed, but again, the wealthy need only avoid owning marginal debt to avoid the debacle of default losses.

Ace in the Hole

The politically powerful elites have their ace in the hole: they can demand politicians (who need their contributions to fund their re-election campaigns) bail out the banks, transferring the losses from defaults from private banks to the public sector, exactly what happened in 2008-09.

But once again, are the elites and government fully in control of all variables, or could they be assuming arithmatic functions when geometric functions might actually manifest?

Deflationary defaults can destroy bank assets just as quickly as hyper-inflation, as once buyers vanish (markets go bidless) then the value of assets pledged as collateral plummets to levels no one believes possible.

Entire highrise buildings are sold for the value of the elevator system. Yes, it happened in the Great Depression.

How do we calculate the probability and potential intensity of destabilizing social disorder?

Humans Are Only Human

It’s widely assumed that the U.S. could never experience the sort of massive, widespread social disorder that occurs in developing-world nations during crises. But humans are humans, and when put under pressure by high inflation/deflation and declining prosperity, people respond in ways that can very quickly escape the control of authorities.

If the consequential variables and functions are not measurable, then seemingly small disorders can spread throughout the entire society — or supply chain.

Where does all this leave us?

We know from studies of human psychology that humans don’t feel comfortable with uncertainty and seek a haven of certainty as quickly as possible. They will cling to anchored beliefs in the face of conflicting evidence and strengthen their attachment to beliefs when challenged. We’re wired for a decisive commitment to a belief structure.

Sustained indecision and ambiguity is uncomfortable. We want an answer, and if there isn’t one, then we’ll make one up or commit to an answer proposed by a pundit, even though that person has no better grasp of the initial conditions, variables and functions as anyone else.

Alternatively, if we can’t possibly answer the question of what happens next, we have to accept that this era’s uncertainties may not be resolvable.

This is an exceedingly valuable insight, as if we embrace this uncertainty, we can avoid defaulting to a rigid, brittle false certitude that can only lead us astray if events don’t follow the path we’ve committed to.

In other words, we all want certainty, but this isn’t possible because 1) the variables are invisible 2) the functions are unknown and 3) the “solution” (predicted path) depends entirely on the initial conditions, in which small changes completely change the outcome.

Faced with the knowledge that so-called fat tail risk (i.e. a geometric function replacing an arithmatic function, and small events triggering large consequences, i.e. non-linear dynamics) is real but unpredictable, then we’re forced to think through these supposedly low-probability risks and devise a response that we can implement because we already thought it out.

This is the difference between having a pre-planned response and panic.

Everyone Has a Plan Until…

Mike Tyson’s memorable quote offers great insight into risk and uncertainty: “Everyone has a plan until they get punched in the mouth.”

The average person considers the odds of getting punched in the face as very low. The martial arts student doesn’t follow the line of thinking that because the odds appear low, there is no need to learn self-defense. Rather, being prepared to defend oneself is a permanent state of readiness, perhaps rusty and imperfect, but there nonetheless.

Events that devastate the majority financially greatly enrich the few who bet on non-linear dynamics.

But that doesn’t mean we can’t embrace uncertainty and fat-tail risks and think through responses in advance, and plan a hedging strategy that accounts for possibilities from 1) nothing changes to 2) everything changes.

The point here is that embracing uncertainty means we accept that the market might still punch us in the face, and we might make mistakes or fail to perform as we’d hoped.

But the process of planning layers of response may well help protect us from irreversible losses and bad decisions made in the chaos of fear and panic.