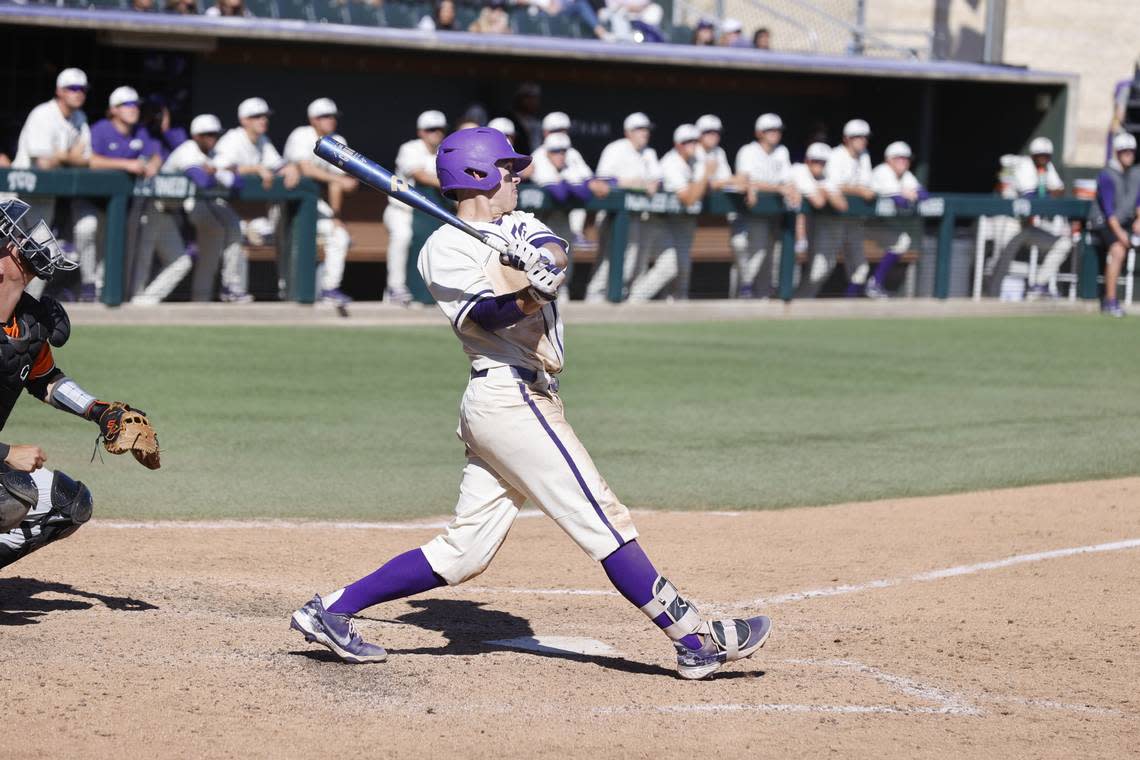 Utah isn’t exactly known for baseball. The state has produced just 40 players who reached the big leagues compared to say, Texas, which has seen 953 make it.

That, however, doesn’t mean the state is barren of talent. Just look at what Brayden Taylor is doing as a true freshman at TCU.

Taylor has emerged as arguably the best player on a Frogs team that is 27-9 and ranked No. 8 in the country. Taylor leads the team with 10 home runs and is batting .308 with 40 RBIs.

In TCU’s 9-1 victory over UT Arlington on Tuesday night, Taylor played a starring role. He drove in the Frogs’ first run with a single in the third inning; he then started the scoring in what became a five-run fifth inning with a two-run double; and he capped his night with a solo home run in the sixth.

“I’m just going out and playing the game the same way each time,” said Taylor, who has made 23 starts at third base, nine starts at second base and one start at shortstop. “It was super fun just to go out there with the guys and play baseball. That’s all you have to do.”

Taylor is playing the game at a level higher than what’s expected from most freshmen. This is a guy who has now reached base safely in 15 straight games and has 13 multi-hit games on the season.

Credit goes to TCU for finding a talent such as Taylor from a state that isn’t a baseball hotbed. Coach Jim Schlossnagle praised associate head coach Bill Mosiello for the recruitment that brought Taylor to TCU.

Mosiello scouted Taylor thoroughly during a high school showcase in Arizona one summer. While most coaches bounce between multiple fields and only catch glimpses of prospects, Mosiello sat on Taylor for an extended period over multiple games.

“Bill was very impressed by Brayden,” Schlossnagle said. “He felt like Brayden was going to have an impact, but I don’t think anyone could have foreseen the power numbers [as a freshman]. You just never know how a guy is going to handle his freshman year but he’s a super talented kid with great mental makeup.

“I don’t know where we’d be without Brayden.”

Taylor would say the same thing about TCU. The only other schools that showed interest in him in high school were Utah and BYU.

Once Taylor visited TCU, he was sold.

“I didn’t have many offers coming out of high school,” Taylor said. “Once I came here, I thought there was no other option. When I first arrived on campus, I felt like I fit in. I felt like this was home.”

Taylor said his early college success can get “a little overwhelming” at times, but he credited his teammates for their support through the highs and lows. It also helps that he comes from a baseball family.

Taylor has been playing the game since he was 5 years old. His dad played at Utah Valley and his mom was a softball player.

“I played a little bit of basketball growing up, but baseball has always been my passion,” he said. “I love it.”

It’s easy to see that passion. Games such as Tuesday have become the norm for Taylor. He had a grand slam to secure TCU’s sweep over Oklahoma State on Sunday.

“Brayden is playing with a lot of confidence,” Schlossnagle said. “It’s a quiet confidence, but it’s neat to see a young player like that come into his own.”

Get the latest news regarding TCU athletics in your inbox every Thursday morning.