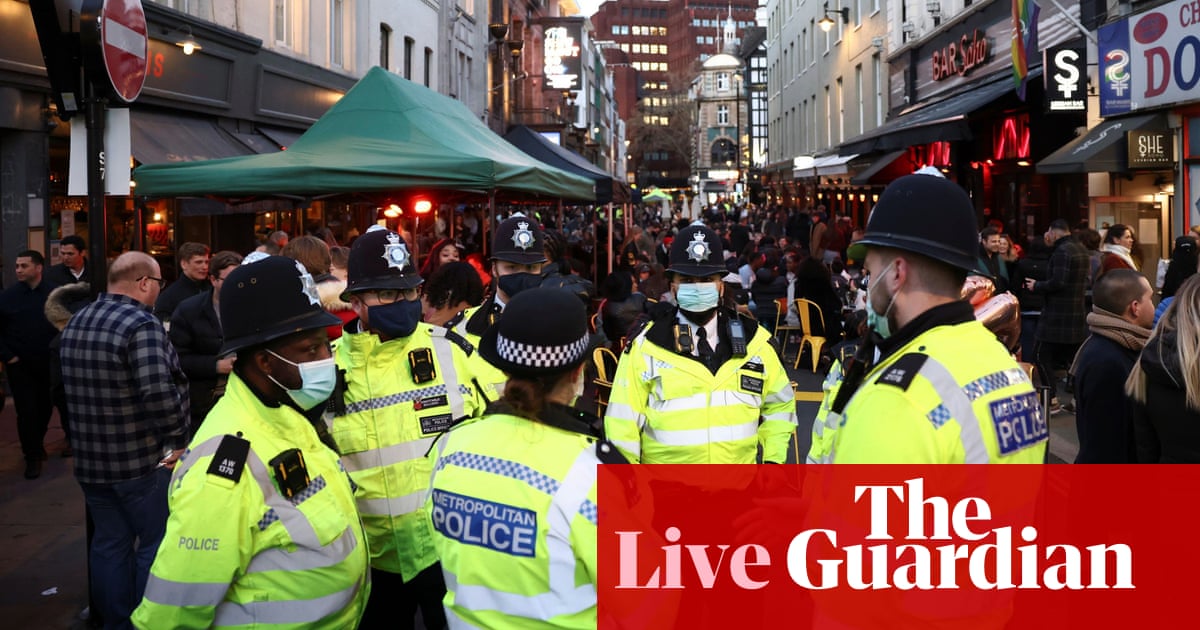 UK unemployment edged down in February as the jobs market showed further signs of improvement before the easing of Covid restrictions, my colleague Richard Partington reports.

Boris Johnson has used an article in the Sun this morning to restate his opposition to the plans for a European super league. To his credit, unlike some of his predecessors, he does not feign an interest in the sport that he does not really have (he starts by saying he is “far from an expert”), but he does show that he understands why fans hate the ESL concept so much. He says:

You only need a pulse to know that football is not a brand or a product. In fact it’s so much more than even a sport.

Football clubs in every town and city and at every tier of the pyramid have a unique place at the heart of their communities, and are an unrivalled source of passionate local pride.

And the joy of the game’s current structure, one that has kept people coming back year after year, generation after generation, is that even the most seemingly endless period of frustration is made bearable by the possibility, however remote, that one day you could see them rise up.

After all if Leicester City can win the Premier League, if Nottingham Forest can be champions of Europe not once but twice then maybe, just maybe, your team can do the same.

But that can only happen if the playing field is even vaguely level and the ability to progress is universal.

The European Super League guarantees neither, which is why it has been roundly rejected by the people who matter most: the fans.

There will be some reference to this story here today, because it has become a major political issue, but for full (and much better) coverage, do read our separate European super league live blog. It’s here.

Good morning. If you found the endless changes to coronavirus regulations that we’ve had over the last year hard to follow, you were in good company. Today Her Majesty’s Inspectorate of Constabulary and Fire & Rescue Services, which regulates the police, has published a report on policing in the pandemic (pdf) and it says police officers also found it hard to keep up with what was allowed and what was not.

Here are the main points.

Many forces expressed frequent frustration at the lack of notice they were given about some changes in the law and guidance. Some senior officers told us they were unable to provide timely and clear operational guidance to frontline officers …

The first set of regulations was made on 26 March 2020 and came into effect even before they were laid before parliament. In the months which followed, the regulations were amended and supplemented a considerable number of times, when lockdown restrictions were eased or strengthened, imposed, relaxed and re-imposed, in different parts of the country, for different periods and with differing intensities. The first set of regulations covered 11 pages; the last set extended to 123 pages. It was hard to keep up with them.

[Police officers’] difficulty was made worse by a widespread confusion in relation to the status of government announcements and statements by ministers. Ministers asserting that their guidance – which had no higher status than requests – were in fact “instructions to the British people” inevitably confused people. In some cases, police officers misunderstood the distinction, and appeared to believe that ministerial instructions were equivalent to the criminal law.

For example, the 2-metre distancing ‘rule’ has only ever been in guidance (aside from some requirements on the hospitality sector such as licensed premises and restaurants). The request to ‘stay local’ has never been a legal requirement. The suggested limits on the number of times a person could go out to exercise in a day and for how long were only ever in guidance, not regulations …

It is not the function of the police to treat government guidance, however well-intentioned (as it undoubtedly was), as rules of the criminal law. Ministers may create criminal offences only if authorised by parliament to do so; they may not do so by the simple expedient of demanding action from a podium or behind a lectern.

And as difficulties arose and some well-publicised mistakes were made, public confidence in, and support for, the police were inevitably put at risk.

Despite these extraordinary difficulties and pressures, a very significant proportion of police work to deal with the lockdown was measured, proportionate and sound.

There is more on the report here.

Some police forces in England and Wales did not follow Covid rules, say inspectors

10am: The court of appeal delivers its judgment in Jeremy Corbyn’s appeal against a preliminary ruling that remarks he made about a pro-Israel activist were defamatory.

12pm: Downing Street is due to hold its daily lobby briefing.

12pm: Election experts Prof Jane Green and Prof Michael Thrasher speak at a UK in a Changing Europe briefing on the May elections.

After 1.15pm: Kemi Badenoch, the equalities minister, makes a Commons statement on the much-criticised report from the Commission on Race and Ethnic Disparities.

2.30pm: Sir Jonathan Jones QC, the former head of the government’s legal department, gives evidence to the Commons justice committee on how Covid laws have worked.

5pm: Boris Johnson is expected to hold a press conference at No 10.

Johnson is also holding talks today with the football authorities and fans’ representatives about the plans for a European super league.

Covid is the issue dominating UK politics this year and Politics Live is often largely or wholly devoted to coronavirus at the moment. But I will be covering non-Covid politics too and – depending on what seems most important and most interesting to readers – sometimes these stories will take precedence.

For global coronavirus news, do read our global live blog.