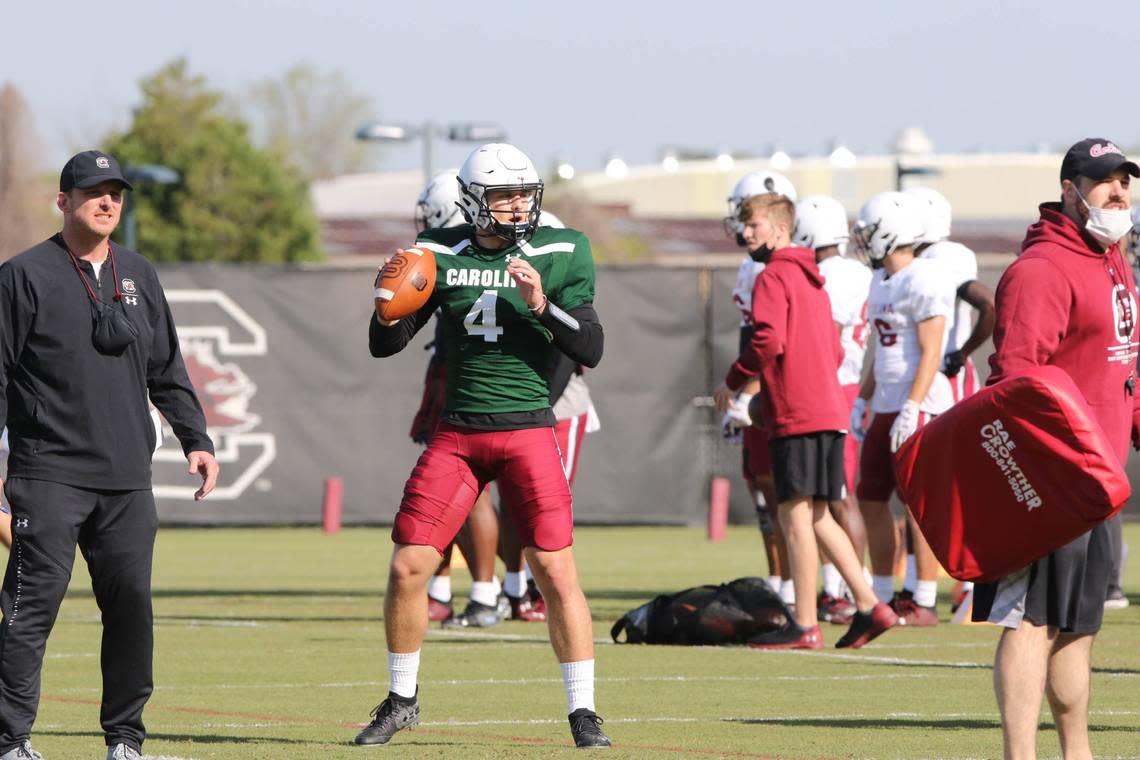 Luke Doty felt a familiar arm come to rest on his shoulder.

Along the sideline at Williams-Brice Stadium during South Carolina’s 17-10 loss to Missouri on Nov. 21, starting quarterback Collin Hill draped his arm around Doty, offering a brief message before the then-freshman headed onto the field.

“Collin Hill came up to me and put his arm around me and just said: ‘Play your game. Go out there and get after it and just do your thing,’ ” Doty recalled.

Fast-forward five months and Hill has departed Columbia. Doty, ahead of Saturday’s spring game, sits as the clubhouse leader for the Gamecocks’ starting quarterback spot with an increased maturity and sense of self since he was thrust into action in the late stages of last season.

“I didn’t have time to really think about (taking over for Hill),” Doty said Monday. “I just focused on going out there and doing what I could to make a difference, and that’s something that I’m going to continue to bring each and every single Saturday this fall.”

Still just a sophomore, Doty speaks with poise. He handled questions Monday on new offensive coordinator Marcus Satterfield with precision and detail. He later elaborated on how he works to ignore both the praise and ire that assuredly awaits should his play decide wins and losses come fall.

Doty said this spring has proved a course in leading by example — bringing “the juice” as he describes it. During South Carolina’s latest scrimmage, he spent the bulk of his time on the bench coaxing those near him into a consistent energy.

In the weight room, as senior center Eric Douglas tells it, Doty is always the last guy in, choosing to stand at the door and high-five each member of the team as they jog past him.

“It’s not fake with him,” Douglas said in March. “He genuinely means everything that he does.”

Doty’s performance has similarly mirrored his renewed leadership style, pushing the rest of the quarterback room to match his play and energy.

Through four weeks of spring ball, first-year head coach Shane Beamer hasn’t exactly kept his cards close to his vest when it comes to the quarterback spot. He’s raved about Doty’s efforts early, going as far as challenging the rest of signal-callers on the roster to make the quarterback competition just that.

“Somebody has got to come and be better than Luke,” Beamer said last month. “And if nobody does, then Luke will continue to get the reps with the first team. It’s certainly a competition, but those other guys, they got to make it a competition as well.”

Doty finished his outing against Missouri 14-of-23 for 130 yards with one interception, while adding another 11 rushes for 65 yards on the ground. But the memories of an afternoon that saw the Gamecocks slog to just 283 yards and 10 points against a Tiger defense that surrendered more than 400 yards and a smidge over 32 points per game in 2020 have since been spun forward.

Doty said Monday the 71 passes and 41 rushing attempts he accrued over eight games last season have helped slow down the game for him this spring. He feels he’s seeing windows he didn’t see a year ago. He’s also been able to let routes develop further downfield behind an offensive line that returns four starters from last fall.

“We’re comfortable with each other, so that means we can trust each other more,” senior offensive tackle Dylan Wonnum said of how added cohesion has aided South Carolina’s offensive line play. “It’s all about trust. If you don’t trust your partner to the left or to the right of you, it can kind of mess you up.”

Five months ago, Doty trotted off the South Carolina bench to take the reins from Hill in a season that fell short of expectations and concluded with a coaching change.

Doty conceded he barely remembers his first drive against Missouri — a 10-play, 43-yard odyssey that ended in a 47-yard Parker White field goal. For nearly 27 minutes Monday, however, his words offered onlookers a glimpse of the poise and maturity that’s come with months of work and four weeks worth of opportunity.

“Obviously, there’s still a lot to work on,” Doty said. “But you know, I’m really excited for what’s to come.”

Where: Williams-Brice Stadium in Columbia

Watch: Streaming on SEC Network Plus