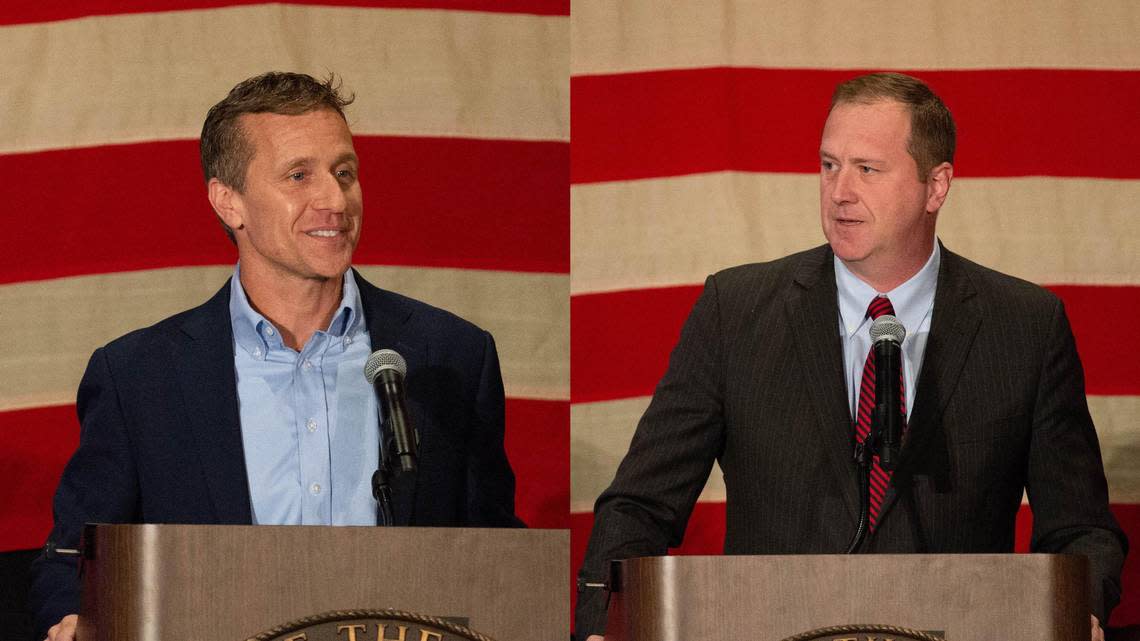 The two Erics from Missouri called themselves fighters against the Democrats in Washington. Both condemned Joe Biden and the mainstream media. Both swore total allegiance to Donald Trump.

But of the two Republican candidates for U.S. Senate, it was Attorney General Eric Schmitt who received the warmer reception Saturday night at the Jackson County GOP’s Reagan-Lincoln Day Dinner in Blue Springs.

In the conference center ballroom decked with “Trump 2024” flags, former Missouri Gov. Eric Greitens drew scattered applause from the mostly maskless audience as he rattled off a list of endorsements from attorney Rudy Giuliani and others connected to the former president. But it was Schmitt who was able to describe how he was using his office to take the fight to Biden.

“I have been alongside President Trump in all those fights,” Schmitt said, before discussing a series of new lawsuits he’s signed on to against the Biden administration to cheers.

“I’m going to take a blowtorch” to Biden’s agenda, he said.

The most popular of Schmitt’s recent actions appeared to be his challenge of the 2020 election results.

Schmitt was one of the Republican state attorneys general most heavily involved in the failed effort to contest the 2020 presidential election, organizing an amicus brief in support of Texas’ lawsuit against swing states that went for Biden.

For Greitens, it was the first political appearance in the Kansas City area since he resigned nearly three years ago in the middle of multiple scandals, including allegations of sexual blackmail and violence. He has denied those accusations but a GOP-led committee in the Missouri General Assembly found them credible, and the Missouri House had launched impeachment proceedings prior to his resignation in 2018.

Greitens did not address the allegations Saturday night and barely mentioned his time as governor, focusing instead on his experiences as a Navy SEAL.

He described Trump’s two impeachments as attacks by the left on a “fighter,” and sought to link Trump’s critics to his own.

“When we got into the race, we were immediately attacked by the Lincoln Project,” he said, referring to the group of renegade Republican consultants who produced a series of widely viewed anti-Trump ads during the 2020 campaign. “If this same group of fake RINOs (Republicans in Name Only) who went after President Trump are coming after me, then we’ve got to be doing something right.”

In interviews afterward, attendees declined to disavow Greitens. But the unmentioned scandal did not go unnoticed.

“I wondered, honestly, I wondered if he would mention anything about that,” said Carolyn Caton of the High Noon Republican Women group in eastern Jackson County. “That’s something I think he’s going to have to address openly and communicate with people about, to make people feel more comfortable.”

Greitens’ campaign manager declined to make him available for an interview after his speech.

Also speaking was Mark McCloskey, the St. Louis attorney and one-half of the couple who brandished guns at police brutality protesters from their front yard last summer.

The incident, captured in a viral photo, led to weapons charges brought by St. Louis Circuit Attorney Kim Gardner and vaulted them to GOP stardom. They’ve fundraised for Trump and appeared as special guests in February at a gun rights rally at the state capitol. In his own speech, Schmitt said he was seeking to get the criminal case thrown out.

There was speculation that McCloskey would himself announce a run for office, and he appeared to be testing the waters in a fiery speech before Greitens that kept the crowd cheering.

Recounting the gun incident in St. Louis, McCloskey claimed the crowd of protesters, on their way to St. Louis Mayor Lyda Krewson’s home, threatened to kill him and his wife. He said schools teaching critical race theory were “poisoning the minds” of youth.

“We cannot go forward with the normal political process,” he said. “We cannot send to DC the typical assortment of posers and egotists and career politicians.”

The Star’s Bryan Lowry contributed to this report.