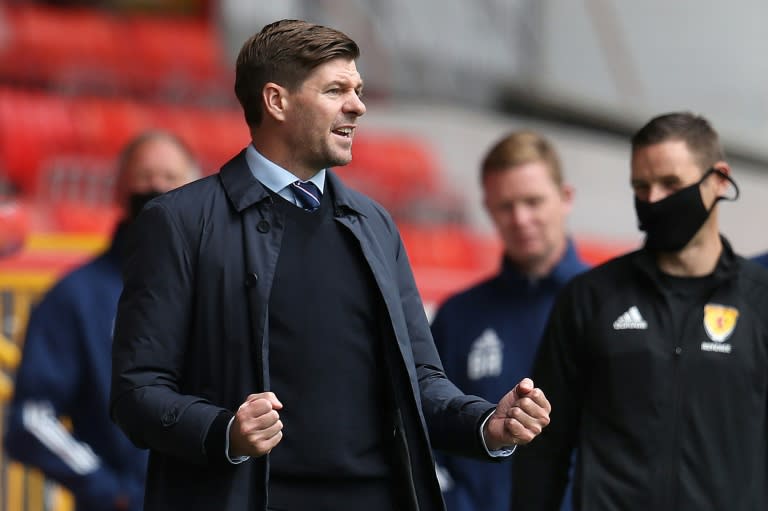 Rangers’ first Scottish Premiership title for 10 years was confirmed Sunday after Celtic’s 0-0 draw at Dundee United left them 20 points behind their Glasgow rivals with six games left to play.

Steven Gerrard’s men have stormed to the title without losing a game to end Celtic’s stranglehold of a record-equalling nine consecutive Scottish league titles.

Rangers were not even in the top-flight for four of those seasons after the club was demoted to the fourth tier after being liquidated in 2012 due to financial troubles.

“This club has been to hell and back over the past 10 years,” said Gerrard after Saturday’s 3-0 win over St Mirren put Rangers on the brink of a first major trophy since 2011.

“I’ve only been part of it for three, but I can certainly relate and I’ve got that feeling and that affection with the fans and I know what they have been through.”

The former England and Liverpool captain never won a league title during his legendary 17-year career at Anfield.

However, Gerrard has transformed Rangers’ fortunes both domestically and in Europe since taking his first senior managerial role in 2018.

The newly crowned Scottish champions have reached the last 16 of the Europa League for the second consecutive season, where they face Slavia Prague on Thursday.

Rangers were denied rubbing salt into Celtic wounds by winning the title at Celtic Park in two weeks’ time in their next league fixture after they dropped points for the 12th time in the league this season.

The same issues that have dogged Celtic all season cost them at Tannadice as the visitors dominated but failed to find the net with 27 attempts on goal.