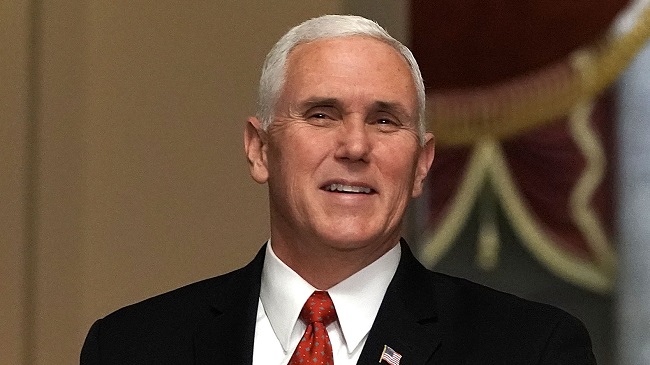 If you’re unlucky enough to suffer a near-death experience, you probably do your best to prevent whatever almost killed you from doing so the next time. Not Mike Pence. Almost two months ago after a mob of Trump supporters stormed the Capitol, some with the intention of actually hanging him, the former vice president wrote a fiery op-ed. No, it wasn’t about stopping the voter fraud lies that nearly got him hanged. It was about amplifying them all over again.

The piece was called “Election Integrity is a National Imperative,” and it was published in the conservative online rag The Daily Signal. The right is angry about HR 1, a Democratic-led bill that seeks to overhaul the nation’s election process. And so Pence decided to combat by parroting misinformation about “significant voting irregularities,” despite no evidence of widespread voter fraud.

And about the events that endangered not only his life, but his family’s life, as well as everyone working in the Capitol building, from congress people to aides to security — and which led to five deaths — he merely said they were “tragic.”

Many found it bizarre not only to minimize a day that could have led to many more deaths and the toppling of democracy. It also seemed surreal that someone would repeat mistruths that almost got him murdered.

Mike Pence is sticking with MAGA and The Big Lie, even though they wanted to fucking kill him. Maybe he really is a masochist.

Mike Pence is still with the terrorists, even after they tried to kill him

Do you know how deranged you have to be to side with people who were trying to murder you?

Mike Pence is just another member of the Trump cult. His religion is not Christianity, it’s white supremacy.

Mike Pence’s next op-ed will be about how comfortable nooses can be. The scratchy fibers can really tickle a guys neck. And don’t get him started on trap doors. He is all in on them.

Mike Pence is throwing his support behind some of the same kinds of discredited ideas that literally put him in danger.

That’s not exactly surprising, but it is amazing. https://t.co/ffUrGeEHzo

Luckily there’s Daniel Dale, CNN’s intrepid, tireless, and — after four years of Trump — exhausted fact checker, who pointed out the lies and distortions Pence wrote, about the 2020 election and about the Democrats’ attempt to clean up the election process.

In any case, seems like a weird stance to take, even for someone like Donald Trump’s former veep.