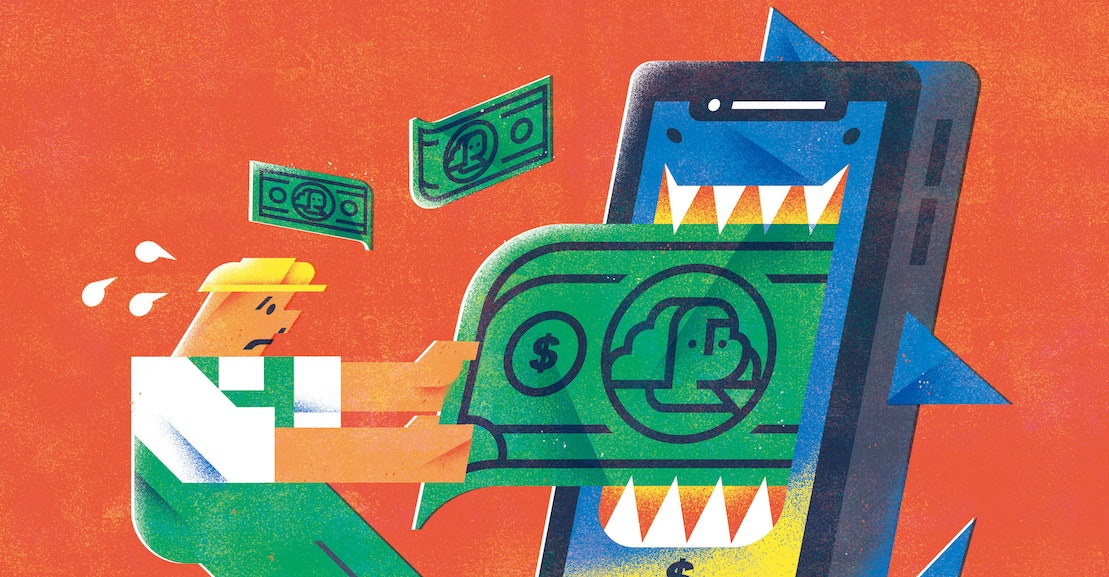 Consumer advocates are very alarmed by the underlying power imbalance between wage-access providers and the low-income workers they serve, exposing once again Silicon Valley’s penchant for dressing up in utopian visions the dystopian brutality of its desire to make money. “If you think about someone working at Walmart, Target, someone like that,” says Keith Corbett, of the Center for Responsible Lending, “their pay is going to maybe be $150 to $200 for a week. They’re desperate for their money, so they’re willing to give up some. But what they’re going to find is when payday comes, the money is not going to be there. They’re going to be in the same boat. These companies know that.”

The obvious appeal of apps like Earnin is that they can be used by anyone looking for a little fast cash. But the real engine for the growth of the industry is a near-demented corporate fixation on cost reduction. In 2018, just as wage access was beginning to come into vogue, two researchers at the Harvard Kennedy School named Todd Baker and Snigdha Kumar published a paper illuminating just how much employers stood to benefit by offering apps like PayActiv as a perk to their workers. Baker and Kumar found that active users of the service were 19 percent less likely to leave their jobs. Extrapolating that number out, an employer the size of Target could stand to reduce its annual costs by more than $100 million—simply by limiting turnover, which forces corporations to spend money on recruiting and training new employees, as well as the overtime that has to be paid out to anyone who ends up filling in for departed coworkers.

From one vantage, this reduction in employee departures can be chalked up to the job satisfaction that comes with increasing financial flexibility. Stephen Middlebrook, a lawyer who previously worked at the Treasury Department and now advises start-ups, including FinTech companies, highlights how popular earned-wage access has become among hourly workers. “Employees view this as a valuable product,” he says. “This is a benefit they consider when they decide where to go to work. And because of that, it becomes important to employers. It’s something they’re going to basically need some form of to provide to employees to stay competitive in the workforce market.”

At the same time, it’s hard to ignore that employees are being drawn into a situation where they may feel perpetually indebted to their bosses. That danger is even more apparent with companies like Kashable and SalaryFinance, which allow businesses to offer their workers five-figure loans that can be repaid through payroll deductions stretched out over more than a year. These companies do have policies that theoretically reduce the risk of the employee falling fully under the thrall of their boss; the interest rates they charge is comparable to that of a credit card and, if the employee leaves their job, their repayments can transfer from payroll deductions to direct debits from their bank accounts. Nevertheless, the Harvard study found that if a Target-sized retailer offered SalaryFinance to its employees, it would generate even more savings than an earned-wage access product might.