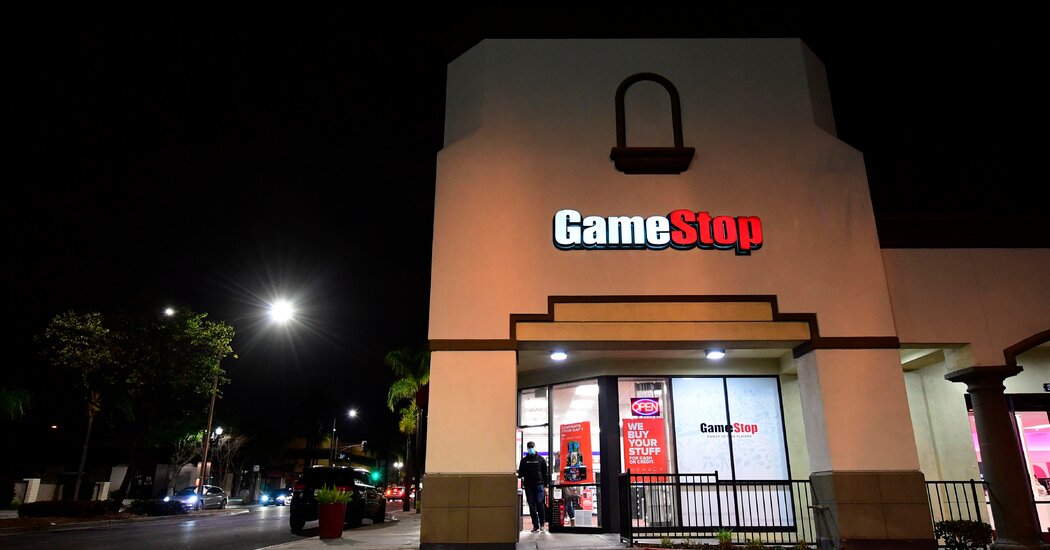 Andrew here. Let’s have an honest conversation about the mania around GameStop — and its larger implications.

Is there something fun about watching the little guys beat the big guys at their own game? Sure.

But that assumes that the game is over. It isn’t.

The truth is that many of the small investors who look like winners after pushing up shares of GameStop could soon become losers, especially those who jumped into the frenzy in the past day or so. And unlike the wealthy hedge-fund managers on the losing side of the trade so far — who probably have more than enough money to cover the mortgages on their second or third homes, if they have mortgages at all — many of these retail investors can’t afford to take a big hit.

Remember when a 20-year-old Robinhood trader killed himself last June after seeing a negative balance of $730,000 in his account?

There is a risk that this trading mania has already gone too far. It looks divorced from any sense of reality or fundamental analysis. On the day GameStop more than doubled in price, the broader stock market recorded its biggest decline in months.

In truth, saying aloud that some small investors may not fully understand the risks they are taking is an invitation for scorn from an angry mob online. I know because I’ve been on the receiving end of it. And it is a fair argument: The markets shouldn’t just serve professionals and wealthy elites — and for far too long, the markets have been rigged against the little guy.

When the GameStop music ends, there will be big losses and finger pointing. The speculators rarely blame themselves. Were brokerages too lax in allowing retail investors to trade options using leverage? Should the stock exchanges have jumped in? Where was the S.E.C.? And backers of GameStop may ask why more than 100 percent of the company’s shares could be shorted in the first place: Isn’t that manipulation?

So what happens next? Bands of investors are already pushing up the stocks of other companies like AMC, BlackBerry and Bed Bath & Beyond.

This likely won’t end well. But imagine a happy, fairy-tale ending to this story: Perhaps GameStop sells shares to reinvent itself. In this scenario, the company would raise billions of dollars to become a genuine e-commerce platform with its own games. Think of Netflix’s transformation from a DVD-by-mail company to a streaming giant. Perhaps GameStop and other beleaguered companies boosted by traders this week could use an unexpected windfall to make a similar leap. Still, a fairy tale is called a fairy tale for a reason.

In other news about the market mayhem:

The Fed keeps interest rates near zero. Officials at the central bank said that they were sticking with stimulus efforts to help the U.S. economy weather the pandemic. Jay Powell, the Fed chair, added that the biggest economic risk was lawmakers doing too little to combat the coronavirus, not runaway inflation.

“Tomorrow our fridges will be empty.” The E.U.’s Covid-19 vaccine shortage has become increasingly acute, with Spain partially suspending immunization efforts for lack of doses and the bloc feuding with AstraZeneca over promised deliveries.

Ant Group plans a major overhaul. The Chinese fintech giant will reportedly turn itself into a financial holding company, making it subject to tighter regulatory requirements, according to The Wall Street Journal. That follows a crackdown by Beijing officials, who halted its I.P.O. last year.

The Biden administration reconsiders arms sales to Saudi Arabia and the U.A.E. Some of the deals struck by the Trump administration to sell tens of billions’ worth of weapons to the Gulf States have been temporarily paused, after Democratic lawmakers criticized the transactions.

Leon Black holds onto a prominent art world seat. Even as he plans to step down as Apollo Global Management’s C.E.O. over his financial ties to Jeffrey Epstein, Mr. Black will remain chairman of the Museum of Modern Art. Some former employees and activists called for him to resign.

After a new activist hedge fund, Engine No. 1., kicked off a proxy fight against Exxon’s board yesterday, the oil giant quickly responded, including by promising to provide updates on efforts to address climate change. Here’s why Exxon, a $172 billion company, responded swiftly to the holder of a mere $40 million stake.

It’s a fight over a cause that Wall Street and Washington care about. Engine No. 1 focuses on environmental, social and corporate governance matters — popularly known as E.S.G. — that have become a big deal.

Exxon may have found itself a “pincer attack.” That’s what the law firm Wachtell, Lipton, Rosen & Katz recently called a two-pronged attack from both E.S.G.-centric activists and more traditional ones focused on financial metrics.

It was records all around for a trio of tech giants reporting their year-end earnings yesterday. And in an upside-down day for the markets, the shares of all three companies fell after the announcements.

Apple recorded quarterly revenue of more than $100 billion for the first time, propelled by sales of its new iPhone.

Tesla reported its first full-year profit, a feat 18 years in the making. Although less than analysts were expecting, it’s a major milestone for the electric carmaker.

Facebook reported fourth-quarter sales up more than 30 percent, and a profit of $11.2 billion, up more than 50 percent. Despite controversy over misinformation and antitrust scrutiny, the social network’s platforms now have more than 3.3 billion regular monthly users, a new high.

Lest anonymous retail traders steal the spotlight, here are two trades by lawmakers flagged by Congress Trading. We are highlighting the disclosures of these trades, as we did earlier this week for House Speaker Nancy Pelosi, because DealBook believes that more transparency around lawmaker-associated trading of individual company stocks benefits the public.

Representative Mo Brooks, Republican of Alabama: Mr. Brooks’s spouse bought shares in Lee Enterprises, a local newspaper company based in Iowa, on Nov. 24 when it closed at $1.02 a share, and sold shares in the company on Jan. 22, when it closed at $1.37. An account jointly held by Mr. Brooks also sold shares in Lee on Jan. 22, according to the form. All three of the trades cost between $1,000 and $15,000.

Representative Gerald Connolly, Democrat of Virginia: A joint account held by the Congressman sold shares of Leidos and SAIC last week, two defense and government contractors based in Reston, Va., part of his district. These trades also cost between $1,000 and $15,000, according to the disclosure form.

The actor Robert Downey Jr. announced yesterday that he had co-founded a series of venture capital funds that would combine money from a series of investors with his own creative and social media teams to bolster climate-focused start-ups.

FootPrint Coalition Ventures is a set of venture funds with a twist:

“I don’t want to just be some guy with a mic out there in the field showing that I give a darn because I’m such a heck of a guy,” Mr. Downey told DealBook. “I really want to be on the bleeding edge of the discoveries.”

Best of the rest

We’d like your feedback! Please email thoughts and suggestions to dealbook@nytimes.com.