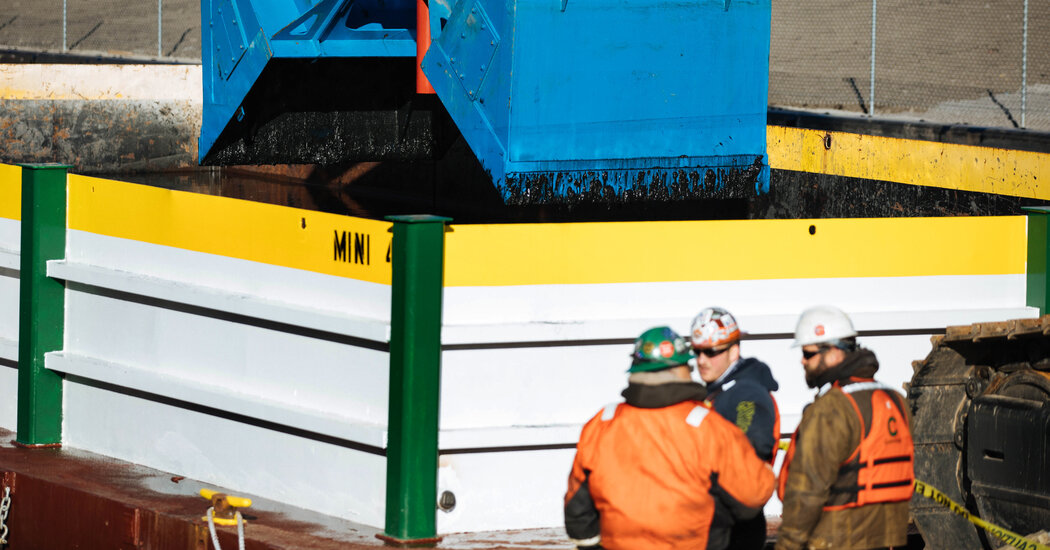 After 150 years as the receptacle of a lot of New York City’s filth, the Gowanus Canal is finally getting cleaned up.

But just two months after crews began scooping toxic sludge from the bottom of the channel, a dollop of the notorious “black mayonnaise” may already have found its way right back into the water.

The Environmental Protection Agency said that a barge carrying 850 tons of muck dredged from the canal — turned black by decomposing plants, animal carcasses and liquid tar — became partially submerged while it was moored in the Gowanus Bay off Brooklyn on Monday.

The agency said that it believes the “bulk of the sediment” remained within a container on the barge and that it was confident that the incident did not pose a health risk.

Still, the mishap revived worries about the dangers of the noxious chemicals that had accumulated in the Gowanus and the possibility that they could be spread to new areas. And some who live near the canal say they still wonder what, exactly, sloshed out of the sunken barge.

In a statement released Wednesday, the E.P.A. said it was still investigating the incident but had found that a small hole in the barge may have contributed to the vessel’s partially sinking. It was not clear what had created the hole.

The agency said that water had been pumped out of the barge, which was patched and moved to a staging site along the canal.

Carved out of a tidal wetland in the mid-1800s, the 1.8-mile canal, which runs from Butler Street to Gowanus Bay, was for many years a passageway for barges servicing oil refineries, chemical plants, tanneries and manufactured gas plants. Industrial waste gushed into the canal, making it one of the most polluted waterways in the nation. It contains several contaminants, including high levels of cancer-causing chemicals known as PCBs and heavy metals like mercury and lead.

A combination of the pollutants and sediment has formed a noxious layer at the bottom of the canal, known as “black mayonnaise” because of its color and consistency.

Before the E.P.A. released an update on the incident Wednesday evening, Brad Vogel, a member of a group of residents advising the agency about the project, said people living near the Gowanus were “concerned that the information about this incident is being dripped out droplet by droplet.”

The barge was moored in the harbor near Red Hook, outside of the canal. Mr. Vogel, the captain of a canoe club called the Gowanus Dredgers, which was formed in 1999 to support the dredging of the canal, said holding sediment there could put other areas at risk.

“I don’t know that anyone in the community realizes that the broader harbor was at potential risk of having an incident like this,” he said.

And though the E.P.A. statement suggests most of the sediment remained aboard the damaged barge, Mr. Vogel said he remained concerned about the concentration of the sediment the barge was carrying.

Typically, after the sludge is pulled out of the Gowanus Canal, it is processed at a site on Huntington Street before it is placed on the barge and shipped off to New Jersey

“What ostensibly sank into the harbor? Is it more concentrated than your average scoopful of black mayonnaise?’” Mr. Vogel asked.

The cleanup project, which began in November, is expected to cost $1.5 billion and could take up to a decade to complete.