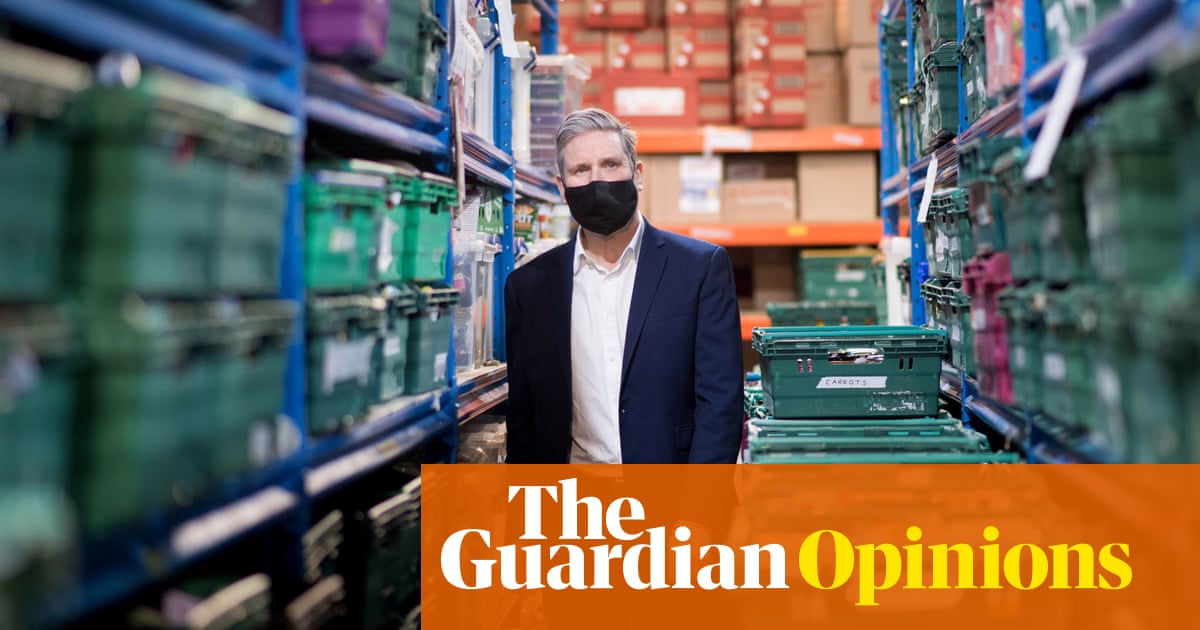 One of the most glaring aspects of the Covid-19 era is yet another Westminster-centred crisis of political leadership, if not politics itself. This may be a polarised age in which the idea of millions being helped through dark times by the people at the top is laughably old-fashioned. Trust in power has hardly been a feature of recent British history. But it has been clear from the start of this crisis that Boris Johnson has neither the gravitas nor the basic administrative talents to offer us any convincing kind of inspiration or comfort, and the surreally poor quality of the cabinet only makes things worse.

And then there is Keir Starmer. In the eyes of most voters, the Labour leader is clearly a vast improvement on Jeremy Corbyn. The skills he developed as a lawyer mean that he does such an enviable job of skewering Johnson and his colleagues’ failures that it has become a cliche to even mention it. The union jacks Starmer habitually appears in front of are clearly intended to tell the people rattled by Corbyn’s time at the top that all is now well again. But for many reasons, the use of such symbols feels awkward and incongruous: here, it seems, is someone who would like to channel the national mood, but cannot yet find a way to do it.

If you were feeling charitable, you might assume that the party and its leader were simply biding their time, waiting for the right moment to spell out their vision. But Labour insiders talk of Starmer and his people being “not political” and having little or no “analysis about where they ultimately want to get to”. Perhaps the unwieldy shopping list of ideas that played some role in the epic defeat of 2019 has spawned a strange mistrust of any ideas; maybe the Labour leader and his senior colleagues are the kind of rather bloodless politicians who are more comfortable with small items of debate than anything transformative.

Yet the coronavirus pandemic has exposed vast social and economic injustices, making inequality more than ever a matter of life and death. All told, this moment seems to be brimming with what Joe Biden’s inaugural address termed “the cascading crises of our era”. So amid all the talk of a historic global moment, why does Labour seem so small?

There are key themes linked to the Covid crisis that the party leadership should surely be talking about. After a decade of austerity and the accelerated transformation of the benefits system into a deliverer of cruelty and punishment, living in poverty – something that now applies to 23% of the population – has at last been pushed into the national conversation. But this has mostly happened in the wider culture rather than politics, as proved by the inspirational efforts of the footballer Marcus Rashford, and recent stories about those shamefully poor food parcels for schoolchildren. The best Labour has recently done is to highlight the brutality of the government’s plan to end the £20 increase in universal credit – a worthy cause, but tiny compared to the urgent challenge of reinventing the welfare state.

One key reason Britain’s experience of the pandemic has been so awful is bound up with our hollowed-out public services, and longstanding neglect of the fact that people’s health is central to so much beyond the NHS. Housing is a health issue. Childcare is too. So is work, and whether you are so insecure and put-upon that earning has to take priority over your family’s wellbeing.

If there are further pandemics, we have to ensure that survival does not depend on whether you can retreat into your home, or whether precarity and poverty will push you into harm’s way. These matters should surely focus urgent attention on the most basic aspects of how all of us live, and our relationship with the state.

Which brings us to questions of power, and how it is distributed. Beyond devolution to Scotland, Wales and Northern Ireland, this has never been something Labour is terribly comfortable with. To his credit, Starmer has promised a “UK-wide constitutional commission to consider how power, wealth and opportunity can be devolved to the most local level”. But this is a long way from forming any kind of Labour narrative, and the party – as usual – seems incapable of demonstrating how modern power ought to work by opening itself up to outside voices.

Our basic system of government is in crisis, from the Whitehall departments that still lord it over faraway towns and cities, to the profiteering shadow state represented by Serco and all the rest. That the Tory dream of “levelling up” is so far the only political trope that has brought any of this to life is proof of the work Labour has to do. There’s no guarantee the party will rise to the moment.

In education, two cycles of cancelled exams and all that stop-start schooling have highlighted much more than the ineptitude of the education secretary Gavin Williamson. If the key transition point between schooling and adult life now comes at 18, why does the watershed point at which we push young people into exam halls still come two years earlier? Given that that the pandemic seems to have exacerbated a crisis of mental health among children and young people, what does that say about a huge tangle of issues – from the state’s approach to play and recreation, to a curriculum that has often reduced schooling to rote learning?

At the same time, our chaotic, marketised system of higher education has been tested to destruction. To emerge from this crisis and leave these systems unchanged would be a heartbreaking insult to the millions of young people whose lives have been so cruelly interrupted. But again, Labour has so far been largely silent.

As ever, its leadership faces complicated, often contradictory political pressures, and the fact that barely a year has passed since one of the party’s most seismic defeats should put its current travails in perspective. Nonetheless, two questions ought to be nagging at its upper ranks. If mass vaccinations finally contain the virus and the Conservatives start to look capable rather than incompetent, how will Labour present itself as an alternative? And if a moment of crisis, institutional failure and rising despair is not a time to think big, when will be?