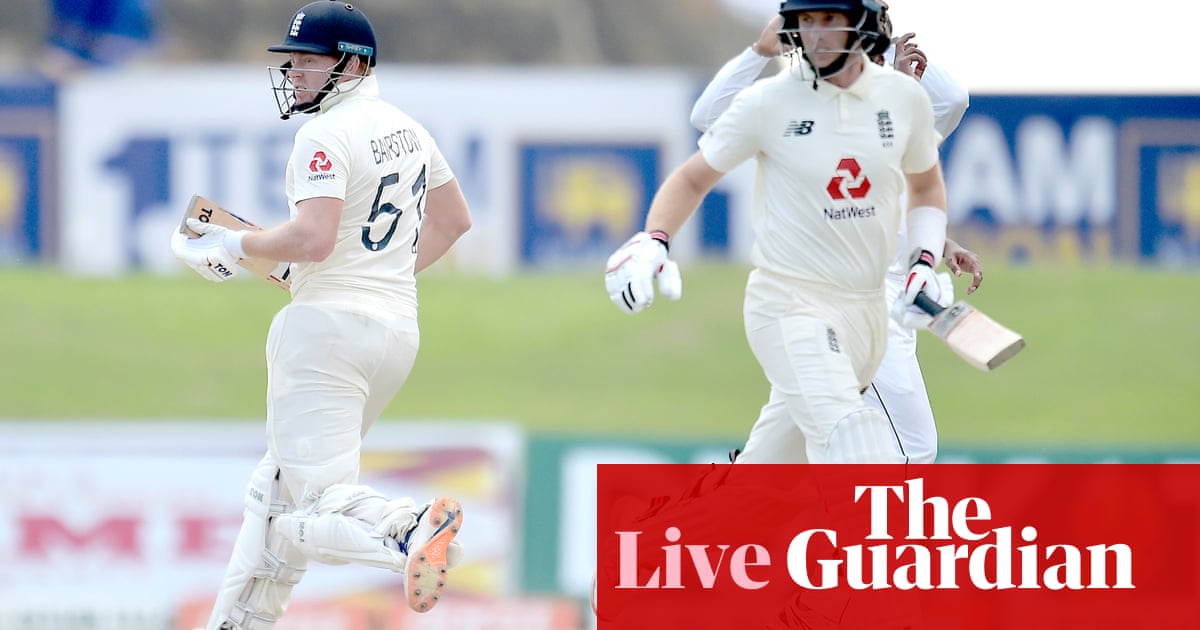 34th over: England 110-2 (Root 74, Bairstow 28) Bairstow dances and wallops Embuldeniya over his head for four. Shot. What a fantastic player of spin. As Nasser Hussain said in his commentary overnight, it does seem a touch odd than YJB won’t be in India for the first two Tests of that series. Of course, it makes sense to carefully manage the three-format players over this hectic winter, but still.

33rd over: England 104-2 (Root 73, Bairstow 24) Root misses another sweep off Dilruwan, his front pad hit and the Sri Lankan fielders up in appeal… turned down. He was well outside the line though, so no review is considered. The hosts have started well here, asking the right questions before Root gets himself re-set.

32nd over: England 104-2 (Root 73, Bairstow 24) Embuldeniya to continue from last night, the man with the wickets so far. He’s tight on it too, eventually getting one to dip at Root, the captain just getting down in time with his sweep. Bairstow to face his first delivery of the day to finish the over and he’s safely in behind it.

31st over: England 103-2 (Root 72, Bairstow 24) Root is immediately using his feet trying to clip the first ball past midwicket as Jerusalem begins up on the fort, sung by England’s one fan, Randy Caddick. Oooh, a sweep and a miss and a boundary. Or not a miss – that was a little underedge, as the TV shows and so signalled. Not really a chance for the wicketkeeper Dickwella but ever so close to the stumps. A better sweep to finish, around the corner for a single to retain the strike.

The players are on the field. Joe Root (67) is preparing to face the first ball, out there with Bairstow (24) to resume their 93-run stand. Dilruwan has the ball. PLAY!

Joe Root is chatting to Mark Butcher. “A really important day. It’s pretty much parity so far. We worked hard in the hot conditions and the important thing is doing the same thing now with the bat. We talk a lot about batting big in the first innings and now we have a chance to do that.” On his own aggressive game against spin. “It felt like conditions changed quickly so I had to find a way to combat that. It was about making sure I could dictate terms rather than the other way around.”

Pitch report. Russell Arnold is doing his thing on TV. “It’s drying up and starting the crumble,” the former Sri Lankan batsman says. “It will turn and bounce.” So, nothing revelatory, then. Looks like another clear and red-hot day in Galle.

Here’s Jimmy last night responding to his 30th five-wicket bag in Tests. Remarkable to think, as my Wisden colleague Yas Rana tweeted, that more than 18 years have passed since Anderson first starting hooping them around for England.

To get into the mood, here’s Tim de Lisle in the paper. He’s looking at rotation; how it is working so far with Anderson and Broad but why it isn’t a cure-all.

Day two at Galle was one where both teams had a couple of times to drive home the advantage and both were able to wriggle off the hook after getting into strife. All told, it leaves honours just about even as we enter morning three, England 98-2 in reply to Sri Lanka’s 381 with Joe Root having already made his way to 67 dreamy runs after he came together with Jonny Bairstow (24) when the score was 5-2.

So far in this series, the visiting skipper has been a cut above all comers with the blade, using his dazzling feet to deal with the home side’s spinners, be in in defence or in attack. He did plenty of the latter before the close last night, already striking ten boundaries. It’s difficult to think of a time when he’s looked so in control as a batsman since assuming the armband nearly four years ago.

A neat statistical quirk thrown up in this brief tour is that Embuldeniya has picked up both of England’s openers, Dom Sibley and Zac Crawley, in all three innings for single-figure scores. And of course, that only goes to reinforce how impressive Root has been, always walking in before he’s had a chance to enjoy a cuppa.

Right, if you’re up early (or staying up late) grab a drink and something to eat and settle in as we ready ourselves. Drop me a line, or ping me a tweet, at any time.