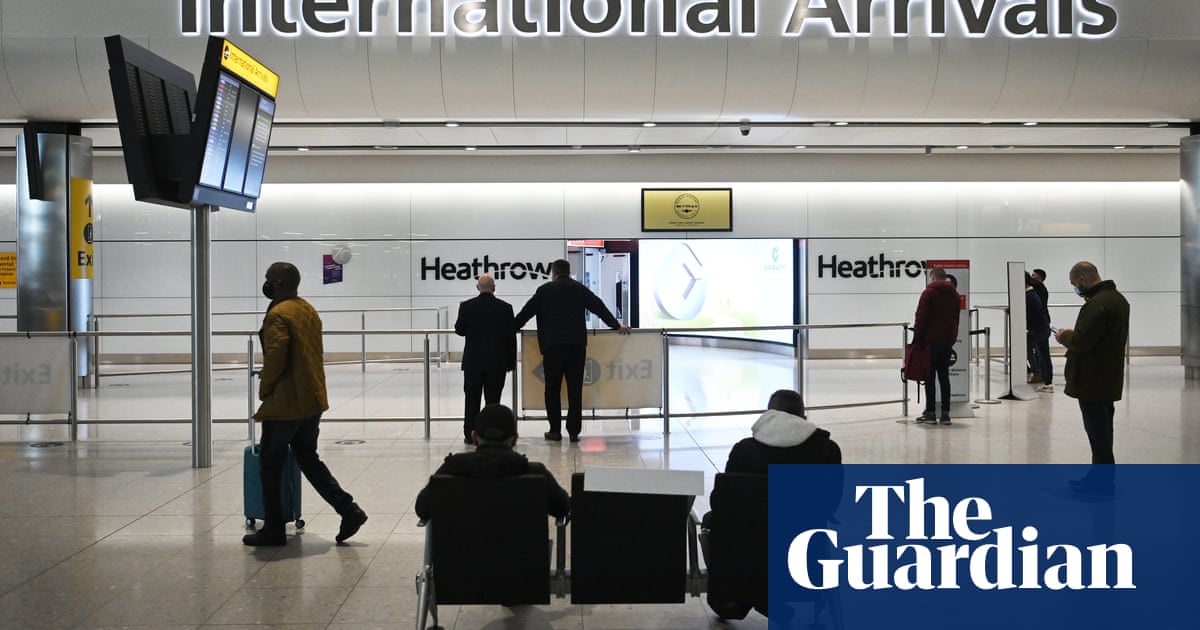 Boris Johnson is facing increasing pressure from cabinet ministers and scientists to impose blanket border control measures against Covid instead of his preferred option of a targeted approach as experts warned that this may not protect the UK from importing further mutations.

Ministers are to meet on Tuesday to weigh up the merits of a border policy which could require all new arrivals, including British citizens, to quarantine at their own expense in government-supervised hotels.

Johnson is said to favour a more targeted approach which would only require travellers from high-risk countries, like Brazil or South Africa, to stay in quarantine hotels.

The health secretary, Matt Hancock, and the home secretary, Priti Patel, are said to be arguing for stricter measures, backed by some scientists on the government Scientific Advisory Committee for Emergencies (Sage). Downing Street has said both options remain under consideration and a source said the debate was still “live” about the best approach.

Patel, who has openly said she was among those who wanted to close the borders at the height of the first wave of the pandemic in March, is among ministers making the case for the need to “act decisively” in order to protect the advances the UK has made in its vaccination drives.

“Anyone who slips through could be a new mutant strain, hence the need for blanket measures,” one Home Office source said.

Hancock said he was concerned about unknown variants coming into the UK, saying both Brazil and South Africa had “decent-sized” genomic sequencing programmes but other countries did not

“The new variant I really worry about is the one that is out there that hasn’t been spotted,” he told Sky News. “There’s probably those elsewhere that simply haven’t been picked up because the country doesn’t have that genomic sequencing service.”

Travellers to Britain are already required to self-isolate for 10 days, or five with a negative test, but enforcement has been patchy.

Those arriving in the UK, apart from children, hauliers and travel crew, must test negative for Covid in the 72 hours prior to arrival in order to be allowed entry and anyone arriving without a negative test faces a fine of up to £500.

The UK has been criticised for its decision not to put in place tougher border restrictions at the beginning of the pandemic.

Hancock emphasised in his interviews that the situation was particularly acute now given the vaccine programme.

“That’s why the conversation has changed about the borders. It’s not just about protecting Britain from countries abroad where there’s a high degree of spread – not least because there are very high levels of coronavirus here in the UK right now – it’s that these new variants can really set us back and we need to protect ourselves against them coming in.”

Prof Kamlesh Khunti, professor of primary care diabetes and vascular medicine at the University of Leicester, who sits on both Sage and the Independent Sage group of experts, said variants could “appear anywhere” and the border policy should reflect that.

“We should therefore have a blanket policy on border control, otherwise people may be traveling from high-risk countries to low-risk countries and then to the UK in which case we will miss these cases,” he said. “Giving this clear recommendation also gives less risk of confusion as the risk in various countries will change over time.”

Gabriel Scally, visiting professor of public health at the University of Bristol and a member of the Independent Sage group of experts, also supported the use of hotels for managed isolation of travellers and said the policy would need to apply to all those entering the country.

“If you apply it to some countries then people will just go via a third country and give you potentially accurate but misleading information on their passenger location form,” he said.

Prof Susan Michie, a member of the government’s Covid-19 behavioural science team, a subgroup of Sage, also agreed that the policy should be applied to those entering from all countries.

“It is generally recognised that not controlling borders earlier has been one of the weaknesses of the government’s Covid19 strategy,” she said. “We only know about variants in countries where there has been genomic sequencing so a blanket approach at this point of crisis would seem to be sensible.”

Dr Michael Head, senior research fellow in global health at the University of Southampton, said: “Quarantine for all arrivals into the UK should have been introduced since the first wave, and should certainly be in place right now. It’s difficult to appropriately discern the risks between different countries, so a blanket policy is a better idea.”

Prof Andrew Hayward, director of UCL’s Institute of Epidemiology and Health Care, also agreed that the blanket approach would be safest. “Obviously, this would have major economic and social consequences, especially if used as a long-term strategy to prevent the importation of new variants,” he said.

However, Hayward said it was important to note that there was not yet any evidence of strains escaping vaccine-induced immunity. “The likely scenario in the future is that there will need to be global surveillance of coronavirus strains and the extent to which they may evade vaccine related immunity and regular update of the vaccine components to account for this,” he said. “This is exactly the model used in flu.

“In the meantime, tightening border controls whilst we gain a better understanding of emerging variants is prudent and the short-term economic costs may be greatly outweighed by the future gains.”