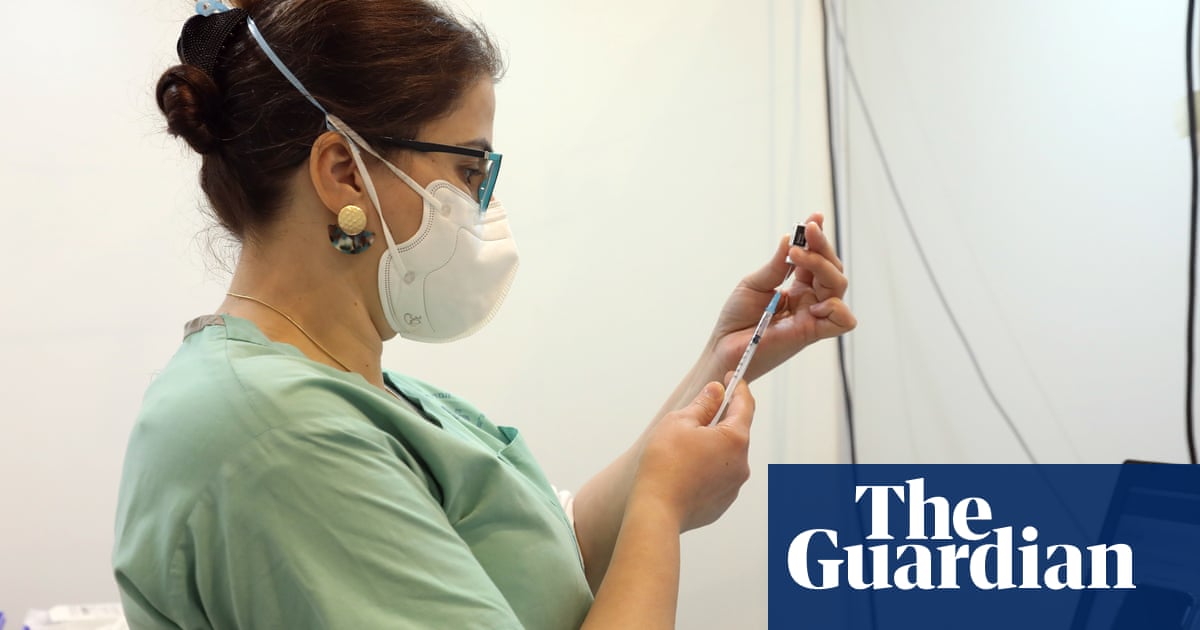 Israel’s coronavirus tsar has warned that a single dose of the Pfizer/BioNtech vaccine may be providing less protection than originally hoped, as the country reported a record 10,000 new Covid infections on Monday.

In remarks reported by Army Radio, Nachman Ash said a single dose appeared “less effective than we had thought”, and also lower than Pfizer had suggested.

By contrast, those who had received their second dose of the Pfizer vaccine had a six- to 12-fold increase in antibodies, according to data released by Sheba Medical Center in Tel Hashomer on Monday.

The issue of some vaccines being less effective after a single dose rather than two is well known, as well as the fact that protection is not immediate. While the first dose can take several weeks to promote an effective antibody response, the second dose can trigger different responses, supercharging the protection. Pfizer itself says a single dose of its vaccine is about 52% effective. Some countries such as the UK have delayed administering their second doses to try to maximise the number of people given a first dose.

Questions over the effectiveness of the vaccine were raised amid reports that thousands of Israelis were still becoming sick after receiving the vaccine, although the public health services head, Sharon Alroy-Preis, said that in most cases this was because the individuals had not built up sufficient antibodies after being inoculated before being exposed to the virus.

The latest figures for Israel, which had become the country to roll out one of the fastest national vaccine efforts, underscore the huge challenges still being faced around the globe even in countries with aggressive vaccine programmes.

Already more than 2 million Israelis have had their first Pfizer shot, while 400,000 have had a second.

Amid warnings that 30% to40% of the new infections were being driven by the new Covid-19 variant first identified in the UK, the Israeli cabinet was meeting on Tuesday to consider tightening existing restrictions even further. Some analysts, however, have put the prevalence of the new variant lower.

The cabinet had been warned by Ash that the new variant was set to become the main source of infections in Israel within weeks.

The new concern follows the release of new data on Monday by Israel’s health ministry recording 10,021 infections the previous day, with a positivity rate above the 10% mark for the first time in over three months, suggesting widespread community transmission.

The rates of infection have undercut the sense of optimism that the Israeli prime minister, Benjamin Netanyahu, has tried to project around Israel’s vaccination campaign, for which he has taken credit.

Opening the cabinet meeting on Tuesday, Netanyahu said: “We are in a tight race between the vaccination campaign and the high infection rates in the world due to the mutation,” calling for a “last ditch effort” against the virus.

Israel is currently in the midst of a third lockdown, due to end on Thursday. Other measures under consideration include closing the Ben Gurion international airport to all except essential flights.

The rise in new cases has provoked a round of finger pointing, not least at lax policing of the Ultra-Orthodox community, where some schools have remained open and there have been large gatherings, including a wedding in Bnai Brak on Monday, described as “scandalous”, which drew 300 guests before being raided by police.

Describing the impact of the new coronavirus variant, Alroy-Preis told Kan radio that the new variant appears to be having a significant impact in infections in the Ultra-Orthodox community.

“We’re seeing very significant and rapid infections and it’s really a race between this and the vaccine,” said Alroy-Preis, who described the case of one person recently returned from the UK who infected 20 to 30 people.