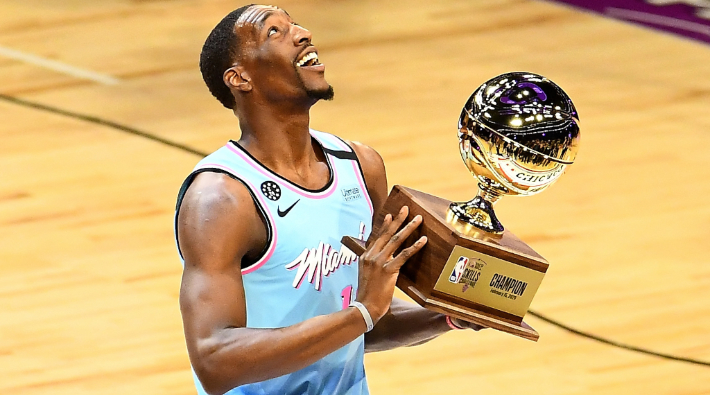 After an awesome run through the NBA postseason as he shifted to center for the Miami Heat and unlocked new possibilities for them on both ends, Bam Adebayo is setting his sights higher.

In a media week press conference on Friday, Adebayo was asked about a phenomenon that happens for great players in the league in which other players suddenly want to model their game after the star’s. Surely after the run he just finished in the Bubble, young bigs will be looking to Adebayo for ways to grow their game.

Bam Adebayo, on others seeking to model their games off his, “It just shows respect for my game. I feel like I’m trying to change basketball.”

Bam likes the nickname the Heat has given him: “No Ceiling.” He said he wants to be remembered as one of top 5 centers or PFs of all time and wants to “keep changing basketball,” noting it’s rare for a big man to be able to guard 1 through 5 and run an offense.

As one of the Heat’s offensive initiators as well as their do-it-all defensive anchor, Adebayo has a hugely important role in Miami on both sides of the ball. There simply aren’t many players who have as much responsibility as he does, and he’s managed to shoulder that load in such a way that Miami was able to make a run to the NBA Finals.

Should more Adebayos spring up, it would certainly represent a sea change in the NBA, but the better bet might be that as others try to copy him, what we really learn about Adebayo is how unique he really is. The big man has few matches in the league, even if some claim to see themselves in him.