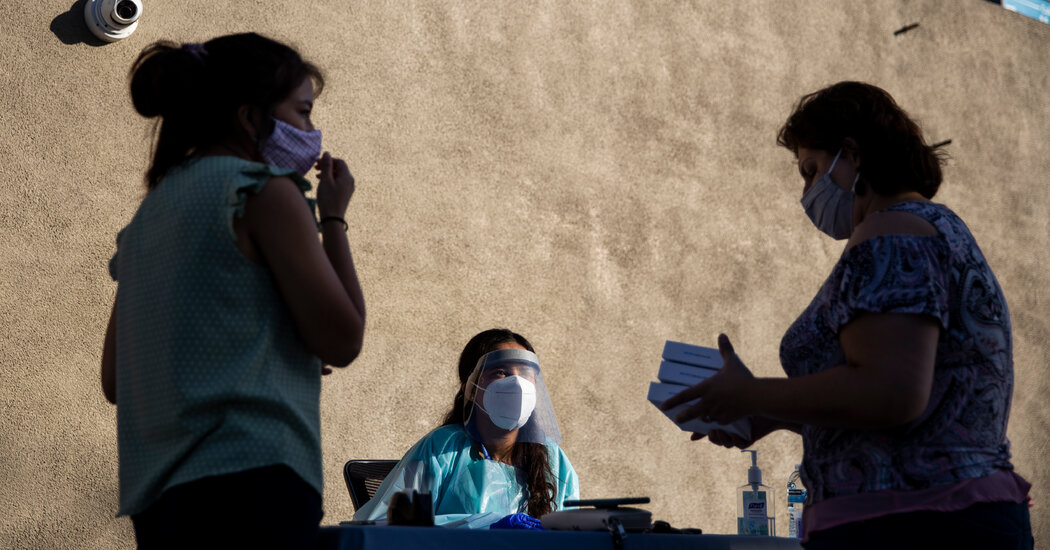 In Orange County, the rate of new coronavirus cases has tripled over the past two weeks.

While upscale coastal cities, like Newport Beach, have had relatively few cases, inland cities, like Santa Ana and Anaheim, account for a disproportionately high share of infections, hospitalizations and deaths, and the initial at-home tests are being targeted there.

“The inability of some residents, who lack means, to work remotely or quarantine appropriately has led to a disparity in infection rates between communities,” said Andrew Do, vice chairman of the county’s board of supervisors.

“Our challenge will be to get the message out: This is how you protect loved ones, and we’ll be able to go back to businesses and interacting with each other.”

Unlike Orange County’s nose-swab testing program, which has targeted people with coronavirus symptoms, the in-home saliva effort is intended to widen testing to include people who might not be suffering from any symptoms.

In the initial phase, the county has partnered with five community clinics to distribute 11,000 testing kits. The test was developed by Ambry Genetics, a local company with expertise in genetic diseases that has converted part of its lab to produce the tests.

“Our test is literally, you spit up to a point in the tube, seal the cap and mail it in,” said Aaron Elliott, the company’s chief executive officer, who compared it to consumer genetics tests like those from AncestryDNA. “It’s much easier than tickling your brain with a nasal swab.”

The county plans to open the saliva home-testing program to the entire county as Ambry Genetics ramps up production. “We’re hoping this will be a game-changer in a lot of ways,” said Doug Chaffee, a county supervisor who represents a part of Anaheim that is heavily Hispanic.