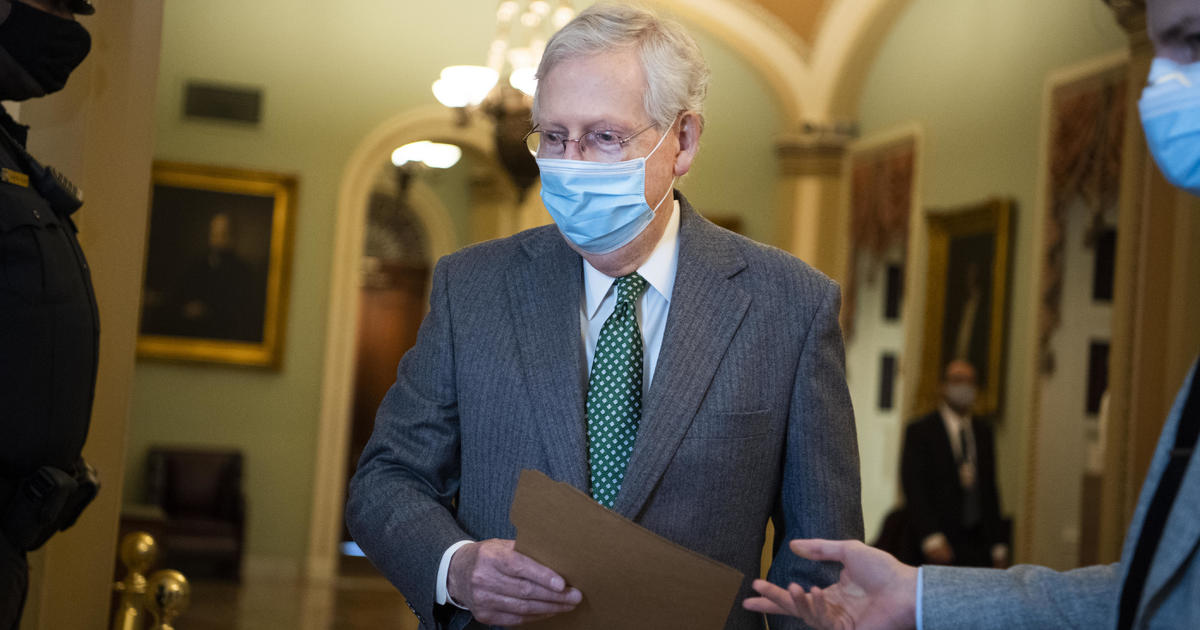 Washington — Senate Majority Leader Mitch McConnell said on Thursday that he sees “hopeful signs” for a deal on coronavirus relief legislation, but he continued to tout his own targeted proposal while not endorsing a larger framework reached by a bipartisan group of lawmakers. Although McConnell said that compromise was “within reach,” he argued that Congress should pass his legislation and then continue negotiations.

In a speech on the Senate floor, McConnell noted that his roughly $500 billion proposal would likely garner support from President Trump. Treasury Secretary Steven Mnuchin told reporters on Wednesday that Mr. Trump was willing to sign McConnell’s proposal into law. McConnell introduced his plan on Monday, but it is very similar to legislation he had previously proposed that was blocked twice by Senate Democrats who argued that it did not go far enough to aid struggling Americans.

“Here in the Senate, I put forward a serious and highly targeted relief proposal including the elements which we know the president is ready and willing to sign into law. Why should these impactful and noncontroversial life preservers be delayed one second longer?” McConnell said.

McConnell’s proposal includes funding for testing, schools and small businesses, as well as a provision on liability protections. However, it does not include another round of stimulus checks, a restoration of a popular unemployment benefit or funding for state and local governments.

“Compromise is within reach. We know where we agree. We can do this,” McConnell said.

In a speech on the Senate floor just a few moments later, Senate Minority Leader Chuck Schumer slammed McConnell, saying the majority leader was arguing “that the Senate should pass only what Republicans approve of and leave the rest for later.” He criticized McConnell for appearing to be unwilling to consider the $908 billion proposal proposed by a bipartisan, bicameral group of lawmakers earlier this week. Schumer and Speaker Nancy Pelosi said Wednesday that they believe this proposal should be a framework for any future negotiations.

“Of course, we and others will offer improvements, but the need to act is urgent, and we believe that with good faith negotiations we could very well come to an agreement,” Schumer said, adding that other members of Congress could look at the proposal by the bipartisan group and “build off their momentum.”

Schumer criticized McConnell for saying that Congress should only pass legislation Mr. Trump would sign, noting that Democrats have control of the House.

“Once again, the Republican leader argued that the Senate should pass only what Republicans approve of, and leave the rest for later. And he now says that an emergency relief bill should be limited by only what President Trump will sign. Of course, we could say similarly, the bill should be limited to only what a Democratic House will pass. Neither is true compromise. The leader knows that,” Schumer said, reiterating that any negotiations should begin with the bipartisan proposal as a starting point.

A spokesperson for Pelosi said later on Thursday that the two had spoken that day about their “shared commitment to completing an omnibus and COVID relief as soon as possible.”

The bipartisan proposal would provide state and local governments with $160 billion and small businesses with $288 billion, including through the Paycheck Protection Program. It also allocates $82 billion for education and $16 billion for vaccine development and distribution, as well as testing and contact tracing.

For Americans out of work, the measure sets aside $180 billion for additional unemployment insurance, but doesn’t include a new round of stimulus checks. The plan also provides short-term liability protection from coronavirus-related lawsuits, a priority of McConnell.