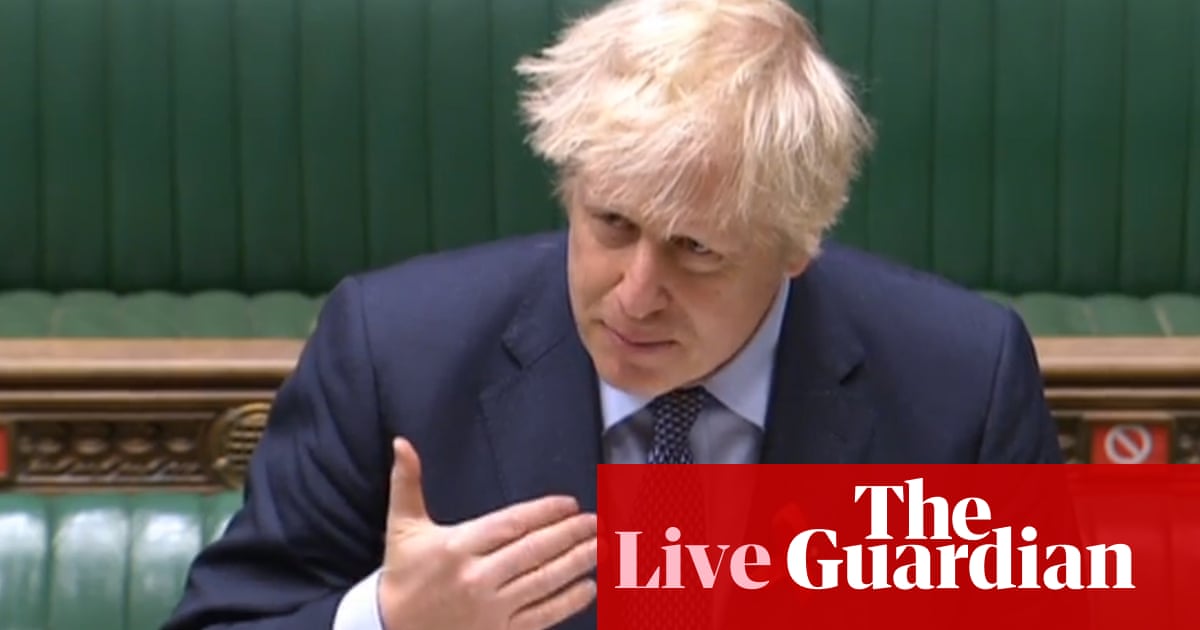 Mark Harper, chair of the Covid Recovery Group of Tory MPs, says the government has not provided evidence to justify these measures. In particular, he says it has not shown why the hospitality industry is assumed to pose a greater risk.

He will vote against the regulations tonight, he says. In future, he says, the government should trust MPs more, and share its evidence with them. He implies that if that were to happen, he would be more supportive in the future.

Sammy Wilson (DUP) says he is concerned about these restrictions because he thinks measures in England get copied in Northern Ireland. He will accept restrictions if there is a reason for them, but he says he has not been persuaded that these are justified. And he says that, although the media highlight the deaths from coronavirus, they do not report the non-Covid deaths that might occur as a result of lockdown measures being in place.

Sir Desmond Swayne (Con) says using “immunity passports” to encourage people to get vaccinate would be wrong. And it could be counter-productive, he says.

Steve Baker (Con) intervenes, and says the government should also avoid implict coercion. It should not allow businesses or airlines to discriminate against people who have not been vaccinated.

Swayne agrees. That would be “vaccinationism”, he says.

He says the government also needs to avoid the danger of becoming “the most authoritarian since the Commonwealth of the 1650s”. But Labour would be worse, he claims.

Emma Lewell-Buck (Lab) says she will be voting against the new restrictions because she has not seen the evidence to justify them and she thinks they will harm her constituents.

A backlash against the Welsh government’s decision to ban the sale of alcohol in pubs from Friday is growing.

The Tories in Wales have called for a vote on the move before the come into force and have formally requested an urgent debate.

Adam Price, the leader of Plaid Cymru, called for a “sensible compromise” suggesting cafes, bars and pubs should be allowed to serve a limited amount of alcohol to a limited number of people and shut earlier than usual. Price said:

The hospitality sector’s backlash to these latest restrictions is understandable. Public trust is being eroded because people don’t understand the logic. How can four people from four different households having coffee together be safer than two people from the same household having a pint?

Wales’ biggest brewery, Brains, has told the BBC it will close more than 100 managed staff from Friday and furlough staff. Chief executive Alistair Darby said there was “an awful stench of totalitarianism” surrounding the new rules.

Sir Ed Davey, the Lib Dem leader, says his party will not support the government today because the prime minister has failed to provide evidence to justify his plans and failed to engage with local authorities. The government’s plans are “arbitrary, confusing and chaotic”, he says.

Adam Holloway (Con) says the Tory Covid Recovery Group does not want to let the virus rip. They just want to see evidence to justify the restrictions, he says.

He says he would rather see his constituents socialising in a Covid-secure pub than in a private home.

He says he does not understand why the government is not using the capacity in the Nightingale hospitals.

Labour’s Angela Eagle intervenes to say the Nightingale hospitals are not being used because staff are not available.

Holloway says that is the sort of thing the government should be investing in.

He says he will support the government tonight. But he warns that in future he might not if restrictions are not eased.

This is what Boris Johnson said earlier in the debate about the possibility of tiering decisions becoming more localised in the future. He said:

As we go forward … the government will look at how we can reflect as closely as possible the reality of what is happening on the ground for local people, looking at the incidence of the disease, looking at the human geography and spread of the pandemic, and indeed the progress that areas are making in getting the virus down.

We will try to be as sensitive as possible to local effort and to local achievement in bringing the pandemic under control.

As Damian Green revealed a few minutes ago (see 2.18pm), this appealed to Conservative MPs.

Damian Green, the Conservative former cabinet minister, says he cannot support the government in this vote.

Of course he supports restrictions, he says. But he says the new system needs public support. Without that, people will not follow the rules.

He says last week he asked the prime minister why the public should obey rules they considered stupid. And today people are arguing what size a scotch egg needs to be to count as a meal. He says he rests his case.

He welcomes what the prime minister said earlier about decisions becoming more localised (see 1.04pm), and he says he hopes this is implemented.

These plans don’t have public support, so he will vote against them, he says.

Andrea Leadsom, the Conservative former cabinet minister, says the document published by the government did not provide a proper justification for the rules.

She says the rules do not seem fair or logical. A constituent asked why her husband could work in a closed space with a group of other workers, while she was unable to see her daughter at home in a socially distanced way.

I want to support my government and my prime minister in the lobby this evening, but I can’t and won’t inflict deliberate harm on my constituency unless I can see for myself that to do nothing would be worse.

Graham Stringer (Lab) says he will vote against the measures tonight. He says public health works best when it is localised.

These measures will be “extraordinarily damaging” to the economy of Greater Manchester and other places too, he says. And he says it is important to remember that poverty kills.

He says Boris Johnson reportedly vetoed putting London in tier 3, because he was told 500,000 jobs would be at risk. Stringer says this shows the government favours London over Greater Manchester.

He says he will not vote for these measures tonight. He hopes that, when the next vote comes, the measures will be much more localised, with restrictions imposed on a smaller area.

Restrictions on a local authority level, [which is] what we have now, is not enough, we must follow the example of Germany, South Korea and others by having restrictions imposed on a much smaller area.

They work better, they’re fairer and they cause much less economic damage. We don’t know for sure whether blanket lockdowns work to suppress the virus, but what we do know for sure is the economic damage caused by such restrictions, the impact on people’s livelihoods and even their mental health is absolutely clear.

Sir Graham Brady, the chair of the Conservative backbench 1922 Committee, starts by saying that he thinks the PM’s instincts on this are similar to his.

If government is to take away fundamental liberties of the people whom we represent, they must demonstrate beyond question that they’re acting in a way that is both proportionate and absolutely necessary.

Today, I believe the government has failed to make that compelling case. The benefit of the doubt that this house has extended to the Government in March and since is harder to take for granted in December.

He says his constituency, Altrincham and Sale West in Greater Manchester, is in tier 3. But the government has not justified that decision, he says. In the light of that, he will oppose the measures.

Back in the Commons Patrick Grady goes next on behalf of the SNP. He says that these are England-only measures, and so they SNP will not be voting on them. But they have implications for Scotland, he says. Scotland has introduced similar measures, he says, but in Scotland the government has attracted more cross-party support, he says.

He says people do not want “bluster and false hope” from leaders. They want honesty.

School attendance in England has improved slightly, according to official government data, but one in five secondary school children are still absent and a third of schools have one or more children self-isolating.

Overall attendance last week remained at 83%, with a very slight increase in primary schools in England (88% up from 87%). The proportion of secondary schools reporting one or more pupils self isolating remained high at 68%, though this was an improvement on last week’s figure of 73%.

Headteachers warned that Covid was continuing to cause widescale disruption in schools and called for a move to partial or full remote learning in the last week of term before Christmas to enable pupils and staff to enjoy the holiday break.

Geoff Barton, general secretary of the Association of School and College Leaders, said:

The health secretary yesterday said the national lockdown had helped to bring coronavirus back under control. It will not feel like that in many schools which continue to operate under very difficult circumstances because of the impact of the pandemic.

We are particularly concerned about the final week of term when any positive cases will result in many children and staff having to self-isolate over Christmas in line with Covid protocols.

We are pressing the government to allow schools to move to partial or full remote learning during that week if they feel this would help address the situation. Parents, children, and school staff surely deserve this small degree of flexibility from the government at the end of an extremely stressful term.

Commenting on the latest figures, a Department for Education spokesperson said: “It is a national priority to keep education settings open full-time, which is supported by the chief medical officer, who has highlighted the damage caused by not being in education to children’s learning, development and mental health.

Sir Bernard Jenkin (Con) starts his speech by saying Labour does not have a plan. Chris Bryant (Lab) intervenes to say it is clear there will have to be a third lockdown in January.

Starmer says, again, that the government is on plan five, “and this one’s full of holes”.

Starmer says he accepts that, when the scheme was set up in a hurry in March, it was understandable people were overlooked.

But eight months later the problem should have been addressed, he says.

Starmer says the PM does not understand how much anger there is about the lack of support for businesses.

There have been six economic plans in eight months, he says.

The additional restrictions grant gives a flat figure to firms affected by the lockdown, he says. He says Greater Manchester, which was under restrictions for 40 days, got the same as the Isle of Wight.

And areas were getting the same regardless of how many businesses they have.

Some businesses are now getting less support than during the first wave, he says.

Starmer says millions of self-employed people are excluded from the support scheme. Yet every time he raises this, he says, the PM only talks about people who are covered by the scheme.