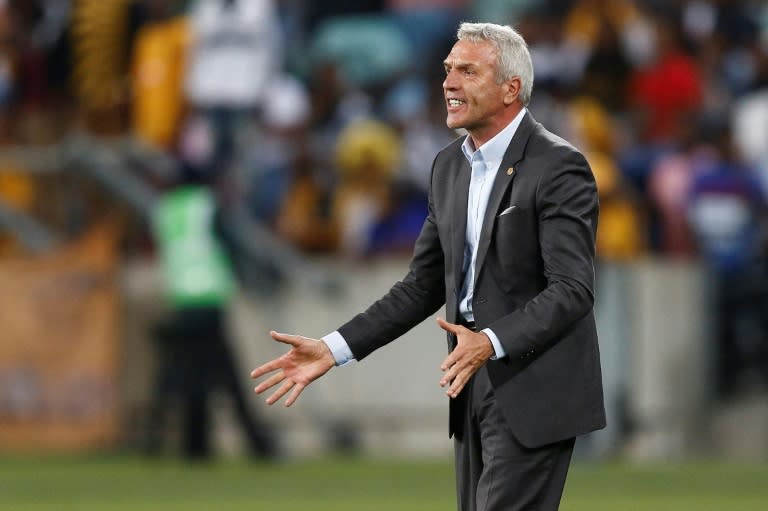 Al Ahly coach Pitso Mosimane has reacted to a 2-1 victory over arch rivals Zamalek in the CAF Champions League final by tweeting “I had to come to the Nile River to catch the big fish”.

He won the competition once in six attempts with previous club Mamelodi Sundowns of South Africa, but needed only two months to guide Ahly to a record-extending ninth title in the all-Egyptian clash.

Mosimane joined Ahly in September after Swiss coach Rene Weiler could not agree terms for a renewal of a one-year contract.

Here, AFP Sport rounds up football news from around Africa.

Both Mosimane successes came against Zamalek, with Sundowns in 2016 and with Ahly this weekend as Mohamed ‘Afsha’ Magdy scored a spectacular winner five minutes from time behind closed doors in Cairo.

Fullone won back-to-back titles with ASEC Mimosas of the Ivory Coast and Raja Casablanca of Morocco in 1998 and 1999 and El Gohary masterminded the 1982 and 1993 victories of Ahly and Zamalek respectively.

Former AshantiGold of Ghana captain and forward Shafiu Mumuni has joined US Monastir of Tunisia on a two-year contract.

He will replace compatriot Anthony Okpotu at the club that lifted the Tunisian Cup for the first time recently by shocking four-time African champions Esperance.

The 25-year-old began his professional career with Wassaman United in 2011 and moved to AshantiGold one year later.

Cabten Bashir scored after only 12 minutes to give Al Amal Atbara of Sudan a 1-0 home victory over KVZ of Zanzibar in a CAF Confederation Cup preliminary round first leg.

The Sudanese dominated the match in Omdurman only to be let down by poor finishing ahead of the return match in the Indian Ocean island next weekend.

Atbara and KVZ are both making second appearances in the African equivalent of the UEFA Europa League having previously suffered preliminary round losses.

The 62-year-old German takes over the bottom club next week after quitting Ethiopian club Saint George just one month into a three-year contract.

Middendorp succeeds Eric Tinkler, the former South Africa midfielder who was fired after a disastrous start to the season.

Debutants US Monastir scored in each half to defeat Fasil Kenema of Ethiopia 2-0 in the first leg of a Confederation Cup preliminary round tie.

Ali al Omari netted after only three minutes for the north Africans in Monastir and Fahmi Ben Ramadan doubled the lead 12 minutes into the second half.

Kenema, who are making a second successive appearance in the competition, impressed during the first half and were unlucky to trail at half-time.

CI Kamsar of Guinea were held 0-0 at home by Renaissance of Chad in a Confederation Cup preliminary round first leg in Conakry.

The Guineans had been expected to build an aggregate lead as they seek to emulate compatriots Horoya, who reached the semi-finals of the second-tier African club competition last season.

Renaissance host the return match in N’Djamena next weekend hoping to achieve a rare Chadian victory in a CAF club competition.

The deal is reportedly worth 140,000 euros ($165,000) and comes two months before his contract with the Ghanaian club expires and he would become a free agent.

Berkane are based in the citrus fruit-producing northeast of Morocco and are popularly known as the ‘Orange Boys’.