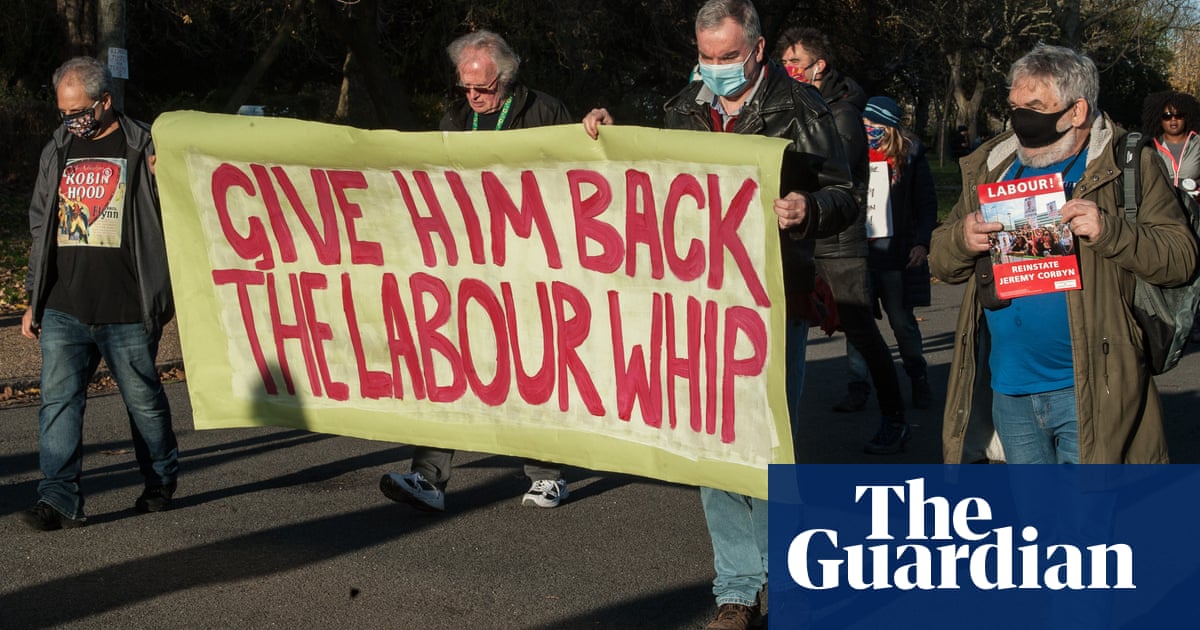 Labour’s general secretary has barred MPs and party members from discussing Jeremy Corbyn’s suspension, voicing solidarity with him or criticising the equalities watchdog report on antisemitism in the party, claiming it could make local meetings unwelcoming for Jewish members.

The move by David Evans, which has been criticised by Momentum as an attempt to stifle debate, will mean any local party that seeks to discuss Keir Starmer’s decision to remove the whip from Corbyn will be ruled out of order.

Corbyn was suspended from the party after saying the scale of the problem investigated by the Equalities and Human Rights Commission had been “dramatically overstated for political reasons” by opponents and the media. He has since issued a clarifying statement saying it was not his intention to “tolerate antisemitism or belittle concerns about it”, and been readmitted to the party with a warning. However, Starmer has suspended the Labour whip for at least three months, requiring Corbyn to make a formal apology.

Research by the grassroots pro-Corbyn group Momentum found that 36 of the more than 600 constituency Labour parties (CLPs), including the first to nominate Keir Starmer for the Labour leadership, have passed motions in support of the former Labour leader in the past week. A further 16 constituency Labour parties have had their motions in support of Corbyn ruled out of order, according to Momentum.

The group described the guidance as “yet another disturbing attack on the rights of members to democratically discuss matters vital to the party”.

It claimed in a Twitter thread: “The cynical misuse of rules designed to protect against discrimination in order to prevent discussion of what is a factional attack against Jeremy Corbyn is outrageous and trivialises the fight against racism. It is a grossly irresponsible move that purposefully confuses the fight against antisemitism with a fight against the left and risks tarring Labour members who disagree with the leadership as racists.”

In his letter to CLP chairs and MPs, Evans wrote that motions questioning the EHRC’s finding were “not competent business for branches or CLPs” and said that also applied to “motions relating to ongoing disciplinary cases”.

“I am aware that other motions (including expressions of solidarity, and matters relating to the internal processes of the PLP) are providing a flashpoint for the expression of views that undermine the Labour party’s ability to provide a safe and welcoming space for all members, in particular our Jewish members,” Evans wrote. “Therefore, all motions which touch on these issues will also be ruled out of order.”

He added: “Please rest assured that when I took up post as general secretary I had no desire at all to hamper discussion by our local parties, but until we can improve our culture, such restrictions may be required to stay in place.”

A internal memo about the new rule, sent by Labour’s head of internal governance, Fraser Welsh, to regional secretaries, said: “As we have previously advised we will not hesitate to take appropriate action – including against individual members – where our rules and guidance are not adhered to, or standards of behaviour fall below that which we expect.”

Among those who passed a statement drafted by a separate Labour left group, the Campaign for Labour Party Democracy, was Richmond Park, the first CLP to nominate Starmer for the leadership.

The circulated motion of solidarity said: “Jeremy is a lifelong campaigner against racism and antisemitism. We believe that unity, not division, is important for the party to make progress and effectively challenge racism, fascism, antisemitism and harassment in what ever form this may take.”

A spokesperson for the Campaign for Labour Party Democracy, which drafted the motions being passed by local parties, said the advice “suggests the leadership are ignoring the valid concerns of party members and doubling down in its attacks on political discussion.

“This will only exacerbate the anger and frustration of members who would like to focus on fighting the Tories but are not prepared to see their former leader trashed and their rights to political discussion curtailed.”