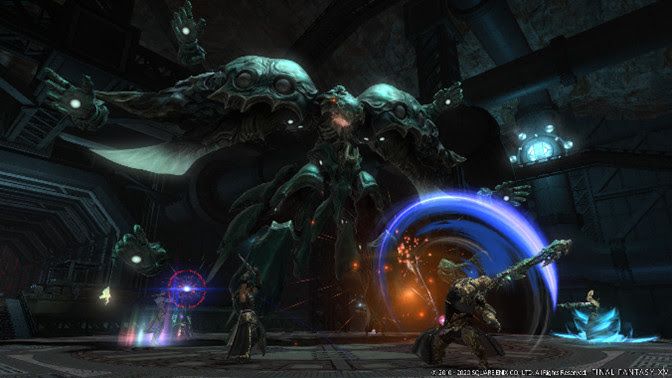 The latest update for Final Fantasy XIV: Shadowbringers will release on December 8. Patch 5.4 is named ‘Futures Rewritten’ and follows on from the main campaign’s finale, bringing new scenario quests for the Scions and a raid dungeon called Eden’s Promise.

The latter is playable on both normal and savage difficulties, continues the story of Ryne and Gaia, and among other things will include a new boss designed by series veteran Tetsuya Nomura. Another mission chain will see players discover the existence of and then hunt down another series mainstay, the Emerald Weapon.

Futures Rewritten also includes the next chapter of ‘Save the Queen’, a questline from the renowned Yasumi Matsuno, and introduces a mode with a very Square Enix name: Delubrum Reginae. What this means, it says here, is “new large-scale battle content with both a 24-player normal mode and high-difficulty 48-player savage mode.”

There are other new dungeons and high-level bosses, but perhaps the most substantial change is the addition of ‘explorer mode’, a dedicated screenshot mode for dungeons that allows players to stroll about without enemies. Players will also be able to summon mounts and minions to pose for their screens.

The press release also has this nugget: “Playable instruments have been expanded to include the violin.”

Alongside these additions are a slew of tweaks and balance adjustments to jobs (including a higher level cap for Blue Mages), the in-game card game Triple Triad (such as the ability to create custom tournaments for eight players), and Doman Mahjong quick matches. Now that’s what I’ve been missing.

In case you didn’t know, Final Fantasy XXIV is one of the best MMOs out there, and last year’s Shadowbringers not only won PCG’s best expansion of the year award but scored a whopping 94% in our review. If you’re interested in checking it out the game comes with a generous free trial period, and here’s our guide for how to take those first steps.