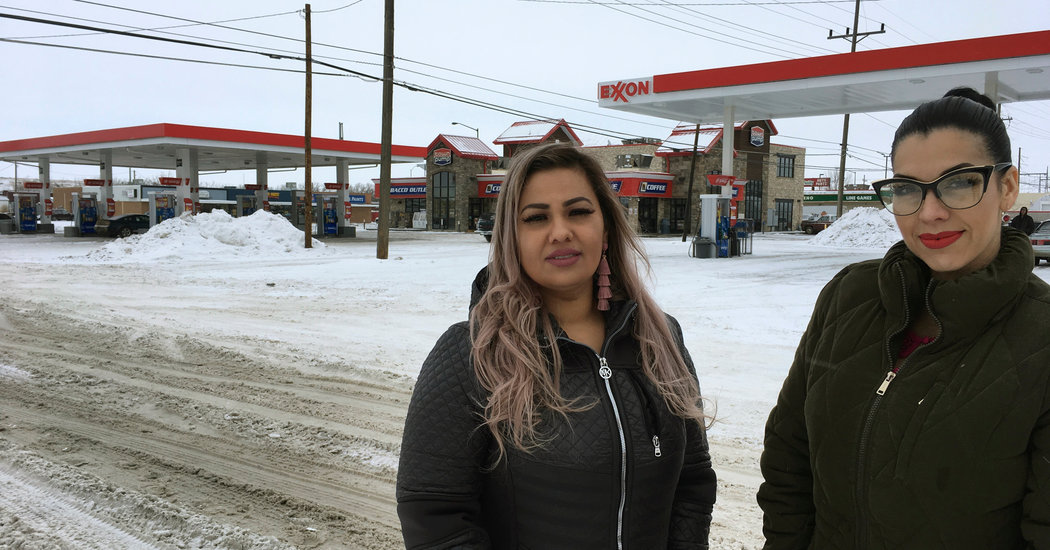 Two women who were detained in a small town in Montana after a Border Patrol agent heard them speaking Spanish at a convenience store have settled for an undisclosed amount after filing a lawsuit against U.S. Customs and Border Protection, the A.C.L.U. of Montana said on Tuesday.

The women, Ana Suda and Martha Hernandez, were detained for about 40 minutes on May 16, 2018, after a border patrol agent overheard them speaking Spanish while they were waiting in line to purchase milk and eggs at a Town Pump convenience store in Havre, Mont., a city of close to 10,000 about 35 miles south of the Canadian border.

While standing behind the two women in line, the Border Patrol agent, Paul O’Neill, was greeted by Ms. Hernandez. He commented on her accent and asked the women where they were from. After they answered that they were from Texas and California, Mr. O’Neill asked for their identification and the two women gave him their valid state-issued driver’s licenses.

In a video of the encounter filmed by the women, one of them asked why Mr. O’Neill had requested identification.

“The reason I asked you for your ID,” Mr. O’Neill replied, “is because I came in here and I saw that you guys are speaking Spanish which is very unheard-of up here.”

Other Border Patrol agents soon arrived, along with Mr. O’Neill’s supervisor, according to the lawsuit. Ms. Suda asked the supervisor if she and Ms. Hernandez would have been detained if they had been speaking French. “No,” he responded, “we don’t do that.”

In 2019, the A.C.L.U. filed a lawsuit on the women’s behalf, alleging that a Border Patrol agent had singled them out for speaking Spanish and had relied on that as a “proxy for race.” Lawyers representing Ms. Suda and Ms. Hernandez also said the detention violated the Fourth Amendment and the women’s right to equal protection.

Since the incident, Ms. Suda and Ms. Hernandez have moved from Havre for fear of their families’ safety and because of “local backlash,” said Caitlin Borgmann, executive director of the A.C.L.U of Montana.

Lawyers who represented Mr. O’Neill did not respond to requests for comment.

In a statement, U.S. Customs and Border Protection said the settlement did not mean it had been held liable for the incident. Border Patrol agents “are trained to enforce U.S. laws uniformly and fairly, and they do not discriminate based on religion, race, ethnicity or sexual orientation,” the agency said.

“C.B.P. is committed to the fair, impartial and respectful treatment of all members of the trade and traveling public, and has memorialized its commitment to nondiscrimination in existing policies,” the agency said.

In a statement released through the A.C.L.U., Ms. Suda said she hoped the encounter pushes U.S. Customs and Border Protection to reassess its conduct.

“We stood up to the government because speaking Spanish is not a reason to be racially profiled and harassed. I am proud to be bilingual, and I hope that as a result of this case C.B.P. takes a hard look at its policies and practices,” Ms. Suda said. “No one else should ever have to go through this again.”

This was not the first time she and Ms. Hernandez were the subject of border patrol agents’ suspicions.

In a video that the A.C.L.U. obtained during the investigation, a supervisor from the U.S. Customs and Border Protection told investigators from the agency that he did not see “anything harassing” about the May 2018 incident. Havre is a small town, he noted, where “nobody really has much to do.”

“If there’s somebody speaking Spanish down here,” the supervisor said, “all of a sudden you got five agents swarming in like, ‘What’s going on?’ So, Havre is kind of like that.”

The A.C.L.U. also discovered that Mr. O’Neill was a member of the Facebook Group, “I am 10-15,” which included “obscene images of Hispanic lawmakers and threats to members of Congress.”

The U.S. Customs and Border Protection’s Havre Sector field office, which consisted of 175 agents in fiscal year 2018, has jurisdiction over 456 miles of border area.

In 2006, the United States Court of Appeals for the Ninth Circuit ruled that agents from the Havre Sector violated the Fourth Amendment and “lacked reasonable suspicion” when they detained five Hispanic men in 2004.

Ms. Borgmann said the 2018 incident involving Ms. Suda and Ms. Hernandez was not simply an example of “one bad apple” but also of a systemic problem within the Havre Sector.

“I hope it’s recognized as a result of this lawsuit and these women’s courage in coming forward,” she said, “that this is entrenched behavior and it needs to stop.”